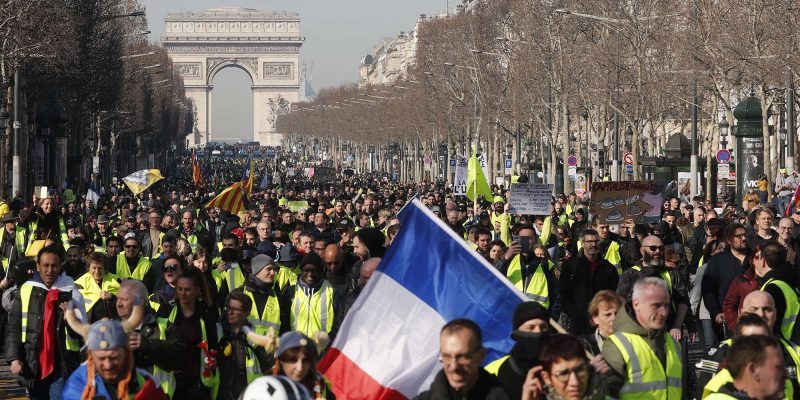 Today in Paris and in several cities all over France and other European countries lived Act XIV of the Yellow Vests movement that instead of getting smaller it’s getting bigger in terms of number of demonstrators and in terms of police brutality by the Macron Regime.

While demonstrators complain that the media in France was only broadcasting documentaries about antisemism the media did not show too much about the massive protests that seem to be covered only by the Russian RT in an evident act of censorship by the illegitimate government of Macron (sorry we are Venezuelans and want Macron to feel a bit what it means to be called illegitimate out of the blue).

Bellow we want to try to represent through a series of tweets of the best video footage we found on todays demonstrations. In an attempt to bypass the media censorship.

Thousands of demonstrators today in Paris:

A 14-week march accounts for a revolution: Thousands of #GiletsJaunes persevere on their demands, supported by 7 out of 10 in #France.#Acte14 footage via @Ozkok_ pic.twitter.com/FFFLk28WKA

Where is the repression in Caracas or Paris?

Russia? Venezuela? No. This is today in Paris, France. Macron’s police use tear gas as thousands of #YellowVests protesters march in Paris for the 14th weekend in a row. #GiletsJaunes pic.twitter.com/na6X6qLFJt

More represion. Those might be Maduro intelligence services infiltrated as French police (sarcasm) ?

Shocking footage of French police assaulting unarmed protesters, including a medical volunteer who is there to help the injured. When will EU leaders condemn the Macron government’s widespread human rights abuses?pic.twitter.com/HGLh2lhbfS #GiletsJaunes #ActeXIV

Yellow Vest activists march in Paris this morning, as anti-government protests take place across France for the fourteenth weekend in a row: pic.twitter.com/Sk2yYsxm0l #GiletsJaunes #ActeXIV

#ACTXIV #Marseille #France Government doesn’t want you seeing this, in case you get any ideas! #YellowVests #GiletsJaunes #PeoplePower pic.twitter.com/oQjmcMA5vW

The French government will probably repeat today that “the movement is running out of steam” and that it is terribly violent … #ActeXIV #France #Giletsjaunes #Yellowvests pic.twitter.com/J9IzybZanl

And more crashes in Champs Ellysses

Macron regime have accused President Maduro’s government of human rights violation even though in recent days there have been several massive demonstrations all over Venezuela from right wingers but also Chavistas and all of them have end up peacefully, unlike France.