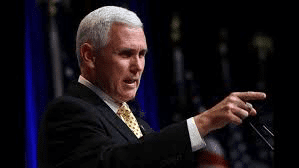 The vice president of the United States, Mike Pence, urged the European Union on Saturday to recognize the opposition deputy Juan Guaidó as the “only” legitimate president of Venezuela, at a time when several European countries block a common position of the block.

In a move that might be evidence of US foreign policy desperation, the Vice President put additional pressure on their European “partners”.

“We must all support the Venezuelan people until freedom and democracy are restored,” Pence said at the Munich Security Conference. The US diplomatic strategy is not showing signs of strengthening and there are declarations of European officials that very frequently contradicts the formal position of their country.

“Therefore, today we call on the European Union to take a step for freedom and recognize Juan Guaidó as the only legitimate president of Venezuela,” said Pence.

Guaidó, 35 years old and deputy of the National Assembly, in contempt of opposition majority, proclaimed himself as interim president on January 23 during an opposition demonstration in Caracas, surprising many, and since then demands the exit of President Nicolás Maduro.

Since then he has received the formal recognition of less than 30 countries, headed by the United States, and that of extremists Venezuelans who have seen renewed in their hope of getting out of the severe socio-economic crisis that afflicts the country.

Pence said that after the United States became the first nation to recognize the parliamentary deputy as head of state, “52 countries, including 30 of our European allies, have followed the example of the United States.” In a counting that might be contradicted by his own words and the real facts of countries that have formally recognize Guaido and reject a peaceful negotiation.

“But it’s time for the rest of the world to take a step forward,” he said.

“Once again, the Old World can adopt a position of support for freedom in the New World. All of us must support the Venezuelan people until freedom and democracy are completely restored.”

In international relations not expressing formally a position means that you support the status quo and that is what actually is happening around the “Guaido recognition” issue. Only 29 country’s have follow to the letter the US script, the remaining countries of the word (179) have opted for either support Maduro directly, support a peaceful negotiation without interfering in internal affairs of Venezuela or have remain silent which plays in President Maduro strategy.

But to many diplomatic experts say that the “recognition issue” itself is over-dimensioned by US propagandistic apparatus because in the 60’s Cuba was subjected to the same strategy and it end up solidifying the Cuban Revolution.