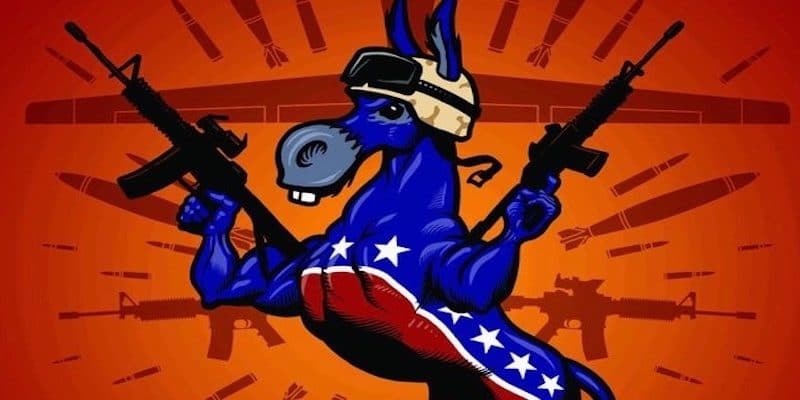 Self-styled liberals believe they are a better class of people than Trump, but are bigger supporters of unjust wars than the so-called “deplorables.”

“Liberals eagerly wait for a war they can believe in.”

The trauma of Donald Trump’s presidency has created continued insanity for American liberals. They were never very trustworthy, due to their abiding belief in United States exceptionalism and an imagined right for it to intervene in the rest of the world as it pleased. Liberals could be counted on to protest wars which killed Americans in Vietnam or in Iraq. But by and large they trust in imperialist dictates if someone they like is in charge and who doesn’t allow too many of their countrymen to get hurt.

Hence their dilemma with Donald Trump. Trump is their anti-Christ, a bad mannered, proudly stupid, racist who expresses the id of the great unwashed deplorable white masses. There are many reasons to oppose him but liberals generally attack from the right. The same people who remember that the surveillance state lied about the WMD threat from Iraq now parrot every word from the same people if they are anti-Trump. Their earlier opposition to war propaganda was more a result of their anti-Bush, anti-Republican stance than anything else. They didn’t really oppose U.S. interventions or stand up for peace. Instead they eagerly wait for a war they can believe in if the rationale is to their liking.

Now this group which labels itself the resistance say nothing about U.S. sanctions that kill Venezuelans and Iranians by depriving their governments of the ability to conduct transactions needed to secure food and medicines. When their favorite news outlets proclaim Evo Morales to be a “strongman” and make the case for the coup that ousted him they go right along and make the case for imperialism carried out by the president they allegedly dislike so much.

The latest example of the liberal herd mentality comes in the form of love for the military. Liberals don’t associate with this institution themselves. They wouldn’t think of sending their kids to the army or the navy. But suddenly they have a love for senior officers if they voice disgust with Trump.

“Liberals suddenly they have a love for senior officers if they voice disgust with Trump.”

They dropped napalm on Korea when ordered to do so. They did the same in Vietnam. They invaded Iraq and as Chelsea Manning and Julian Assange revealed, they mow down innocent people and laugh about their slaughter. This is not a group that liberals usually admire.

But Trump is a shock to their image of themselves and of their country. Most liberals want to be flag wavers as much as conservatives do. So they fantasize about a nation that is basically good with a little injustice that can be fixed when a Democrat is in the White House. The inequality, racism, and international aggression that are at the heart of American history can be forgotten. Trump’s overt racism and general buffoonery make a lie of their beliefs and make them vulnerable to lies and propaganda.

The corporate media aid in the confusion. Trump’s decision to intervene in the court martial of a Navy Seal convicted of a war crime is a legitimate news story. The resignation of the naval secretary because he opposed the interference was significant. What is questionable is the lack of attention given to America’s continued presence in Iraq in the first place. Suddenly the New York Times gives op-ed space to former secretaries of the navy who don’t just express disagreement with Trump’s decision but also label Trump as a man who doesn’t share their “values.”

“Most liberals want to be flag wavers as much as conservatives do.”

If liberals were to be taken seriously they would question military values, question the nearly 20-year long presence of the U.S. in Iraq and Afghanistan, and question why they get the vapors over anyone in uniform. These wars are the longest in history and are war crimes by definition. That is the point to be made and not that Trump upsets the tradition of letting lower ranked servicemen take the fall for crimes committed with the permission of Congress, presidents and the corporate media.

Trump is proof that appearance makes all the difference. When Obama was president the U.S. bombed an Afghanistan hospital run by Doctors Without Borders and killed 40 people. That act is the inevitable consequence of military occupations, and obviously not a force for good for the dead people. Obama’s drone strikes weren’t opposed by anyone in Washington and Democratic presidential candidates expressed full confidence in Trump’s sanctions that are killing Venezuelans.

The idea of American exceptionalism must be discarded completely. When that happens there will be no foolish notions of good and bad military decisions. There will be an appreciation for civilian government and questions about why the U.S. should have 800 military bases around the world. Of course that would mean questioning nearly every premise of political decision making in this country. That is what liberals would do if they were as smart as they think they are.

There is something even more sinister about this newfound affection. The people who could be counted on to protect civil liberties now ask Facebook to be a fact checker. Facebook takes orders from the Atlantic Council, a NATO funded right wing think tank. “Fact checking” from Facebook leads to censorship of black leftists and Palestinians and anyone else who upsets the established order.

When leftists were targeted as Russian assets and Google began to de-rank websites like Black Agenda Report the liberals didn’t say anything then either. They wholeheartedly believed in tales of foreign intrigue that put Trump in office. Now their derangement is so complete they will even support military rule or some other effort to take what is left of our rights. The “resistance” are a clear and present danger to us all.