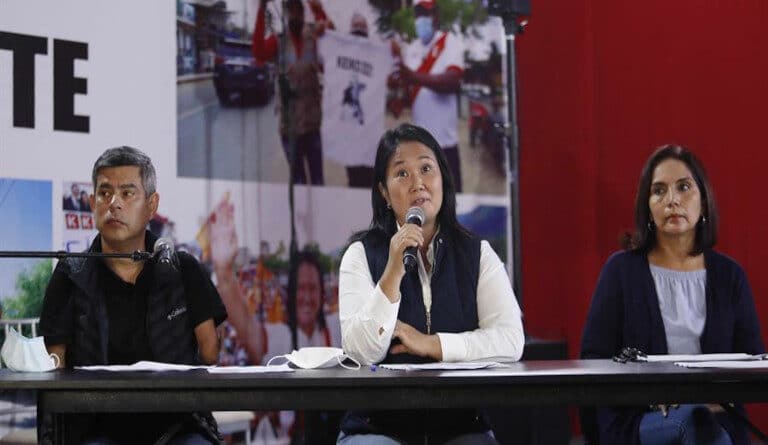 Keiko Fujimori, presidential candidate in Peru, has received a wave of rejection and criticisms for her claims of ”indications of fraud” against the party of her rival Pedro Castillo, Prensa Latina reported.

Election observers, the National Office of Electoral Processes (ONPE), election experts, and Castillo’s party Peru Libre and its allies, have all flatly ruled out the possibility of fraud in the Peruvian presidential election as alleged by neoliberal candidate Fujimori.

Castillo’s left-wing party rejected the statements made by Fujimori during a press conference, where she claimed that about 1,300 votes had been challenged by representatives of Peru Libre, which has allegedly adversely affected Fujimori, whom Castillo surpassed yesterday in the yet unfinished vote count.

”Peru Libre never resorted to electoral fraud,” stated Castillo. ”On the contrary, we were always a victim of it, and despite everything we knew how to face it and win.”

The leftist candidate had also alluded to the issue of fraud last night in a brief address to his followers who also fear the possibility of fraud carried out against them. Castillo reassured his supporters that, if necessary, ”I will be the first to enforce the will of the people.”

Moreover, international observers certified the normality of the electoral process, as did the local organization Civil Transparency Association, the head of which, Adriana Urrutia, verified the same through the reports of 1,400 observers of the organization deployed throughout the country.

”We have found no evidence for which we could speak of electoral fraud,” Urrutia concluded.

Additionally, ONPE clarified that only 461 ballots have been challenged on specific points and not questioned in their entirety. This contradicts Fujimori’s allegations that the challenge affected over a thousand votes from pockets that favor her party.

According to ONPE, other alleged irregularities denounced by Fujimori as evidence of fraud are only isolated cases which are currently under investigation.

Electoral experts Jorge Jáuregui and José Tello, who acted as observers during the second round of the presidential election in Peru, pointed out that the vote counting process was progressing normally, and that the incidents reported by the Fujimori’s party Fuerza Popular were common in number and characteristics to all electoral processes in any country.

They also agreed that there has only been one overall refuted electoral tally, and ONPE specified that electoral records can only be annulled for limited reasons, such as the registration of more votes than the corresponding number of voters at a particular voting center.

Anahí Durand, a member of Castillo’s technical team, considered it deplorable that, when the vote count is unfavorable to Fujimori, she would allege fraud without consistent evidence, tacitly denying the legitimacy of the elections and of democracy itself.

Journalist César Hildebrandt, on his part, referred to the recent wave of attacks on the National Electoral Jury (JNE) by the media and Fujimori’s political supporters. According to Hildebrandt, these attacks were aimed at trying to subordinate the electoral court since the Fujimori campaign knew that she could lose, and now that it is evident that she has lost, her campaign is launching the fraud thesis.