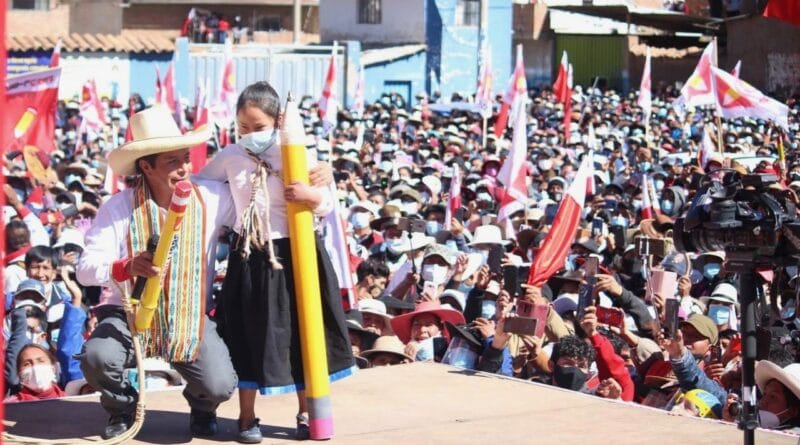 500 years of colonial history, 200 years of life as a republic, and 40 years of experience of the rural and urban peasant patrols movement, to understand a subject and a process that come from afar

Ahead of Peru’s historic presidential elections on June 6, Lautaro Rivara spoke to Santos Saavedra Vásquez, president of the National United Center of Rural and Urban Peasant Patrols (CUNARC) of Peru. They discussed the second round of presidential elections on June 6 and what the upcoming electoral process means to the rural, peasant and Indigenous communities of the country, with Pedro Castillo, a member of the peasant patrols movement, as the leading candidate.

Lautaro Rivara: You are from the province of Cajamarca, a historical site since the rebellion of Tupac Amaru II, and also, as we know, site of extractive mining ventures. What are the demands of deep Peru, the interior, the rural areas, in a country so centralized in the capital Lima?

Santos Saavedra Vásquez: I am here [in Cajamarca] where the Republic was founded. We are also in the bicentennial year. 200 years have passed, but the “deep Peru” has been permanently excluded and has not been taken into account by the State in public policies. This exclusion has gotten worse with the policies of the neoliberal model over the past 30 years, through which we have been marginalized in all respects.

We have a policy that is too centralist in terms of development. More than 70% of the budget of the Republic is concentrated in the central government. We also have subnational governments such as governorates and mayoralties, with unmet needs. We have social gaps that have not been resolved: basic services, the right to education, health, the issue of road interconnection, the right to Internet connection in this moment of virtuality, etc. So much wealth has been extracted from the interior of the country, from the communities and people of deep Peru, but it has not been distributed.

Everything has always been imposed from above: presidential candidates, development projects, everything. The real need of people has not been taken into account. We are a very diverse country, very rich in water, hydrocarbon, mining, and fishing potential. We have not seen any of this spill over in favor of the people.

LR: At the time of assuming the presidency of the CUNARC, you mentioned that the whole of Peru would become the territory of the ronderos (peasant patrolmen). Are we seeing that today? Could you explain, for our readers, who are they, what do they do, and where do they come from?

SS: We identify ourselves as descendants of the Indigenous people. During and after the colonization, and for more than 40 years, we have always reunited and recreated. We are collective organizations, rooted in the rural towns of the country. We are based on an organization with principles, values, mysticism and discipline.

We are especially responsible for self-governance. We provide our own collective security. We exercise our own administration of justice. We defend the right to territory, for example land and water, when there are anti-extractive struggles. We also work and engage in dialogue with the State. This organization was created more than 40 years ago in the north of Peru and spread throughout the national territory, reaching a great prestige in the population and visibility with regard to the State. The organization has achieved recognition within the political Constitution in its functions.

We are in some way a parallel and more effective power than the judiciary. That is why the State has always responded by criminalizing, persecuting, accusing us of being outside the law, of violating human rights. Our commitment to the country is to make it a territory of the ronderos,  so that the departments that still do not have peasant patrols, in the rural areas, in the center and the south, have them.

Our strongest presence is in the north, but the creation of peasant patrols is done by free determination and will of the citizens, of the men and women who inhabit a given territory. There are no impositions but a process of consciousness. We have made progress in building an organic structure: we organize patrols at grassroots, district, provincial, regional and national levels. Our organization is autonomous, independent of the governments in power.

LR: The ronderos, but also Pedro Castillo and Free Peru party, have popularized the demand for a constituent assembly. What kind of transformations, in your opinion, are the most important and urgent for Peru? And what would it mean, for example, the construction of a plurinational state?

SS: Our political Constitution was imposed by the dictatorship in the 1990s. A completely neoliberal charter was built to meet the needs of the economic power groups and political parties, whose members are almost all in prison today. This Constitution excluded us, it was not made by the organized people. It does not represent the aspirations of the majority.

In a new Constitution, we need to look at the economic chapter, since our strategic resources, with neoliberal policies, have been completely handed over to the market, to the private sector. In the pandemic, we saw that the State is deficient and that the Ministry of Health lacks the necessary equipment due to the privatization of the healthcare sector. The economic groups did not express any kind of solidarity in this situation. The State should not relinquish its authority and submit to large corporations.

In this sense, we need to recover our strategic companies that were given away by neoliberal governments. We propose a territorial reorganization to see where certain activities are carried out, and to ensure that there is a productive diversity, so that Peru is not just a stone seller and an exporter of raw materials. We aspire to be an industrialized country, because we have the elements for it.

Furthermore, we propose a Constitution of a plurinational type, since here we have different nationalities, both in the Andean and Amazonian areas, and for the moment they are completely excluded from decision-making in State policies. Our struggle is to now win the electoral process, and then start a constituent process. We are building our own path, without tracing or copying. The right-wing’s campaign has said that we want to copy the model from other countries, and it is not the case. Here, we had the brilliant mind of José Carlos Mariátegui, one of the most important revolutionaries in Latin America, and he was clear on this: we have to carry out an original revolutionary process.

LR: How do you explain the result of the first round, and how do you analyze the possibilities of the elections called for June 6? What would you expect from an eventual presidency of former rondero and rural teacher Pedro Castillo?

SS: This result was not expected by the right-wing or the economic power groups. Nor did the large media groups, which have all the power at their disposal, expect it. On this occasion, as an echo of the bicentenary and the resistance to so many decades of deception and betrayal by different governments, a great hope emerges with a brother, a peasant, who comes from the interior, from the cradle of the peasant patrol movement.

Pedro Castillo has surprised many people. The social protests that had been taking place in the streets have been transferred to an electoral protest, and it is where all these gentlemen, who were involved in corruption and armored and protected among themselves, were punished. The population is totally sated. This situation is historic. The population feels completely identified with a peasant candidate like Castillo. The ronderos, the peasants, the farmers, the workers, the teachers, all are part of this process.

There is a fight between two opposing poles. The other candidate, Keiko Fujimori, expresses the legacy of neoliberal dictatorship and authoritarianism. She wants to continue with the same model that has already failed, with the same exclusive Constitution. The other option arises from the people of deep Peru: it is a proposal for a patriotic, democratic government with a broad social base, which could lead to the convocation of a constituent assembly.

These are the two models in dispute. We must win and know how to govern. That is our challenge, and we have worked so hard for that. We hope that Peru changes, also in the context of Latin America. We are facing a historic turning point. Our campaign and our candidate is popular, and this is evident in every place where our ideas and that of our candidate’s are presented.

LR: Do you think there is any risk of electoral manipulation, fraud, or even a coup d’état that could prevent a legitimate victory of Pedro Castillo in this run-off?

SS: The right-wing is capable of doing that and much more. We have already seen this in other situations and in neighboring countries. They are capable of resorting to violence, to other means. They have considerable experience in fraudulent practices, particularly with the electoral authorities that we have. In the first round, for example, ballot papers marked in favor of Keiko Fujimori were found. In any case, we are working to ensure clean elections, because the people work clean. We are preparing to defend the triumph of the people’s candidate.

LR: Conversely, what would you expect from a government of Keiko Fujimori, who has received the support of a conservative arch that runs from the American Popular Revolutionary Alliance party (APRA) to Mario Vargas Llosa, passing through the United States and large press corporations?

SS: We are not surprised in any way that the right is uniting, because they are part of the same model and the same Constitution. Alberto Fujimori’s dictatorship was terrible in our country: human rights were violated, students and teachers were murdered, all strategic companies in the country were sold, corruption was installed with great force, all the powers of the State, such as the prosecution, the electoral authorities and the judiciary, were completely controlled. Under the pretext of terrorism, they committed terrorism: we have more than 63,000 victims of that era.

That is why the dictator Alberto Fujimori is in prison, sentenced for crimes against humanity that he has been purging along with his other collaborators. The Fujimorist dictatorship has been the great cancer of the Peruvian State. It has completely destroyed the country. Despite this, they continue to hold some part of the power and have an important presence in parliament. It has been 30 years since the 1990s, with successive governments that have continued the same economic and political model.

We want to finally get rid of this neoliberal dictatorship. They talk about corruption, but Keiko Fujimori already has a request for a 30-year sentence against her in the Odebrecht corruption case, but the judiciary still gave her conditional freedoms to participate as a candidate. What they want is to avoid paying for the crimes they have committed and to save themselves and their collaborators from prison. That is why, they now speak with one voice, attacking the popular sector, saying that the economy will be destroyed, that investments will go away, that communism will come, that we will do the same as the neighboring countries.

Anyway, we will be well alert to anything that may happen. We welcome the support of social movements and progressive leaders in Latin America and we look very closely at the process of building sovereign governments, not subject to imperialism.