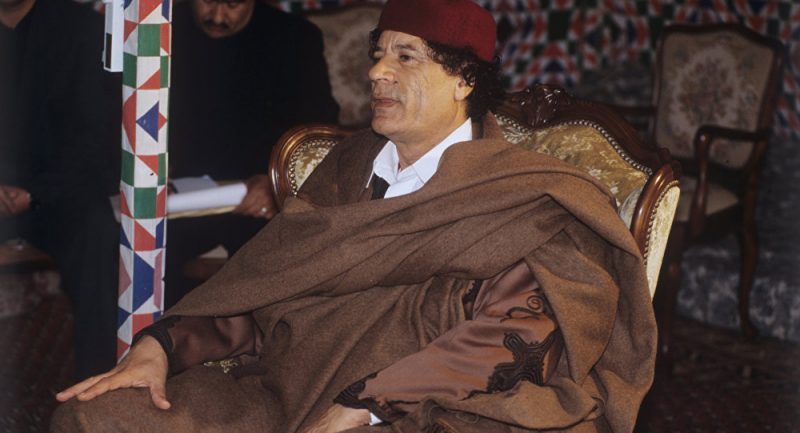 Following the exposure of Belgium’s mishandling of Muammar Gaddafi’s frozen funds, it turns out that the British government has been collecting taxes on the former head of state’s blocked UK assets. British and US lawmakers have discussed the legality of London’s move and shared prognoses on whether the money will ever be returned to the Libyans.

Neither the late Muammar Gaddafi nor the citizens of Libya have access to the whopping £12 billion in assets the former head of state had in the UK, but Her Majesty’s Revenue and Customs has collected around £17 million in taxes on the assets since 2016, according to the Northern Ireland Affairs Committee’s latest report.

The disclosure has prompted some British lawmakers to demand that London use the money earned in interest on the frozen accounts to compensate the victims of the Irish Republican Army (IRA); the organisation was supplied with weapons and explosives by the Gaddafi government in the 1980s.

The question then arises: it is legal to take money in taxes from the frozen assets of another state?

‘Nothing But Old-Fashioned Bank Robbery’

“In my view there is no legality in that”, said American lawyer and peace activist Dan Kovalik. “This is money that properly belongs to the Libyan people. In fact, what they are doing amounts to theft from the Libyan people, who really could use the money after the NATO bombing of Libya. They left Libya a shattered country. The West has done nothing to help it rebuild. And then to steal assets like that… is not only illegal but it’s immoral”.

Kovalik underscored that it is up to the government of Libya how the dividends from the frozen assets should be distributed.

“Really, it should be turned over to the authorities in Libya who need to decide how that is distributed; it’s not up to the Western powers to decide for Libya what to do.”

According to the lawyer, it would be legitimate if the Libyan authorities sued the British government in court to get their money back. However, he expressed doubt that it would happen anytime soon, since Libya has been left without a unified national government.

“This was nothing but old-fashioned bank robbery,” he opined. “I don’t think there was ever an intention to give that money back.”

It is not the first time that Gaddafi’s frozen assets have been mishandled. In autumn 2018, the Belgium government was accused of paying out interest and dividends on the colonel’s bank accounts. Following Gaddafi’s death in 2011, about 16 billion euros belonging to the colonel were frozen in four Belgian banks in accordance with a UN resolution. However, an investigation conducted by Politico magazine indicated “regular outflows of stock dividends, bond income and interest payments to unknown beneficiaries with bank accounts in Luxembourg and Bahrain” between 2011 and 2017.

“I think that the problem is that there is no true rule of international law,” said Kovalik, commenting on the Belgian case. “The way the world works is the more powerful countries get what they want by force or other ways. Look at Western Europe: it was all built on the backs of people from the poor countries with their resources. The museums in Western Europe hauled all the antiquities of peoples in Africa, the Middle East, everything has been stolen there is nothing new.”

‘Law Has Nothing to Do With It’

Francis Boyle, a professor of international law at the University of Illinois College of Law, echoed Kovalik’s concerns by saying that Washington and NATO member states “have been stealing Libyan assets and oil anywhere and wherever they can since they murdered Gaddafi”. According to him, “law has nothing to do with it except for being window-dressing for their thievery”.

“The United States, the United Kingdom, France, Italy, Canada and the other NATO states have destroyed Libya as a state, inflicted outright genocide against the Libyans, have stolen their oil, and are now in the process of looting Libyan assets all over the world,” the professor highlighted.

He suggested that Western politicians involved in the Libyan war, including former UK Prime Minister David Cameron and former US President Barack Obama, should be “prosecuted and put on trial by the International Criminal Court for war crimes, crimes against humanity and genocide”.

‘This is Entirely Legal Under UN, EU or UK Law’

Franco Rizzuto, professor of European Law at Edge Hill University, UK, holds a different stance. By his account, “taxes can be collected by the HM Revenue and Customs where the frozen assets of designated persons can be released and used under licensed by the Office of Financial Sanctions Implementation (OFSI)”.

“This is entirely legal under UN, EU or UK law,” he opined.

However, he refuted the idea that money earned in interest on Gaddafi’s frozen accounts would be handed over to the victims of IRA terrorism, as British lawmakers proposed: “Those assets would first have to be handed back to the Libyan authorities that are currently in meltdown,” the professor emphasized.

He condemned Belgium’s misconduct related to Gaddafi’s frozen assets, presuming that “it was a case of a mistake or incompetence in the Belgian Ministry of Finance” since a EU member state “cannot unilaterally decide to opt out of UN-authorized and EU-implemented asset freezes”.

As for Libya, “until and unless, [it] becomes a functioning state it is unlikely that those funds will be returned”, Rizzuto summed up.

The Libyan Civil War erupted in 2011 when Muammar Gaddafi’s opposition backed by NATO overthrew the government and dragged the country into a longstanding conflict. On 26 February 2011 the United Nations Security Council passed a resolution freezing the assets of Gaddafi and his associates. Currently, Libya is divided into two parts: one governed by the internationally recognized Government of National Accord headed by Fayez Sarraj in Tripoli and the other by the Tobruk-based House of Representatives (HoR), which is allied to the head of the Libyan National Army, Field Marshal Khalifa Haftar.