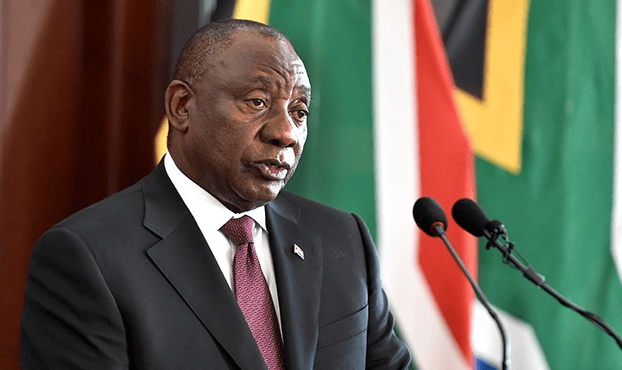 South African President Cyril Ramaphosa says his administration will not let the country’s economy get affected by the U.S.-China trade friction, which he says is born out of “jealousy.”

“We cannot afford to have our own economy being held back because there is this fight that the U.S is fighting born out of their own jealousy,” President Ramaphosa said while addressing the inaugural Digital Economy Summit in Midrand, Gauteng.

The 66-year-old particularly took issue with the U.S. sanctions against Huawei, saying those strains were holding many other country’s back in their plans to venture into the 5G technology.

“Now, there is a stand off between China and the United States. The United States has been unable to imagine a better future which goes beyond 4+1 G. Where they have been unable to imagine what 5G can offer. And where now, clearly, they are jealous. They are jealous that a Chinese company called Huawei has outstripped them; and because they have been outstripped, they must now punish that one company and use it as a pawn in the fight that they have with China. And the problem is that in the end – and this I got very clearly from our telco companies – all these telco companies got together in one letter head, wrote me a letter and said Mr. President, this tussle that’s happening between china and the US around a company called Huawei is going to hit us, because we want to go to 5G and only this company Huawei can lead us to 5g and the us is now punishing them,” the South African leader said in a hard-hitting speech.

While addressing the 23rd Saint Petersburg International Economic Forum held in June, President Xi invited everybody to jointly collaborate on building 5G network technologies, which are labeled as game changers in the world.

In his speech on Friday, President Ramaphosa reiterated this, saying the 5G technology was the right step forward for his country.

“We have to say that we support a company that is going to take our country and indeed the world to better technologies and that is the 5G. We support them (Huawei),” he said.

The South African leader also expressed his hope that the announcement that the U.S. would ease sanctions against the giant telco would pave the way for the spread of 5G technology across the world.

“We are pleased that at the G20 summit, China and the U.S. were able to meet and they said they will relax some of the strains that had been imposed on Huawei, so that it can continue to deal with various other companies. It is important that even if there is a trade war of whatever, it should not spill over to disabling various countries in the world and various peoples in the world from what is a fight between just two countries. We want 5G and we know where we can get 5G,” President Ramaphosa said.

U.S. President Donald Trump announced the intent to ease the sanctions after meeting with President Xi on the sidelines of the G20 summit in Osaka, Japan.

President Trump said he would allow American companies to resume sales to Huawei of products that don’t pose a security threat.