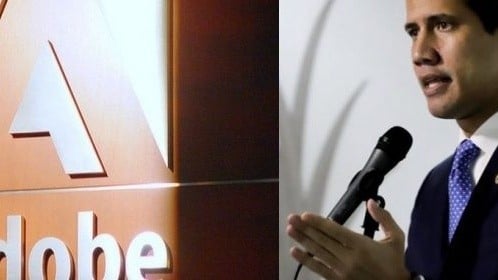 The US software company Adobe informed via email that its services will continue to be available in Venezuela, stating that it received “a license from the United States government,” which will allow it to continue offering its products and services despite of the unilateral coercive measures or “sanctions” that the Donald Trump administration implements against Venezuela.

They note in their mail, sent this Monday:

“We are pleased to share that in the few weeks since our last email, we have received a license from the United States government to provide all of our Digital Media products and services in Venezuela. As a result, your access to Creative Cloud and Document Cloud will not be interrupted and you will continue to have access to all the same products and services. ”

” After discussions with the US government, we have been granted a license to provide all of our digital media products and services in Venezuela.”

They also inform their customers that, if they lost access to their Premium accounts, they will recover it within a week at the latest.

The announcement was made on October 28, the last day Adobe had given its Venezuelan users to withdraw any file of their property from their services, because, from that moment on, they no longer would have access to them.

When asked about the issue, the so called “interim president” of Venezuela, Juan Guaidó, said that work was being done to get rid of the measure.

“We are making efforts and hope that in the next few days that measure can be lifted, because it definitely has nothing to do with the common citizen but with what he did and generated (President) Nicolás Maduro,” he said.

On October 7, the Adobe company sent an email that said in part:

“Due to the recent Presidential Executive Order in the United States ( Executive Order 13884 ) concerning activities with the Venezuelan government, Adobe is no longer authorized to provide you with access to software and services, nor to allow you to make new purchases. In order to adapt to this change, we offer you a prior notice and a grace period until October 28, 2019, so you can download all the content that you have stored in your Adobe account. After October 28, 2019, you will no longer have access to your account, Adobe.com or Adobe software and services”.

Initially Adobe had informed that its users would not have access to any service or software, “not even free ones”, including access to the service for photographers and Behance creatives, nor would they be entitled to a refund if they had paid for their services in the “cloud”. But a few days later they rectified both points. On October 11, the Oracle software company also announced that it was canceling its contracts with Venezuelan partners because of the “sanctions.”

Free software as a countermeasure
Since 2003, the Venezuelan State has entered into a process of migrating its applications and technological platforms to free and open source software, which provides numerous alternatives in the world of graphic design.

Some of the best known are Gimp (image and photo editor), Krita (image editor that is also widely used for drawing and illustration), Blender (award-winning application for 2D and 3D animations, as well as visual effects), Inkscape ( vector drawing), DarkTable (organization and digital development for photographers), Audacity (audio editor), among many others. All can be downloaded for free online.

The Venezuelan government has distributed for free several million mini-laptop computers to elementary students under the “Canaima Educational” project, which uses an operating system of free software (Canaima GNU / Linux) that includes these free applications.

On October 10, in an interview on the Al Aire program, which broadcasts Venezuelan Television, the president of the National Center for Information Technology (CNTI), Kenny Ossa, said that the decisions of companies such as Adobe are an opportunity to strengthen the Free technologies supported by the government of President Nicolás Maduro.

“From the National Information Technology Center we are generating transformative awareness that the free tools we have as alternatives to deal with the blockade are very professional and have been in the market for more than 10 years. Free software and liberating technologies are the only way to win this battle of independence,” he stressed.