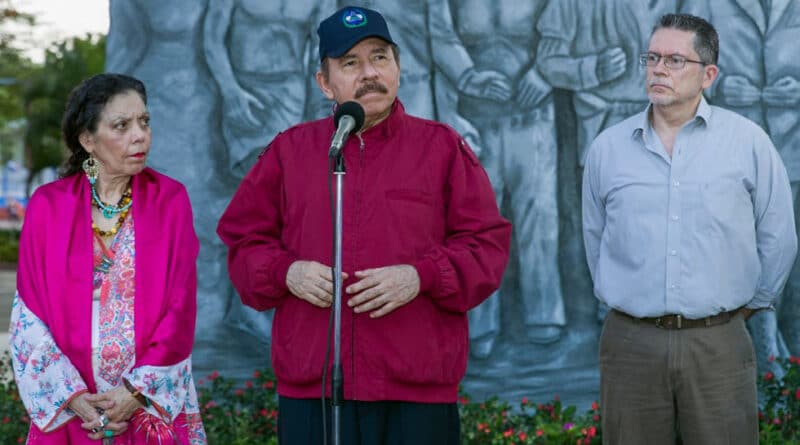 A century and a half has shown us that American meddling in Nicaragua is never about improving the lot of the people of that nation, and only ever about furthering Washington’s imperialist agenda.

The US government is back at it. It is again expressing concern about the state of democracy in Nicaragua, and conjuring up a new round of punitive sanctions against that tiny country to allegedly prevent dictatorship from taking hold there.

The newest sanctions bill against the country is titled “Reinforcing Nicaragua’s Adherence to Conditions for Electoral Reform (RENACER) Act.” As the Senate version explains, “This bill requires the Executive branch to align US diplomacy and existing targeted sanctions to advance democratic elections in Nicaragua, and includes new initiatives to address corruption, human rights abuses, and the curtailment of press freedom.” Sadly, many US non-governmental organizations and ‘intellectuals’ who should know better have sided with the government in its attack on Nicaragua.

However, a brief history of US involvement in Nicaragua is worth recounting here to fairly assess the government’s bona fides regarding its interest in democracy in that country. The first instance of US intervention in Nicaragua came in the form of William Walker in the mid-19th century, at around the time the Monroe Doctrine, by which the US proclaimed its sole prerogative to dominance over the Western Hemisphere, was announced. William Walker declared himself president of Nicaragua, reinstituted slavery there, and burned down the historic city of Granada for good measure, yet his foray into country was supported by many Americans as an exercise in progressive advancement.

John J. Mangipano explains this phenomenon well in his peer-reviewed dissertation titled ‘William Walker and the Seeds of Progressive Imperialism: The War in Nicaragua and the Message of Regeneration, 1855-1860’. As he explains: “For a brief period of time, between 1855 and 1857, William Walker successfully portrayed himself to American audiences as the regenerator of Nicaragua. Though he arrived in Nicaragua in June 1855 with only fifty-eight men, his image as a regenerator attracted several thousand men and women to join him in his mission to stabilize the region. Walker relied on both his medical studies as well as his experience in journalism to craft a message of regeneration that placated the anxieties that many Americans felt about the instability of the Caribbean. People supported Walker because he provided a strategy of regeneration that placed Anglo-Americans as the medical and racial stewards of a war-torn region. American faith in his ability to regenerate the region propelled him to the presidency of Nicaragua in July 1856. … Though William Walker did not ultimately succeed as a regenerator, American progressives such as Theodore Roosevelt revived his focus on medical and racial stabilization through their own policies in the Caribbean, starting in the 1890s.”

As Mangipano concludes, “The continuity existing between these groups of imperialists suggested that the regenerators, despite their temporary failures, succeeded in nurturing ideas about why Americans needed to intervene in the Greater Caribbean.” This impulse to “progressive imperialism” – now called by the kinder and gentler-sounding “humanitarian interventionism” – continues to motivate even many US leftists in their attitudes towards Nicaragua and other countries of the Global South, and with the same terrible results.

Meanwhile, in the name of progressivism and democracy promotion, the US would go on to send the US Marines to occupy Nicaragua in the early part of the 20th century and set up the Somoza dictatorship that ruled Nicaragua with an iron fist for over four decades from 1936. The Marines were routed by Augusto César Sandino and his gang of merry men and women, Sandino was later assassinated, and the Somozas held control. America would then organize, finance, and direct the murderous ex-Somoza National Guardsmen in the form of the Contras to try to destroy the Sandinista Revolution, which finally overthrew the US’s beloved dictatorship in 1979. Washington tried to coerce the Nicaraguan people into voting against the Sandinistas in 1990 with the threat of continued war and brutal economic sanctions. Then, in 2018, they supported violent insurrectionists who terrorized Nicaragua for months in an effort to topple the very popular Sandinista government that was re-elected in 2006.

In short, there is a grave threat to democracy in Nicaragua. But it is not from Daniel Ortega and the Sandinistas, who have built the first democratic state in that country in years. Rather, it is from the United States and the “useful idiots” who continue to believe the US is somehow attempting to bring democracy, despite all evidence to the contrary.

One way the US is threatening democracy is by funding destabilizing and anti-government efforts to the tune of millions of dollars. Nicaragua has responded, as any self-respecting nation would, by punishing those facilitating such foreign interference pursuant to its Law 1055, titled ‘Law for the Defense of the Rights of the People to Independence, Sovereignty, and Self-Determination for Peace’. As Stephen Sefton, an educator and decades-long resident of Estelí, Nicaragua, explains,

“Under the law, it is a crime to seek foreign interference in the country’s internal affairs’ request military intervention; organize acts of terrorism and destabilization; promote coercive economic, commercial and financial measures against the country and its institutions; or request and welcome sanctions against the State of Nicaragua and its citizens.

“In addition, Cristiana Chamorro of the Violeta Chamorro Foundation, Juan Sebastián Chamorro of the Nicaraguan Foundation for Economic and Social Development (FUNIDES), Félix Maradiaga of the Institute for Strategic and Public Policy Studies (IEEPP) and Violeta Granera of the Centre for Communications Research (CINCO) may also face charges for money laundering and breaking the ‘Foreign Agents’ law which requires all organizations receiving finance from overseas [in this case, the US] to register with the authorities, report the amount of money received and how it is used.”

However, as Sefton emphasizes, “Despite numerous reports in international media to the contrary, none of the people arrested had been selected by any of Nicaragua’s political alliances or parties as possible candidates for the upcoming general election on November 7th this year. Cristiana Chamorro, Juan Sebastián Chamorro, Arturo Cruz and Félix Maradiaga had earlier stated they aspired to the candidacy of one of the political parties, most likely the Citizens for Liberty political alliance. But none of them was formally under consideration. In any case, as many observers have noted, the figure of their possible candidacy in the elections has served as a smokescreen to distract from the criminal charges against them, for which they would face prosecution in practically any country in the world.” Note that last, important phrase.

To put it bluntly, it is the US which, as it has now done for about a century and a half, is trying to dictate to the Nicaraguan people the type of government and economic model they should choose. As an independent, sovereign nation, Nicaragua has every right to push back against this incessant meddling.

I’ve just returned from Nicaragua, where, along with other members of an international delegation, I witnessed first-hand the Nicaraguan people’s enthusiasm for the Sandinista Revolution on its anniversary, July 19. I saw the crowd of thousands assemble in Pope Paul II Plaza, in Managua, to celebrate this extraordinary event, in which the Sandinista Front, led by Daniel Ortega, overthrew a dictator heavily armed by the US government. Our delegation visited Masaya, which was bombed from the air by Somoza in the final days of his brutal rule. It is continuing to rebuild after the destruction wrought by the neo-Contras of 2018, who, with US backing, laid siege to the city and terrorized it for months, until the historic combatants who defeated Somoza routed them with the assistance of the police.

During our trip, we saw for ourselves the incredible advancements of the Sandinista government, which is providing free healthcare and education to all Nicaraguans. We witnessed the children, who had suffered such poverty and deprivation during the Somoza years and the Contra War that followed, attend school and play in the beautiful parks erected across the country by the Sandinistas. We traveled throughout Nicaragua on beautifully paved roads that once were dirt and stone, if they existed at all

I myself travelled on those dirt roads in 1987 and 1988, when I visited Nicaragua for the first time. Back then, I saw children dressed in rags and without shoes, barely able to get enough to eat because of the US sanctions and the brutal war. One does not see that type of destitution in Nicaragua now, and that’s thanks to the Sandinista Revolution, which, contrary to mainstream claims, has stayed true to its values of defending the poor and the most vulnerable.

Nonetheless, the US is intent on destroying it, and the progress it has brought for the Nicaraguan people. And the people are fully aware of this, and that is why 85% of those polled oppose foreign interference in their country, just as any self-respecting nation would. I stand with them in denouncing US interference, sanctions, and aggression toward that little country which has mightily stood up to the Goliath of the North. In this Biblical struggle, all my support is with David.