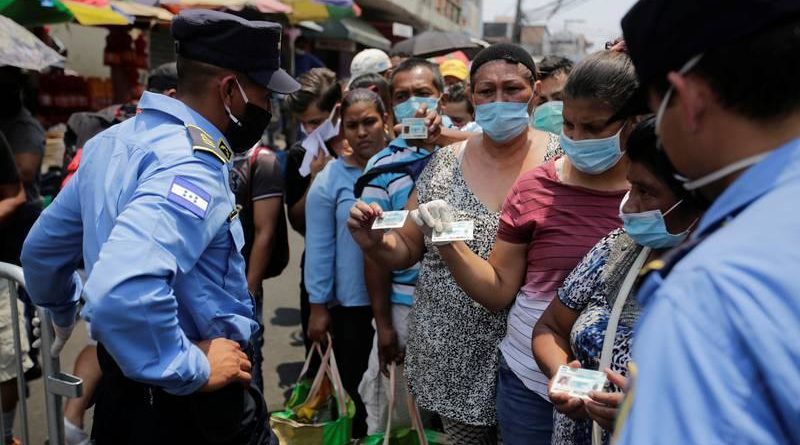 On May 5, a group of Afro-indigenous Garifuna men stood guard at the entrance of La Travesía community in the department of Cortes in northern Honduras. The men were fumigating vehicles, documenting the traffic transiting through their community, and implementing other biosecurity measures as part of community-led prevention efforts to stop the spread of COVID-19.

In the afternoon, a police vehicle arrived and stopped at the checkpoint. The Garifuna men were told they had to disperse and could not put up a check-point, which according to the police, is illegal. When the local residents insisted on maintaining it, the police threatened to return with a military convoy and to launch tear gas to break it up. The community refused to budge.

The measures at community access points are just one of many strategies that local Honduran communities are using to protect themselves. According to Miriam Miranda, the General Coordinator for the Black Fraternal Organization of Honduras (OFRANEH) who spoke on a May 6th webinar organized by the Honduras Solidarity Network, “We initiated the creation of COVID-19 attention centers in the communities. We activated networks that have historically operated in the communities. One of the fundamental aspects is that we decided that it was urgent and necessary to create solidarity networks to protect our elders, not just because of their physical vulnerability but because they are the repositories of Garifuna culture and knowledge.”

Miranda also explained how Garifuna leaders in over 26 communities are offering workshops on medicinal plants that can be used to strengthen the immune system and organizing community food distribution projects.

Community-led efforts are inspiring for many but they are also a sign of citizen mistrust of government COVID-19 management and mitigation efforts led by President Juan Orlando Hernandez and Honduran state security forces. From the time that a few cases of coronavirus were reported in Honduras, Juan Orlando Hernandez imposed an absolute nation-wide curfew and partially suspended constitutional rights including freedom of expression. Military and police set up checkpoints all around the country to enforce the curfew.

In response, all around the country, many began to protest insisting that they could not afford to lockdown. Large protests organized by hungry and poor Hondurans that cannot work or have been fired from their jobs, are broken up with tear gas and live bullets fired by state security forces. Thousands of people have been arrested.

An already difficult political, human rights and economic situation in Honduras is being exacerbated by the pandemic. The crisis that led to the exodus of Hondurans to the southern U.S. Border lay bare in 2019, the level of the poverty, desperation, and political crisis unfolding in the country over 10 years since the 2009 U.S.-backed coup d’état. Like in many places around the world, the pandemic is only worsening an already terrible and desperate situation. At the time of writing, the Honduran government has reported 1,685 COVID-19 cases and 105 deaths and the numbers continue to grow.

In alleged efforts to minimize the impact of the pandemic, the Honduran Congress approved over $888 million including loans from international financial institutions like the World Bank and International Monetary Fund. Despite these efforts, Hondurans are convinced that the government has no intention of equipping the public hospitals or helping those in dire need citing the “corruption pandemic” that has totally depleted public institutions, particularly the healthcare system, for years.

Sure enough, it did not take long for the first scandal to erupt. On April 27, the Anti-Corruption Council (CNA) published a report outlining the most recent COVID-19 corruption scandal involving four companies – three Honduran and one based in the United States – that were contracted by the Honduran government to provide coronavirus biosecurity equipment to hospitals. According to the report, the contracts overvalued the purchases of N95 and disposable surgical masks by $2.3 million and all four companies are linked directly to family members of the National Party, the current party in power.

A few days after the CNA report, another scandal hit the Honduran media calling into question, yet again, the legitimacy of the government.  On April 30, the U.S. Department of Justice (DOJ), Southern District Court of New York indicted the former head of the U.S. funded and trained Honduran National Police, Juan Carlos “El Tigre” Bonilla Valladares on drug trafficking charges. The indictment directly takes aim at President Juan Orlando Hernandez (JOH) and his brother, Tony Hernandez, the latter awaiting sentencing in a New York prison for large-scale drug trafficking.

The indictment reads: “… on behalf of convicted former Honduran congressman Tony Hernandez and his brother the president, Bonilla Valladares oversaw the transshipment of multi-ton loads of cocaine bound for the U.S., used machineguns and other weaponry to accomplish that, and participated in extreme violence, including the murder of a rival trafficker, to further the conspiracy.”

Despite the serious charges against Bonilla, the mention of JOH in the indictment sparked new hope in Honduras that the head of the “narco-military dictatorship” would one day be charged. However, many in Honduras remain confused about how the clear accusations in the DOJ statement strongly contradict the U.S. government’s consistent support for the JOH’s government. This includes President Donald Trump’s recent mention of “the President of the Republic of Honduras is a really nice guy” in a press conference in the Oval Office less than a week before the DOJ indictment of Bonilla Valladares was made public.

It seems that President Juan Orlando Hernandez has mastered how to remain in the good graces of President Trump by promoting policies of specific interest to Trump. On March 13, two days before the COVID-19 lockdown was implemented, the Honduran government published and therefore, activated the Honduras- U.S. “safe third country” agreement. The agreement is one of Trump’s racist immigration policies that forces asylum seekers in the U.S. to be sent to Honduras and other Central American countries to allegedly seek protection there.

In the midst of a global pandemic, the timing of the agreement’s activation may increase the number of deportations to Honduras. Despite widespread reports of COVID-19 cases in U.S. migrant detention centers, deportations to Central America have not stopped. According to a report recently published by the Center for Economic Policy and Research (CEPR), the U.S. sent 18 deportation flights to Honduras from March 15 (the day the coronavirus lockdown was imposed in Honduras) to April 24.

At least one case of a Honduran woman recently deported from the U.S. suspected of having COVID-19 has been reported by the local press. Upon arriving to Honduras, the woman was arrested in relation to a pending charge, sent to prison in western Copan, and then a few days later, taken to the emergency wing of one of the largest public hospitals with COVID-19 symptoms. To date, there have been no reports of COVID-19 cases in the prison where the woman was held, but her brief, unprotected presence may lead to cases reported in the future.

There are still several weeks of the COVID-19 pandemic crises to unfold in Honduras, particularly since the virus infection rate has not yet peaked. Despite over ten years of active resistance and subsequent repression, Hondurans continue to organize locally, regionally, and nationally to protest the causes of the crises and put forward solutions.

Like in La Travesía, and other Garifuna communities along the coast, Hondurans from all parts of the country are finding ways to protect themselves and gathering together, like in Tegucigalpa, to organize food distribution networks to support the families most in need. These efforts are ways that Hondurans hope to avoid returning to “normal” which according to Miriam Miranda, “would be irresponsible.”

“The pandemic really calls upon us to reflect about how the current ferocious, murderous, capitalist system that kills our environment and natural resources does not work for humanity” says Miranda, “we should not go back to the same as before.”