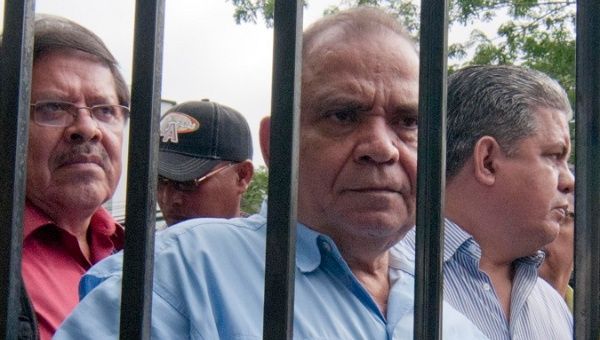 Romero locked himself in a radio studio to avoid a 10 year sentence delivered in response to a corruption scandal he exposed.

Honduran Journalist David Romero Ellner was arrested by police Friday on charges of defamation, libel and slander after the reporter locked himself inside Radio Globo three days ago and continued to broadcast live until his arrest.

Romero barricaded the doors of the radio studio on Monday to avoid a 10 year prison sentence delivered in response to a corruption scandal he exposed incriminating numerous state officials and the government as a whole.

Operatives from the Tigers of the National Preventive Police waited outside the news station before executing the arrest order and taking the reporter into custody.

Romero’s wife, Lidieth Diaz, said police have not told her where her husband is being taken, although she believes he will be moved to an institution in Tamara.

In a report, the Honduran journalist reported numerous irregularities and acts of corruption amounting to over US$3,000 million from the Social Security Institute.

Consequently, Romero was brought to court and sentenced to 10 years and eight months in prison on March 15, 2016 for crimes of libel, slander and defamation, particularly against former Public Prosecutor Sonia Ines Galvez Ferrari.

Despite demands from the Inter-American Commission on Human Rights, the National Commissioner for Human Rights in Honduras (Conadeh), and the Committee to Protect Journalists (CPJ) to drop the charges against the journalist, the Supreme Court only ratified its decision once more in January.

A Honduran-based organization, the Committee for Free Expression, reported there have been 41 similar criminal cases since 2003, 13 of which have been lodged against journalists.

“The mere existence of these crimes and the issuance of sentences with disproportionate sentences also have the effect of intimidation and self-censorship on the free exercise of freedom of expression,” the organization said in January, requesting a decriminalization of these analytical and critical reports, particularly when conducted in the general, public interest.

The CPJ also demanded an end to the antiquated standard of legislation. DElivering a 10 year sentence to a journalist “is based on current archaic laws in Honduras” and is contrary to “international standards.”