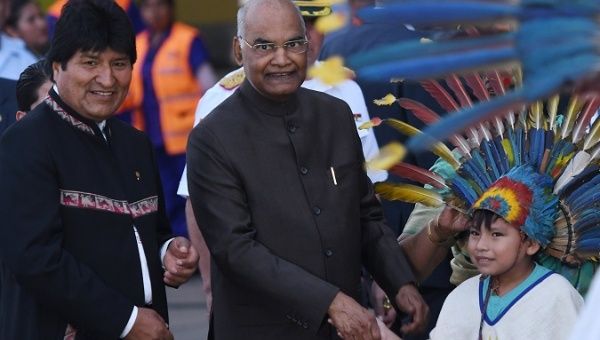 The Andean country adheres to the International Solar Alliance, a multilateral agreement aimed at reducing dependence on fossil fuels.

“I am honored that this is the first India’s State-visit to Bolivia. Today is a historic day in our bilateral relations,” President Kovind said at the Santa Cruz airport and added that “I am very happy to be in Bolivia, a beautiful land which is rich in traditions, diversity, and proud and lovely people.”

With the occasion of the President Kovind’s visit, a businessmen meeting is scheduled, the main goal of which is to promote greater participation of Bolivia with the BRICS, an emerging economic association that includes Brazil, Russia, India, China and South Africa.

Bolivia’s Foreign Trade and Integration Deputy Minister Benjamin Blanco confirmed the participation of businessmen from both countries in about 100 encounters related to mining, the pharmaceutical industry, solar panels, infrastructure, construction, automotive, leather, among others sectors.

“Bolivia’s President Morales:” We are talking to strengthen our health system, for which we will move forward with India to specialize our professionals by promoting technology transfer.”

“We are exporting minerals to India. Exporting food is also possible but we need a bilateral agreement to establish a permanent relationship, Wilfrido Rojo, the president of Bolivia’s National Chamber of Exporters (Caneb), said as reported by Nodal.

The president of the Santa Cruz Chamber of Exporters (Cadex), Osvaldo Barriga, also supported a greater trade integration to India, a country with more than 1,300 million inhabitants.

Gary Rodriguez, the Bolivian Foreign Trade Institute (IBCE) manager, explained that his country can export more than 1,000 products to India, among which are highly nutritious foods such as quinoa, cañahua, tarwi, chia and sesame.

“While Bolivian exports to India reached US$723 million, imports from India were just US$152 million in 2018,” Rodriguez said and commented that the US$571 million trade surplus allows his country to strengthen its international reserves.

“Bolivia plans to build a pharmaceutical industry related to cancer treatments with a credit of US$100 million from India.”

During his visit, President Kovind will be decorated with the Andean Condor National Order in the Grand Collar degree, which is the highest distinction that Bolivia bestows on relevant personalities.

“We will also honor our brother Ram Nath Kovin with the Andean Condor National Order,” President Morales said in a meme and added that “we are proud of your visit. Bolivia is a benchmark in integration and we will continue to build this important bilateral relationship.”

Both countries will also sign cooperation agreements in the fields of traditional medicine, homeopathy systems and information technologies.

At the end of their main working meeting, President Morales and President Kovind also signed a joint declaration through which the Andean country adheres to the International Solar Alliance (ISA), a 122-countries agreement which India initiated in 2015 and whose main goals are to work for efficient use of solar energy and to reduce dependence on fossil fuels.

Currently, the main Bolivian exports to India are commodities such as gold and precious stones. On the other hand, Bolivia usually imports machinery, vehicles and medicines from India.