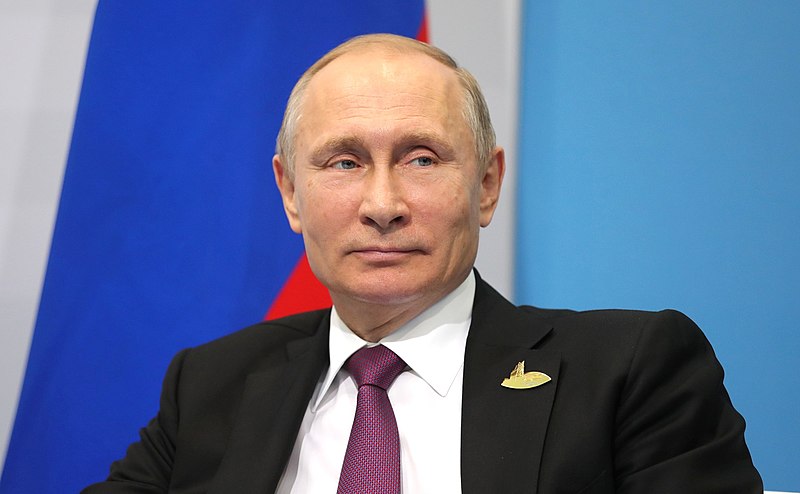 I know how to stop Vladimir Putin once and for all. I here offer my strategic wizardry to the western empire free of charge.

“The Kremlin and Russian state media are aggressively pushing a baseless conspiracy theory blaming the United States for damage to natural gas pipelines in the Baltic Sea in what analysts said Friday is another effort to split the US and its European allies,” AP tells us. “The Russian position is also reverberating on social media forums popular with American conservatives and far-right groups.”

“The suggestion that the US caused the damage was circulating on online forums popular with American conservatives and followers of QAnon, a conspiracy theory movement which asserts that Trump is fighting a battle against a Satanic child-trafficking sect that controls world events,” AP reports.

The Kremlin and Russian state media are aggressively pushing a baseless conspiracy theory blaming the United States for damage to natural gas pipelines in the Baltic Sea in what analysts said is another effort to split the U.S. and its European allies. https://t.co/RVMhH6VdyF

This information may come as a surprise to the many people who are unaware that promoting this claim means they are necessarily either Russian or far-right QAnon Satanic pedophile conspiracy theorists, like for example Poland’s former foreign minister and current sitting member of European Parliament Radek Sikorski, who openly thanked the United States for exploding the pipelines.

The news that this conspiracy theory is “baseless” may also come as a surprise to those who’ve noted that both President Biden and his Under Secretary of State for Political Affairs Victoria Nuland explicitly said that Nord Stream 2 would be brought to an end if Russia invades Ukraine, that the US sanctioned those who built Nord Stream 2, that DC insiders are on record saying they want Europeans to be more dependent on North American energy than on pipelines from Russia, that Germans had just been angrily demanding an end to US-led sanctions on Russia and a reopening of Nord Stream gas, that US naval forces were recently conducting unmanned underwater vehicle drills right where the pipelines were attacked, that unmanned underwater vehicles have been found carrying explosive charges near Russian pipelines in the past, that Poland literally just inaugurated a gas pipeline that will transport gas from Norway through Denmark and the Baltic Sea, that US military helicopters were recorded traveling between the two blast points and along the Nord Stream 2 pipeline shortly before the explosions, that the US empire has an explicitly stated policy of ensuring that no powers develop that could challenge its global hegemony including in Europe, and that the CIA has a known history of blowing up Russian gas pipelines.

But it’s in the news, so it’s definitely true. They’re not allowed to lie. The US is not guilty.

New on MoA:
Whodunnit? – Facts Related to The Sabotage Attack On The Nord Stream Pipelineshttps://t.co/953dMtqg1X pic.twitter.com/xpNiC3I3wk

So if it’s a crazy Russian-Satan-pedophile-QAnon crackpot conspiracy theory to believe the US government or its imperial proxies may have had something to do with the sabotage of Russian pipelines, who did it?

Well, this is going to blow your mind because of how wildly counter-intuitive it is, but here’s the answer: Russia.

This is according to such ever-impartial and totally trustworthy experts as former CIA director John Brennan, who says that “Russia certainly is the most likely suspect,” and NATO think tanker Alexander Vershbow, who says Putin blew up his own pipelines instead of simply closing a valve because he wanted to show the world that he is a “madman.”

The Great Game in Ukraine is Spinning Out of Control

“The sabotage of the Nord Stream pipelines further reinforces the image of Putin as madman, which might persuade some allies to push for a ceasefire and negotiations that would inevitably mean Ukraine giving up significant amounts of territory,” Vershbow told The Atlantic’s Susan B Glaser.

So there you have it. Russia, not the US empire, is responsible for destroying billions of dollars of its own economic and energy infrastructure and releasing hundreds of millions of dollars of its own gas and ending its crucial point of leverage over Europe in direct facilitation of US geostrategic interests and in direct subversion of its own, because Putin is a crazy lunatic. If it wasn’t true, they couldn’t report it in the news.

So are you ready for my brilliant strategy on how to defeat Putin? Here it is: simply stand back and wait for him to explode the rest of Russia.

This is after all the same madman who the New York Times informs us has been ordering his troops to shell a nuclear power plant they already control. If Putin is a gibbering, irrational lunatic who enjoys blowing up his own stuff for no reason other than to act crazy, surely if we just stand back and leave him to his own devices he will soon turn the Russian Federation into a steaming pile of rubble.

According to NYT's @SangerNYT and @jimtankersley, the shelling of Ukraine’s Zaporizhzhia nuclear power plant has been carried out "apparently by Russian forces." Which would mean that Russia is shelling a nuclear plant that it's also occupying. https://t.co/wsh9DCy6Pg pic.twitter.com/t9zXuoMhOb

Honestly I can’t believe it’s taken me, a humble blogger, to figure this out on behalf of the US empire. You’d think with all the brilliant minds in the US government and the mainstream news media they’d have figured this one out by themselves, but apparently they need a little help sometimes. Any DC think tanks are welcome to call me for any lucrative employment offers they care to extend.

You are welcome in advance. Here’s looking forward to Putin’s self-inflicted downfall.