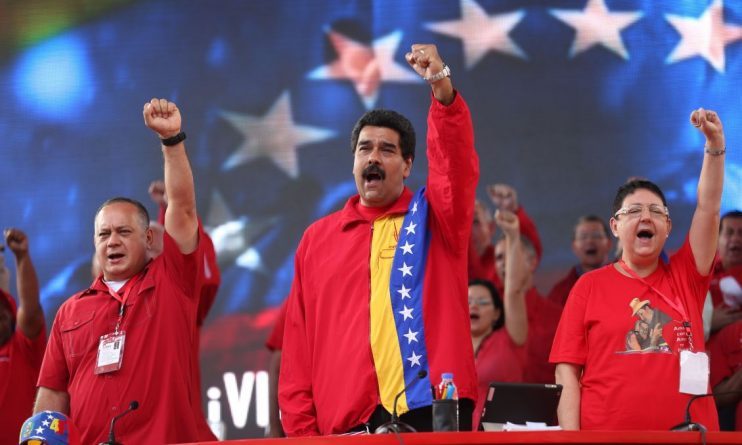 Recently, Latino Rebels published an article titled, “I’m Venezuelan, I’m a Progressive and I Want to See Maduro Go” by Pilar Marrero. In her article, Marrero says she is a Venezuela-born progressive who lives in the U.S. and is concerned about the situation in the South American country. She says she understands the history of U.S. military intervention in Latin America, meaning she is not “naive about it in the long shot.” Rather, she is a “progressive” who recognizes the bloody history of U.S. intervention in Latin America.

In addition, she brings up the three million Venezuelans who have left the country due to the situation inside the country. She believes there is a “pro-democracy push that came from within Venezuela in the unity of the opposition’s many parties around transition President Juan Guaidó.” Finally, Marrero concludes that Trump’s administration “is on the right side of the issue at this point, so far, even if it is for the wrong reasons.”

Immediately, Marrero’s conclusion left me wondering if we had the same Trump administration in mind. The administration I have in mind is the one that separates migrant children from their parents; harbors and protects sexual predators, rapists and homophobes; condones white supremacist attacks; and explicitly attacks immigrants and Latinxs with prejudiced rhetoric. Apparently, this guy is “on the right side of the issue” and is promoting democracy. This, even though his National Security Adviser, John Bolton, admitted that the United States is just interested in controlling Venezuelan oil.

She regurgitates lies about Maduro from Elliot Abrams, who aided right-wing terrorists in Central America in the 1980s. She claims to know so much about U.S. intervention, especially at that time and place, but then turns around and agrees with some of its worst human rights abusers.

Top on the list of imperialist propaganda perpetuated by Marrero is the decontextualization of the refugee crisis. Marrero points out that 3.4 million Venezuelans are migrants and refugees, failing to mention neighboring Colombia’s 5 million internally displaced refugees. This number is far greater than the number of Venezuelan refugees, but you won’t see the United States invade Colombia over this humanitarian crisis. Instead, they work with the right-wing government, whose neoliberal economic policies and acts of violence have displaced millions, in order to stage an invasion against a sovereign state.

We need to also ask ourselves why people would leave a nation transitioning from capitalism to socialism. One reason is that the Bolivarian Revolution threatens their socio-economic status through the redistribution of wealth, very similar to how the Cuban Revolution threatened the status of the gusanos who fled. But the background of these refugees is rarely questioned by mainstream media.

In addition, severe economic sanctions by the United States drives down their purchasing power down. This means people can’t afford to buy the goods they need to survive. Corporate greed led to individuals withholding goods like food and inflating prices to make buying goods difficult. The problem in Venezuela is not scarcity, but an inability for people to afford the necessary goods — a problem that the capitalists intentionally created to delegitimize Maduro.

Marrero emphasizes other imperialist talking points, such as Maduro being the cause of economic failure and Venezuela being an illegitimate democracy. Yet she fails to mention that U.S. economic sanctions have cost Venezuela over $30 billion. Does she not understand that this is underdevelopment in action? How could any Venezuelan policy be successful when the nation must first compensate for billions of dollars in losses?

After former President Hugo Chávez took power and the Bolivarian Revolution began, Venezuelan society has undergone a positive transformation. Universal education was established. Social programs for the poor were organized. Women, Black, Indigenous, and LGBTQ people — and people with disabilities — were incorporated into the country’s political process. Thousands of medical clinics were built. Hundreds of thousands of grassroots collectives were established. Millions of affordable homes were built. PetroCaribe was established to aid Caribbean nations. The list of progressive policies implemented by the Bolivarian Revolution, despite imperialist threats, goes on.

In regards to Venezuela’s democratic system, it’s important to note that even former U.S. President Jimmy Carter admitted Venezuela’s electoral system was the “best in the world.” As many people have pointed out, Venezuela is a democratic nation with a more secure democratic process than the United States, a process that involves fingerprint ID and a separate government Electoral Branch, whose job it is to ensure objective and fair elections. In the last of these fair and secure elections, Maduro won over 60 percent of the vote.

Moreover, Maduro is recognized by 141 countries, or about 75 percent of the world, while Guaidó is recognized by 48 countries, about 25 percent of the world. Ask yourself, “Who is representing the masses and who is representing the elite?” And when Marrero claims Maduro is illegitimate and not democratic, also ask yourself, “Who is she defending? The masses who stand in solidarity with Maduro or the imperialist elite who push for Guaidó?”

A look at the Venezuelan opposition’s “pro-democracy push” tells all. At the recent conflict on the Venezuelan-Colombian border on Feb. 23, video, photo and eyewitness accounts all demonstrated that the far-right protesters instigated violence on the border. It was the opposition protesters who burned the aid trucks, confessed to being hired and hid kits full of nails, masks, barbed wire and other protest essentials in the “humanitarian” trucks they tried to get across the border.

In the past, the opposition has been implicated in election fraud, refused to take part in the election process in the country and orchestrated violent guarimbas, where opposition protesters would burn Chavistas alive and kill them. However, for Marrero, these are the people who are fighting for democracy in Venezuela, a nation with an already outstanding democratic process.

Some pictures captured by VA’s on the ground team during yesterday’s anti-imperialist march in Caracas pic.twitter.com/74KFFkQ8Cg

Imperialism is not just U.S. military action, but also involves the spreading of imperialist lies demonizing our people in the Global South, staged crises, genocidal sanctions, economic super-exploitation, blockades and the funding of right-wing groups to terrorize our people. Both “progressive” and conservative U.S. politicians support one or more of these policies in the U.S. crusade against Venezuela.

Don’t be like Marrero. Don’t use your identity to justify regurgitating imperialist propaganda to our communities being destroyed by those same elites. Let us educate ourselves and our people to not become defenders of the imperialism that has destroyed and murdered our families in Latin America and the Caribbean.