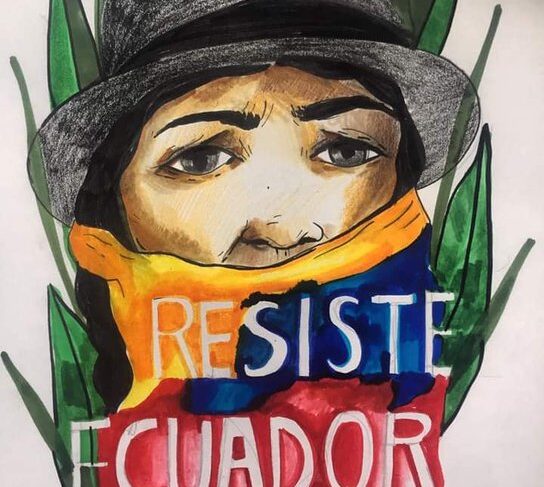 Drawing of indigenous woman with her mouth strapped with an Ecuadorian flag. File photo.

By Network of Intellectuals and Artists in Defense of Humanity – Jun 24, 2022

The Ecuadorian people, with the Indigenous and peasant movement at the forefront, have taken to the streets to express their resistance to the adverse impacts of the extreme neoliberal policies implemented by the government of banker Guillermo Lasso. The peaceful nationwide mobilization is demanding a response from the government to critical issues that affect the people in their daily lives, such as the lack of employment and labor rights, a moratorium and renegotiation of personal and family debts, fair prices for peasant production, control of basic prices and an end to speculation, control of fuel prices, respect for collective rights, no privatization of strategic sectors and public patrimony, funds for healthcare, limits to mining and oil extraction, education for all, and effective security and protection policies.

The government has responded with an aggressive intervention by the police and the army, and with the declaration of a state of emergency in several provinces, which has resulted in five people dead, more than a hundred injured, and other violations of human and constitutional rights. Moreover, in the face of the perseverance of the popular mobilization, Lasso has threatened even greater repression and the use of lethal ammunition. This, in the context of a state of emergency, threatens the most basic Constitutional rights, such as the right to assembly, association, free transit, and even freedom of expression.

The Network of Intellectuals and Artists in Defense of Humanity expresses its support for the Ecuadorian people, their basic demands, and their Constitutional right to resistance. At the same time, it urges the government of the president, Guillermo Lasso, to:

• Repeal the state of exception, demilitarize the country and re-establish democratic institutionality.
•  Respect the human and political rights of citizens, and end intimidating, racist, and discriminatory actions contrary to the Ecuadorian Constitution.
•  Analyze and provide a prompt response to the 10-point agenda presented by the Indigenous, peasants, women, students and other organizations, which includes essential aspects for the life of the citizenry, which are framed along the lines of basic human rights.

Lasso and his government should base their actions on the Constitutional framework and respect the initiatives that are expressed in the other functions of the state, as is the case of the National Assembly, where proposals are being put forward to find a way out of the serious internal disturbance that the country is experiencing, including ways to resolve the situation with votes and not with bullets.

The Network of Intellectuals and Artists in Defense of Humanity reiterates its solidarity with the Ecuadorian people, with the Indigenous peoples and nationalities, with the popular, peasant, youth, and women’s movements, in the hope of overcoming soon all forms of authoritarianism and retaking, through Constitutional means, the management of their own destiny.