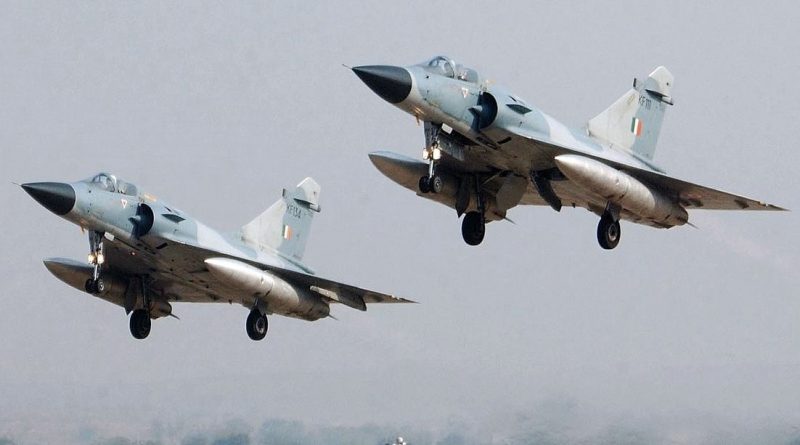 Indian Foreign Secretary Vijay Gokhale, however, asserted that the jets had hit their target, and that “a very large number of JeM terrorists, trainers, senior commanders and groups of jihadis who were being trained for fidayeen action were eliminated”.

“The government of India is firmly and resolutely committed to taking all necessary measures to fight the menace of terrorism,” he told reporters in New Delhi. “Hence this non-military pre-emptive action was specifically targeted at the Jaish-e-Mohammed camp.”

C Uday Bhaskar, the director of the Society for Policy Studies based in New Delhi, said: “India has sent a very firm signal.”

“The fact that air power has been used for the first time against a terrorist target to my mind signalled to Pakistan that India is demonstrating resolve in terms of using military power, particularly air power,” he said.

Indian Prime Minister Narendra Modi held a meeting with his top government officials in New Delhi where he was briefed about the predawn air attack.

Hours later, speaking at an election rally in the western state of Rajasthan, Modi said “the country is in safe hands”, avoiding direct reference to the air raids.

“I pledge on this soil … I will not let the country bend.”

Al Jazeera’s Faiz Jamil, reporting from New Delhi, said that the Indian government has been under a lot of pressure to act in the wake of the Kashmir attack.

“This attack was expected and one of the reasons it was delayed was the visit of the Saudi Crown Prince Mohammed bin Salman to the region,” Jamil said.

“But everyone did expect that this would somehow happen sometime soon, especially with [general] elections coming up in April.”

‘Uncalled-for aggression’
A special meeting of the National Security Committee chaired by the Prime Minister Imran Khan was held at his office on Tuesday.

The meeting was attended by the ministers of foreign affairs, defence and finance, the chairman joint chiefs of staff committee and other civil and military officials.

“Forum strongly rejected Indian claim of targeting an alleged terrorist camp near Balakot and the claim of heavy casualties. Once again, Indian government has resorted to a self-serving, reckless and fictitious claim,” the prime minister’s office said in a statement.

“Forum concluded that India has committed uncalled for aggression to which Pakistan shall respond at the time and place of its choosing.”

Hassan Akbar, director at the Islamabad-based Jinnah Institute think-tank, termed the attacks “a very provocative and aggressive action by India”.

“They did drop payload in various sectors including in Khyber Pakhtunkhwa province, and this constitutes a serious violation of Pakistan’s airspace and sovereignty.”

Akbar said Pakistan’s response could range from hitting Indian artillery positions along the Line of Control to taking “a more escalatory position” and launching similar airstrikes on Indian military targets.

Sounds of aircraft
Local residents and journalists in Pakistan told Al Jazeera that the sounds of aircraft and an explosion were heard in the Jaba area of Mansehra district, located about 60km from the LoC – the de facto border that divides Indian- and Pakistan-administered Kashmir.

India and Pakistan have fought three of their four wars over Kashmir, which both claim in full but administer separate portions of.

The air attacks on Tuesday appear to have taken place outside of Kashmir, at least 10km inside the Pakistani province of Khyber Pakhtunkhwa.

Pakistan’s military did not confirm the location of the incident, offering conflicting reports that at first placed it near the town of Balakot, about 12km from Jaba, and later claimed it occurred within the confines of Pakistan-administered Kashmir.

Tensions between the South Asian neighbours have been high since February 14, when a suicide attacker killed at least 42 Indian security personnel in the Indian-administered Kashmir town of Pulwama.

Raids in Kashmir
Meanwhile, Indian security forces have conducted raids on the houses of four senior Kashmiri separatist leaders, including chief of the Jammu and Kashmir Liberation Front Yasin Malik.

“The cost of war might not be known in the TV studios, but we have already borne the brunt of the long conflict. Now, it seems the only option left for us is quick devastation or slow devastation,” said 65-year-old Bashir Ahmad Pal, a resident of Baramulla, a frontier town in northern Indian-administered Kashmir.

The joint group of separatist leaders have called for a two-day shutdown in Kashmir from February 27 to protest against the raids and “spree of arrests”.

India has threatened Pakistan with military action repeatedly since the February 14 blast, blaming it for “controlling” the attack. Pakistan-based armed group JeM had claimed the attack.

Pakistan denies any role in the attack, and last week Pakistani Prime Minister Imran Khan asked India for “actionable intelligence” in order to take action against any JeM operatives in Pakistan.

Pakistan has dubbed it an act of aggression.

Pakistani Foreign Minister Shah Mehmood Qureshi, speaking after the National Security Committee meeting, told reporters that the Indian incursion into Pakistani airspace lasted three minutes, beginning at 2.55am local time. He said that the aircraft remained near the LoC, and did not enter airspace outside of Kashmir.

“They left from near the LoC, because of our alertness and the alertness of the Pakistan Air force,” he said.

“Escalation is not our aim, nor will it be. We have always spoken of de-esclation and defusion. And repulsing aggression is our right,” he said.

Earlier Qureshi said Pakistan reserved “the right to a reasonable response and the right to self-defence”.