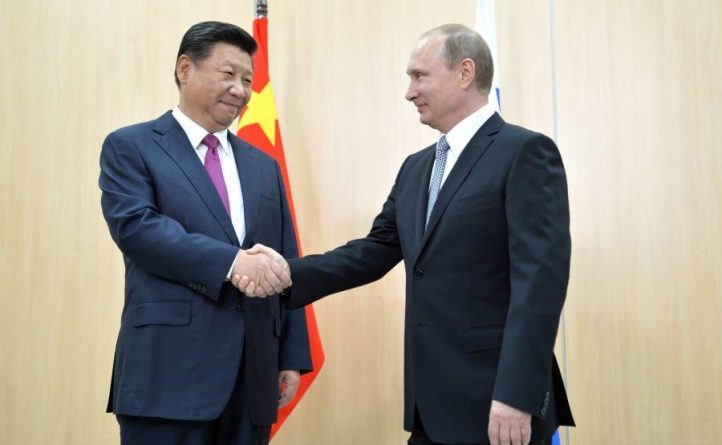 Fortunately the world today is very different from that of 2003, Washington’s decrees are less effective in determining the world order. But in spite of this new, more balanced division of power amongst several powers, Washington appears ever more aggressive towards allies and enemies alike, regardless of which US president is in office.
China and Russia are leading this historic transition while being careful to avoid direct war with the United States. To succeed in this endeavor, they use a hybrid strategy involving diplomacy, military support to allies, and economic guarantees to countries under Washington’s attack.

The United States considers the whole planet its playground. Its military and political doctrine is based on the concept of liberal hegemony, as explained by political scientist John Mearsheimer. This imperialistic attitude has, over time, created a coordinated and semi-official front of countries resisting this liberal hegemony. The recent events in Venezuela indicate why cooperation between these counter-hegemonic countries is essential to accelerating the transition from a unipolar to a multipolar reality, where the damage US imperialism is able to bring about is diminished.

Moscow and Beijing lead the world by hindering Washington
Moscow and Beijing, following a complex relationship from the period of the Cold War, have managed to achieve a confluence of interests in their grand objectives over the coming years. The understanding they have come to mainly revolves around stemming the chaos Washington has unleashed on the world.

The guiding principle of the US military-intelligence apparatus is that if a country cannot be controlled (such as Iraq following the 2003 invasion), then it has to be destroyed in order to save it from falling into Sino-Russian camp. This is what the United States has attempted to do with Syria, and what it intends to do with Venezuela.

The Middle East is an area that has drawn global attention for some time, with Washington clearly interested in supporting its Israeli and Saudi allies in the region. Israel pursues a foreign policy aimed at dismantling the Iranian and Syrian states. Saudi Arabia also pursues a similar strategy against Iran and Syria, in addition to fueling a rift within the Arab world stemming from its differences with Qatar.

The foreign-policy decisions of Israel and Saudi Arabia have been supported by Washington for decades, for two very specific reasons: the influence of the Israel lobby in the US, and the need to ensure that Saudi Arabia and the OPEC countries sell oil in US dollars, thereby preserving the role of the US dollar as the global reserve currency.

The US dollar remaining the global reserve currency is essential to Washington being able to maintain her role as superpower and is crucial to her hybrid strategy against her geopolitical rivals. Sanctions are a good example of how Washington uses the global financial and economic system, based on the US dollar, as a weapon against her enemies. In the case of the Middle East, Iran is the main target, with sanctions aimed at preventing the Islamic Republic from trading on foreign banking systems. Washington has vetoed Syria’s ability to procure contracts to reconstruct the country, with European companies being threatened that they risk no longer being able to work in the US if they accept to work in Syria.

Beijing and Moscow have a clear diplomatic strategy, jointly rejecting countless motions advanced by the US, the UK and France at the United Nations Security Council condemning Iran and Syria. On the military front, Russia continues her presence in Syria. China’s economic efforts, although not yet fully visible in Syria and Iran, will be the essential part of reviving these countries destroyed by years of war inflicted by Washington and her allies.

China and Russia’s containment strategy in the Middle East aims to defend Syria and Iran diplomatically using international law, something that is continuously ridden roughshod over by the US and her regional allies. Russia’s military action has been crucial to curbing and defeating the inhuman aggression launched against Syria, and has also drawn a red line that Israel cannot cross in its efforts to attack Iran. The defeat of the United States in Syria has created an encouraging precedent for the rest of the world. Washington has been forced to abandon the original plans to getting rid of Assad.

Syria will be remembered in the future as the beginning of the multipolar revolution, whereby the United States was contained in military-conventional terms as a result of the coordinated actions of China and Russia.

China’s economic contribution provides for such urgent needs as the supply of food, government loans, and medicines to countries under Washington’s economic siege. So long as the global financial system remains anchored to the US dollar, Washington remains able to cause a lot of pain to countries refusing to obey her diktats.

The effectiveness of economic sanctions varies from country to country. The Russian Federation used sanctions imposed by the West as an impetus to obtain a complete, or almost autonomous, refinancing of its main foreign debt, as well as to producing at home what had previously been imported from abroad. Russia’s long-term strategy is to open up to China and other Asian countries as the main market for imports and exports, reducing contacts with the Europeans if countries like France and Germany continue in their hostility towards the Russian Federation.

Thanks to Chinese investments, together with planned projects like the Belt and Road Initiative (BRI), the hegemony of the US dollar is under threat in the medium to long term. The Chinese initiatives in the fields of infrastructure, energy, rail, road and technology connections among dozens of countries, added to the continuing need for oil, will drive ever-increasing consumption of oil in Asia that is currently paid for in US dollars.

Moscow is in a privileged position, enjoying good relations with all the major producers of oil and LNG, from Qatar to Saudi Arabia, and including Iran, Venezuela and Nigeria. Moscow’s good relations with Riyadh are ultimately aimed at the creation of an OPEC+ arrangement that includes Russia.

Particular attention should be given to the situation in Venezuela, one of the most important countries in OPEC. Riyadh sent to Caracas in recent weeks a tanker carrying two million barrels of oil, and Mohammed bin Salman (MBS) has taken a neutral stance regarding Venezuela, maintaining a predictable balance between Washington and Caracas.

These joint initiatives, led by Moscow and Beijing, are aimed at reducing the use of the US dollar by countries that are involved in the BRI and adhere to the OPEC+ format. This diversification away from the US dollar, to cover financial transactions between countries involving investment, oil and LNG, will see the progressive abandonment of the US dollar as a result of agreements that increasingly do away with the dollar.

For the moment, Riyadh does not seem intent on losing US military protection. But recent events to do with Khashoggi, as well as the failure to list Saudi Aramco on the New York or London stock exchanges, have severely undermined the confidence of the Saudi royal family in her American allies. The meeting between Putin and MBS at the G20 in Bueno Aires seemed to signal a clear message to Washington as well as the future of the US dollar.

Moscow and Beijing’s military, economic and diplomatic efforts see their culmination in the Astana process. Turkey is one of the principal countries behind the aggression against Syria; but Moscow and Tehran have incorporated it into the process of containing the regional chaos spawned by the United States. Thanks to timely agreements in Syria known as “deconfliction zones”, Damascus has advanced, city by city, to clear the country of the terrorists financed by Washington, Riyadh and Ankara.

Qatar, an economic guarantor of Turkey, which in return offers military protection to Doha, is also moving away from the Israeli-Saudi camp as a result of Sino-Russian efforts in the energy, diplomatic and military fields. Doha’s move has also been because of the fratricidal diplomatic-economic war launched by Riyadh against Doha, being yet another example of the contagious effect of the chaos created by Washington, especially on US allies Israel and Saudi Arabia.

Washington loses military influence in the region thanks to the presence of Moscow, and this leads traditional US allies like Turkey and Qatar to gravitate towards a field composed essentially of the countries opposed to Washington.

Washington’s military and diplomatic defeat in the region will, in the long run, make it possible to change the economic structure of the Middle East. A multipolar reality will prevail, where regional powers like Egypt, Turkey, Saudi Arabia and Iran will feel compelled to interact economically with the whole Eurasian continent as part of the Belt and Road Initiative.

The basic principle for Moscow and Beijing is the use of military, economic and diplomatic means to contain the United States in its unceasing drive to kill, steal and destroy.