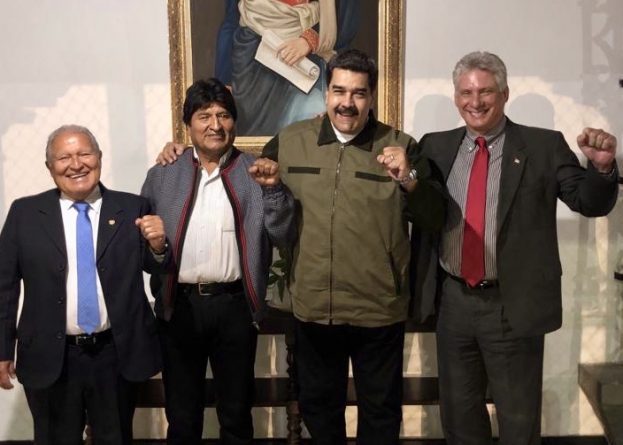 This Wednesday, the international delegations that will participate in the inauguration of President Nicolás Maduro, who will assume his second term (2019-2025), began arriving in Caracas. At the Maiquetía International Airport, representatives of the Venezuelan Government received the Presidents of El Salvador, Salvador Sánchez Cerén; from Bolivia, Evo Morales; from Cuba, Miguel Díaz Canel; and South Ossetia, Anatoli Bibilov. On the night of this Wednesday, the Venezuelan Foreign Minister, Jorge Arreaza, also received the Vice President of the Republic of Turkey, Fuat Oktay, and the delegations of Saint Kitts and Nevis; and Antigua and Barbuda.

The ambassador of the permanent mission of the League of Arab States, in Brazil, Qais Shqair, also arrived in the South American country; and the ambassador of Mozambique in Cuba, Eliseu Joaquim Machava, informed AVN.

The President of Nicaragua, Daniel Ortega, arrived in Venezuela on Thursday to accompany the Venezuelan leader in the inauguration of his second term. Upon his arrival in Venezuela, Daniel Ortega said he was honored to be in the free homeland of Simón Bolívar, of Hugo Chávez and of a heroic people fighting a battle for peace and justice in the region.

The president of the Workers’ Party (PT) of Brazil, Gleisi Hoffmann, indicated that she will be with the other heads of state and leaders of the world for the act to be held at the TSJ on Thursday.

The Government of China was also present through its Minister of Agriculture, Han Changfu, special envoy commanded by President Xi Jinping.

The Uruguayan Foreign Minister, Rodolfo Nin Novoa, informed on Tuesday that his Government will send a representation of his country for the inauguration of President Maduro, which will be headed by the charge d’affaires in Venezuela, José Luis Remedi.

Also, the Ministry of Foreign Affairs of Mexico notified that its charge d’affaires at the Embassy of his country in the South American nation, Juan Manuel Nungaray, will represent the Government of Andrés Manuel López Obrador at the ceremony.

On Tuesday, the Secretary General of the Organization of Petroleum Exporting Countries (OPEC), Mohammed Sanussi Barkindo, arrived in the Latin American country. He also plans to attend the protocol events.

The international delegations arrived in the midst of a controversial presidential inauguration, an act that will not be recognized by 13 countries in Latin America (Argentina, Brazil, Canada, Chile, Colombia, Costa Rica, Guatemala, Guyana, Honduras, Panama, Paraguay, Peru and Saint Lucia), gathered in the Lima Group.

President Maduro set a deadline of 48 hours, starting this Wednesday, for these nations to “rectify” their interventionist position. Otherwise, Venezuela will adopt the “most crude and energetic measures that a government can take in defense of dignity, sovereignty and integrity,” the president said.