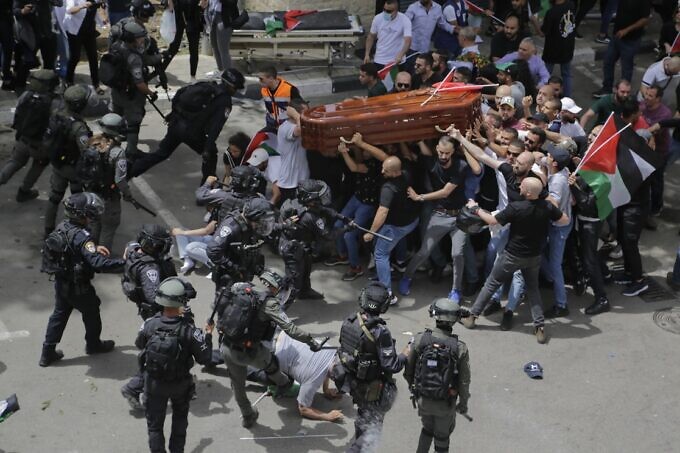 Videos on television and social media showed Abu Akleh’s coffin nearly falling to the ground as Israeli police attacked the mourners carrying it, in Jerusalem.

At least four people were arrested during the Israeli assault. Among them are two men who were arrested for raising the Palestinian flag.

Israeli police also broke a window of the hearse to grab a Palestinian flag that was in the back of the car.

On Thursday, May 12, Palestinians took to the streets in several cities to pay a farewell tribute to Shireen Abu Akleh, who was killed by Israeli forces in the West Bank city of Jenin, on Wednesday, May 11. The mourners chanted slogans against Israeli occupation and demanded justice before a coffin covered with the Palestinian flag and the traditional press vest.

"The Israeli army is asking people if they are Christian or Muslim. If you’re Muslim you weren’t allowed in." – @ajimran

A war crime
The United Nations condemned the murder of the Palestinian journalist and demanded an immediate investigation to ensure that those responsible would not go unpunished.

The United Nations envoy for the Middle East, Tor Wennesland, stressed that “media workers should never be attacked,” and conveyed his condolences to the reporter’s family, wishing a speedy recovery for another journalist, Ali Samoudi of Jerusalem-based Quds News Network, who was with Abu Akleh that day and was also injured.

Wennesland expressed strong condemnation of the murder and called for “an immediate and exhaustive investigation” so that “those responsible are held accountable.”

Israeli Army claimed that from its preliminary investigations, “it is not possible to unequivocally determine the origin of the shot” that killed Abu Akleh.

The Israeli investigation considered “two possibilities” about the source of the lethal bullet: armed Palestinians, “who fired hundreds of bullets from various places,” or an Israeli soldier returning fire at a Palestinian militiaman allegedly close to Akleh.

This morning, B’Tselem’s field researcher in Jenin documented the exact locations in which the Palestinian gunman depicted in a video distributed by the Israeli army, fired, as well as the exact location in which Journalist Shireen Abu Akleh was killed. pic.twitter.com/6VbEJJuF7z

However, the Israeli claims have been discarded by the journalists who were accompanying Abu Akleh, who stress that she was fired by an Israeli armed security personnel from close range. Israeli human rights group B’Tselem has also contested the Israeli “investigation,” and released their own investigation documenting the location of the alleged Palestinian gunmen and the spot where the journalist was shot fatally.