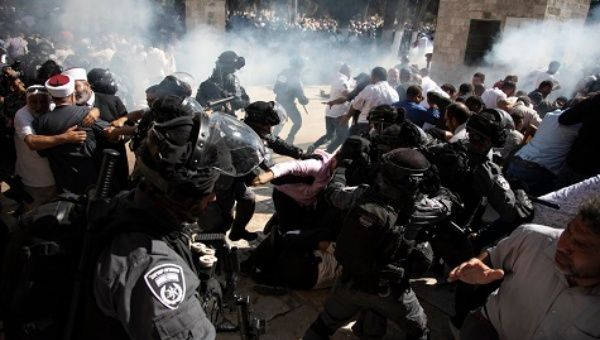 61 Palestinians were wounded with 15 taken to hospitals after Israeli forces fired tear gas and rubber bullets on them.

Israeli forces used rubber bullets and tear gas against Muslim worshippers Sunday on the first day of the Eid al-Adha holiday, as the latter refused the entry into the holy site of Al-Aqsa compound in Jerusalem, to some 450 Israeli settlers.

61 Palestinians were wounded with 15 taken to hospitals according to the Red Crescent, while Israel’s Kan public radio reported that four police officers were injured.

The Muslim celebration which commemorates God’s testing of Abraham’s faith by commanding him to sacrifice his son, co-occurs with the Jewish holiday of Tisha B’av when Jewish demand to enter the compound to mourn the destruction of a temple believed to have been located there 2,000 years ago.

While Palestinians had called on Muslims to celebrate the holiday in Al-Aqsa, Jewish groups on their part had also announced they would assemble in it.

Still, and in an attempt to ease the tensions, Jerusalem District Police had said they would bar non-Muslims from visiting the site on Sunday, but they ultimately lifted the ban and allowed hundreds of Israeli settlers in.

It is not clear why the authorities decided to remove the ban at the last moment, but some sources told Middle East Eye that settler groups have been pressuring them to do so.

“With our soul and blood we will redeem you, Aqsa,” chanted the hundreds of Palestinians that had protested outside one of the gates to stop the settlers from entering.

Fights followed and the police intervened with tear gas and rubber bullets against the demonstrators.

“It’s our mosque, it’s our Eid,” said Assisa Abu Sneineh a Palestinian woman who was there when the scuffles started, adding that “all of a sudden security forces arrived and began to hit and fire sound grenades.”

“The storming of al-Aqsa mosque compound by Israeli occupation forces this Eid morning is an act of recklessness and aggression,” she said in a statement.

Considered the third-holiest site in Islam, as Muslims believe the Prophet Mohammed ascended to heaven from there, the Al-Aqsa compound is one of the most sensitive issues in the Israeli-Palestinian conflict.

Since the occupation of East Jerusalem in 1967, Israelis have been praying at the Western Wall, a remnant from the Second Temple, which is considered the holiest site in Judaism. Jews can visit the site during set hours but not to pray there to avoid frictions.

However, Israeli settlers who systematically enter the compound often pray on the site.