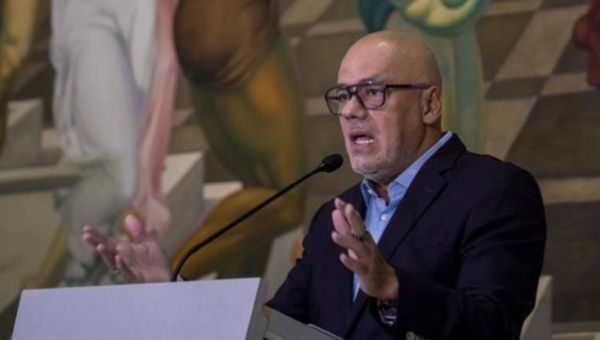 On Friday, March 18, the president of the National Assembly (AN) of Venezuela, Jorge Rodríguez, presented new evidence about the links of former deputy Juan Guaidó and his Voluntad Popular (VP) party with Colombian drug trafficking.

At a press conference, Rodríguez showed evidence of Guaidó’s links with Italian-Venezuelan drug trafficker Biagio Benito Garofalo Forte, who was arrested this March 14 in Colombia. The drug trafficker had an Interpol red alert against him in more than 190 countries.

In 2016, Guaidó had appointed Garofalo Forte as the municipal head of VP in Anaco, Anzoátegui state.

Rodríguez also mentioned that Garofalo acted as a liaison between the United States “ambassador” to Venezuela, James Story, and Juan Guaidó. He was VP’s main financier too.

Deputy Rodríguez, who is also the president of the Commission for Dialogue, Peace and National Reconciliation, showed chats that confirmed the relation of former deputy Marco Aurelio Quiñones with drug trafficker Garofalo.

In the chats of former deputy Quiñones (one of Guaidó’s right-hand man) with the ex-parliamentarian Franco Casella, his concern about the evidence that Garofalo could present is evident.

Rodríguez also showed a photo in which Garofalo appears together with the mayor of Lechería, Manuel Ferreira González, and the director of Guaidó’s alleged office, Luis Somaza.

Another piece of evidence was a video recorded in 2019, at a private party at Garofalo’s house in the Las Tinajas Country Club housing complex, where Juan Guaidó was present along with some other opposition leaders.

“In January 2019,” Rodríguez stated, “a party was held in Anaco, where Juan Guaidó, Marco Aurelio Quiñones, Carlos Paparoni and Barreto Sira were present.”

All these photos, videos and messages constitute undeniable evidence of Guaidó’s links with narco-trafficking, according to Rodríguez.