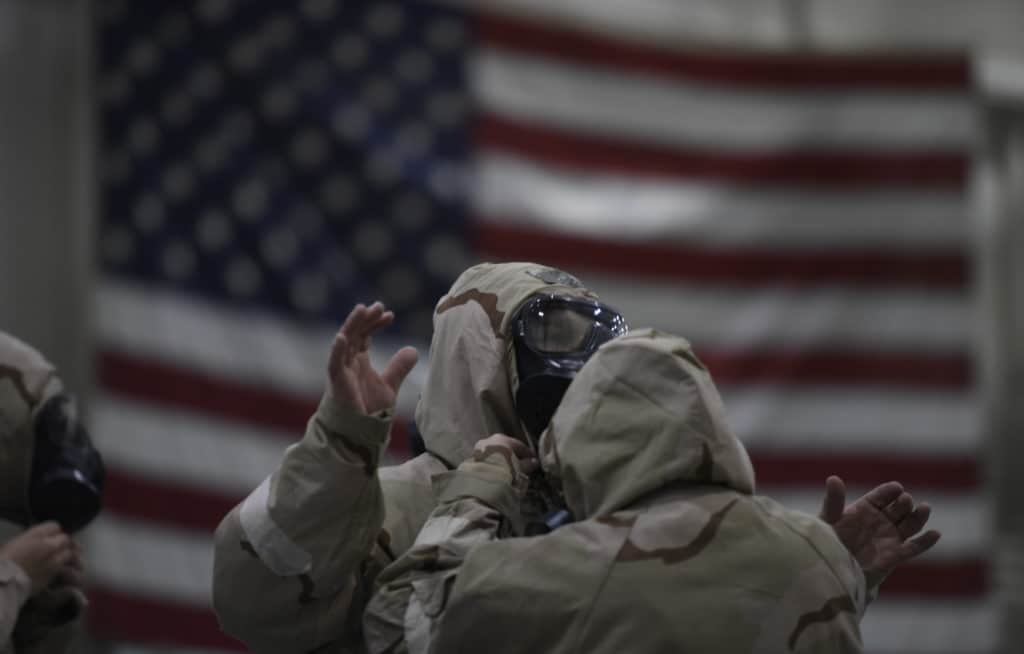 US military personnel dressing with bio hazzard gear and the US flag in the background. Photo: Twitter / @amcchinetchad.

Leftist Colombian senator, Iván Cepeda, sent a letter to President Iván Duque to request clarification on whether or not the South American nation will store nuclear and biological weapons from the United States.

The request was made after several local media outlets reported that US President Joe Biden had announced his intention to designate Colombia as a non-NATO member ally, and after Ivan Duque himself confirmed that Colombia will become a US strategic military ally which could store US equipment in Colombian territory that might be of use in high-risk situations.

Cepeda posted an image of his letter to Duque on Twitter and commented that, “exercising my right of petition, yesterday, I formally requested that President Duque report on if he has committed to Colombia storing nuclear or biological weapons from the United States.”

According to the Colombian senator, the Senate is a body the president should consult with in order to study matters related to international politics, diplomatic negotiations, and the signing of public treaties, among others things.

Likewise, Cepeda, taking into consideration the context of the Russia-Ukraine military conflict, asked Duque to report on what measures the nation would adopt in order to guarantee that the storage of US equipment on its territory would not become a threat to Colombia and Colombian sovereignty.

In the past few days, with Russia’s military deployment in Ukraine, Russian officials have been reporting on labs financed by the US where biological weapons might have been developed to attack the Russian population. Initially US authorities denied these claims, but ultimately acknowledged that they had indeed financed these projects and that they were “aware” of Ukrainian attempts to destroy evidence of their work in biological laboratories.

As these events continue to unfold, Colombia remains a key pawn in Washington’s attempt to oust Venezuelan president Nicolas Maduro. From Colombian territory, mercenary incursions have been launched into Venezuela and recently the Colombian government announced the culmination of navy exercises in Colombian Caribbean waters, near Venezuelan territorial waters, with the participation of a US nuclear submarine, the USS Minnesota.

Featured image: US military personnel dressed with bio-hazard gear and the US flag in the background. Photo: Twitter / @amcchinetchad.