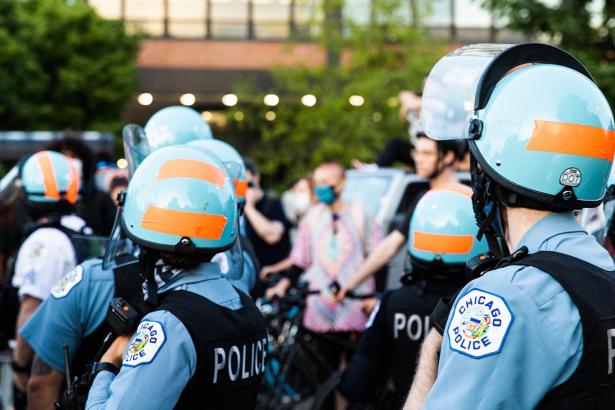 Several local unions have moved to oust police unions, despite the federation’s approach that collective bargaining can be used for police reform.

The nation’s labor movement is splitting over police reform in the wake of George Floyd’s death.

Local unions are defying leaders of the AFL-CIO, who have rejected calls to cut ties with the labor federation’s law enforcement arm and stressed the importance of collective bargaining instead to counter the use of excessive force. Several local unions, including those affiliated with the AFL-CIO, have moved to oust police unions within their locals and remove officers from schools and other workplaces. They argue that police have used their bargaining power to resist reform and protect those who have killed unarmed African Americans.

The vastly different approaches to solving what has become a major election year issue have not only exposed the rift within the labor movement but also threaten to diminish law enforcement unions in liberal cities and could even affect the behind-the-scenes race to succeed AFL-CIO President Richard Trumka.

“There are a lot of unions that are very concerned about police brutality,” said Lowell Peterson, executive director of Writers Guild of America-East, which adopted a resolution calling on the AFL-CIO to disassociate itself from the International Union of Police Associations, the federation’s police union affiliate. “There’s definitely a lot of talk in the labor movement about, ‘Why is this happening and what can we as unions do about it?’”

The nation’s second-largest teachers’ union, United Teachers Los Angeles, last week voted to eliminate police in Los Angeles public schools and “redirect funding to mental health and counseling” for students. The Chicago school board voted down a similar measure to cancel a $33 million contract with city police that was backed by the Chicago Teachers’ Union in protests and rallies throughout the week.

The Martin Luther King County Labor Council, a body of labor organizations representing more than 100,000 workers in the Seattle area, voted to expel the Seattle Police Officers Guild earlier this month. The Association of Flight Attendants, which sits on the AFL-CIO’s executive council, passed a resolution demanding that police unions embrace change “or be removed from the labor movement.”

Even the leader of the Service Employees International Union, the second largest union in the country, which itself represents some law enforcement employees, has expressed openness to the idea of ejecting police unions from the movement, though she has stopped short of endorsing the move.

“That’s an option,” said SEIU President Mary Kay Henry of the Seattle federation’s decision to oust the police union. “I think another option is to use the union structure and leadership to educate and engage every member” in “re-imagining policing and criminal justice.”

That would have been unheard of just months ago — and demonstrates how much has changed since Floyd’s death at the hands of a Minneapolis cop sparked nationwide protests against police brutality.

While labor activists say it is unlikely that Trumka would ever support efforts to expel law enforcement unions from the labor movement, the push from locals and some national unions to ostracize the police, as well as the larger Black Lives Matter movement, could drive more modest change.

Police unions have fought back, saying that no one forced local governments to sign collective bargaining agreements that contain provisions protecting police and warning that attacks on law enforcement unions are part of a pattern of going after organized labor.

“No contract is rammed down the throat of a city or jurisdiction. They signed it, they negotiated it, they agreed to it,” said Jim Pasco, executive director of the National Fraternal Order of Police.

Sam Cabral, the president of the International Union of Police Associations, slammed Trumka’s response to the unrest, writing in a June 12 letter that the federation’s comments regarding America’s “history of racism and police violence against black people” were “inflammatory and patently false.” Cabral said he wouldn’t be willing to sit down with those who “have already indicted” law enforcement “based on one horrible incident.”

California’s largest police unions ran an ad in the Washington Post earlier this month calling for a national use of force standard, misconduct registry and “ongoing and frequent” training. Trumka also wrote in a recent op-ed that the labor movement is calling on Congress to adopt reforms including a chokehold ban and demilitarization.

Still, AFL-CIO leaders have maintained that the best way for the group to address the issue of police brutality is to “engage” its affiliates “rather than isolate them.”

Randi Weingarten, president of the American Federation of Teachers, an affiliate of the federation, said many members of the movement believe it’s important to have a conversation with police unions, “to the extent that they were willing to have it, for them to change and for us to change the criminal justice system.”

At the same time, the AFT recently passed a resolution calling to remove police from schools and instead train security personnel as “peace officers.”

“The role of the labor movement is to be a vehicle for the structural change that the Movement for Black Lives is demanding in policing and criminal justice all over this country,” she said.

Dozens of city police departments, including in Minneapolis, have added provisions to their contracts that delay officer interrogations after suspected misconduct, according to a 2017 study. Agreements with police agencies in Austin, Baltimore, Chicago and Washington, D.C., have included language that mandated the removal of disciplinary records from personnel files over time.

As more local unions choose to step away or distance themselves from the police, the pressure to break with law enforcement unions has generated an internal debate over the issue within the AFL-CIO executive council itself in recent weeks.

Color of Change, a racial justice organization, said it has discussed the possibility of ejecting police unions with at least five labor groups in the AFL-CIO.

Weingarten said “a couple members of the council raised it” during a three-day meeting in June. In a call earlier this month, American Postal Workers Union leader Mark Dimondstein brought up the matter, according to a person on the line.

The federation’s general board released several recommendations on June 9 for affiliate unions to address police violence but declined to drop the International Union of Police Associations as requested by the WGAE.

The debate could affect the quiet race to succeed Trumka, who is expected to step aside. The election won’t be held until the federation’s convention in October 2021, but Flight Attendants union president Sara Nelson, whose organization has taken one of the most progressive stands on the question, and AFL-CIO secretary-treasurer Liz Shuler are both rumored to be interested in taking the role.

In June, Nelson publicly accused AFL-CIO leadership of misleadingly attributing a statement opposing the ouster of the IUPA to the entire general board.

“To be clear, this issue was not discussed by the General Board today and there was no vote on the resolution put forward by WGAE,” she tweeted. “Also, collective bargaining empowers workers; it is not a means to oppress workers’ rights.

Tim Schlittner, the AFL-CIO’s communications director, disputed the claim. He said Trumka referred to the WGA-East’s resolution but that no one offered a motion on it.

The labor movement has successfully ousted unions in the past that didn’t abide by its principles. The Congress of Industrial Organizations expelled 11 member unions around 1950 due to their alleged links to the Community Party. The AFL-CIO also cut ties with three unions in 1957 over corrupt behavior. And throughout the Civil Rights movement in the 1950s and ’60s, the AFT moved to expel local unions that were racially segregated.

Police unions, meanwhile, insist that any efforts to oust them will blow back on all of labor.

“Those who are looking to kick police officers out of the union movement should be very careful,” said Patrick Lynch, president of the Police Benevolent Association of New York. “The rhetoric that they are using now is the same rhetoric that has been used to strip union protections from teachers, bus drivers, nurses and other civil servants across this country.”