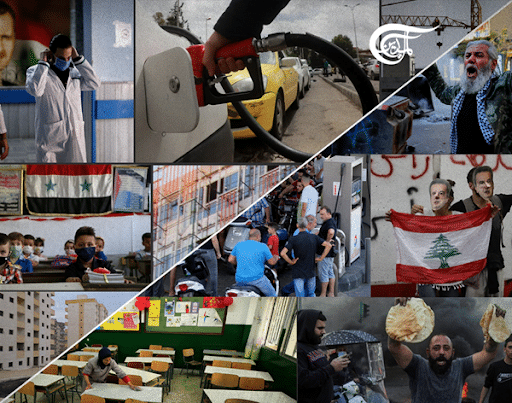 While the peoples of both countries have common origins, a key problem is, as many politically conscious Lebanese say: in Syria, there is a state, while in Lebanon there is a sectarian cartel of clans ruled by a handful of families.

How is it that, after ten years of war, the streets of Damascus are clean, basic food and services are available while Beirut remains a stinking metropolis of billionaires and beggars?

Separated by colonial design, neighbors Syria and Lebanon have evolved very different characters as nation-states and – more recently – have responded in distinct ways to Washington’s hybrid warfare, which aimed to extinguish independent political will in the region.

While the peoples of both countries have common origins, a key problem is, as many politically conscious Lebanese say: in Syria, there is a state, while in Lebanon there is a sectarian cartel of clans ruled by a handful of families.

How did this happen? Just as the British divided peoples in the former Ottoman territories it seized, by installing monarchies and the European Zionist colony, so the French carved out what they hoped might remain a loyal Maronite-Christian dominated coastal enclave.

RELATED CONTENT: The US May Have Lost the Military War in Syria, But Has Won the Propaganda War at Home By Portraying its Murderous Invasion as a Moral Crusade

The various Syrian communities, on the other hand, united in an anti-colonial struggle, to expel the French and reforge their nation. That led to a fairly strong state with some socialist features in a mixed economy.

In Lebanon, the Maronite majority has long gone, but the sectarian system remains, modified only slightly after a terrible civil war, and leaving a highly privatized system with little political will and few national institutions.

The result is that the two nations are dealing with the US-American siege of the region (wrongly called ‘sanctions’) in quite different ways. In Lebanon, there is even a minority that refuses to accept that the country is actually under siege.

However, Washington has spread the series of coercive measures imposed on Hezbollah (a leading member of the ruling coalition) to its domestic allies and the third party measures imposed on Syria and Iran also constrain Lebanon. The US is trying, without much success, to remove from government those who have resisted the Israelis most effectively.

Regional siege measures are a major factor in financial collapse, with Syria’s currency devaluing to a sixth of its value in the last 2 years, while Lebanon’s currency devalued to less than a tenth. Lebanon has relied much more on the cash economy and imports, a liability in a crash.

Enormous – often kilometer-long – queues for fuel are seen in Lebanon, while in Syria there is a better-organized ration system, providing 25 liters each per week, with text messages sent to advise when to collect.

And even with large parts of Syria’s own oil supply blocked and stolen by US occupation forces and their SDF proxies, Syria has been able to help Lebanon, in coordination with Lebanon’s Hezbollah, by rehabilitating and using its Baniyas port and refinery to channel Iranian fuel into Lebanon. After stern warnings from Hassan Nasrallah, and despite Israel’s sabotage war against Iranian ships, the Israelis and the U.S. were reluctant to sabotage this particular operation.

Still, Lebanon’s new ‘government’, led by billionaire Najib Mikati, has invited IMF overseers, who will make sure that Lebanon imposes no new subsidies to help the Lebanese people. The IMF-led destruction of food subsidies has been linked to starvation and food riots in many countries. Perhaps Lebanon has few subsidies left to destroy? By contrast, the bulk of poverty-stricken Syrians at least enjoy some relief through state subsidies on basic items such as bread, rice, and sugar.

Syria also maintains a mostly free public health system, despite great damage from the long war and siege, while Lebanon’s health services are highly privatized and mostly under ‘user pays’ regimes. Only in respect of pandemic measures is Lebanon ahead, due to higher levels of testing and vaccination. Both countries have much the same policies but Syria lacks test kits and vaccines.

There are still many Syrian war refugees in Lebanon, but here there is a reciprocal history. In the small Christian town of Maaloula, two years back, a local priest proudly showed me a letter from Hassan Nasrallah, thanking the town for taking in refugees from Lebanon’s south, during the Israeli invasion of 2006 which displaced tens of thousands. At the same time, the priest acknowledged that, when the town was threatened by the NATO-backed terrorists in 2014, it was young Muslim men from Lebanon (i.e. Hezbollah) who defended the town, often at the price of their young lives.

It is this broader Levantine cooperation that is bringing the two countries together again, under common siege. The Biden administration had to waive its own third party “sanctions” on Syria, to allow “the first official visit” of a Lebanese government delegation to Syria in ten years, i.e. during the long war on Syria. And that was because the only energy alternative to Iranian fuel that Washington could think of was to port Egyptian or Jordanian gas through Syria to Lebanon. In the event, the cheap Iranian fuel (to be paid for in the Lebanese currency) came through while the Egyptian-Jordanian gas idea is still a ‘pie in the sky’. But part of the blockade of both countries was lifted.

In the longer term, both countries need each other. Lebanon has been the highly commercialized coastal hub and Syria the stronger, productive hinterland. The key obstacle to deeper cooperation is Lebanon’s sectarian, privatized system. That prevents the little country from asserting itself either at home or abroad, just how the US, French and British want it to remain. The little ‘confessional’ state needs a new constitution.

Tim Anderson was a Senior Lecturer in Political Economy at the University of Sydney for 20 years. Now he is Director of the Center for Counter Hegemonic Studies. He researches and writes on development, rights and self-determination in Latin America, the Asia-Pacific and the Middle East. He has published many dozens of chapters and articles in a range of academic books and journals. His latest books  are Land and Livelihoods in Papua New Guinea (Australian Scholarly Publishing, Melbourne, 2015), and The Dirty War on Syria, Global Research, Montreal, 2016.