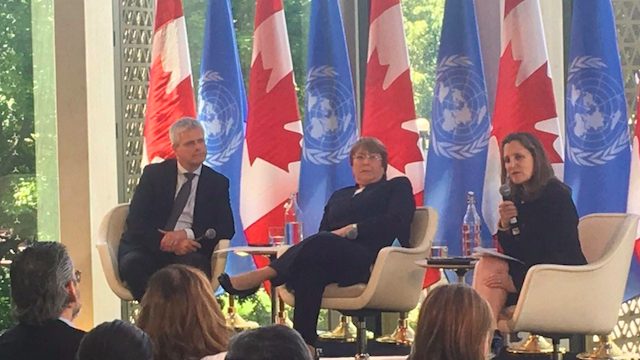 The modern way to overthrow a government the capitalist world doesn’t like is by claiming to do it in the name of supporting ‘human rights’. This requires that the target be portrayed as a rights violator.

As part of their effort to overthrow Nicolas Maduro’s government, Ottawa has funded and promoted a slew of groups and individuals critical of human rights in Venezuela. And a recent report by the UN Office of the High Commissioner for Human Rights (OHCHR) gave a boost to Canada’s faltering coup bid in that South American country. Overseen by former social democratic Chilean president Michelle Bachelet, the report paints Venezuelan security forces as extremely violent and the government as politically repressive.

While the Hugo Chavez/Maduro government’s failure to address insecurity/police violence in the country is condemnable, some context is required. Neighbours Colombia and Brazil also have significant problems with police and other forms of violence. As do countries such as Mexico, El Salvador, Jamaica, Honduras, etc.

Instead of offering a roadmap for remedying the scourge of violence and divisions in the country, the one-sided OHCHR report offers a public relations triumph to those pursuing regime change, which would likely plunge the country into greater violence. As former OHCHR Independent Expert Alfred de Zayas pointed out, Bachelet “should have clearly condemned the violence by extreme right opposition leaders and the calls for foreign intervention in Venezuela.” The human rights law expert, who produced a report on Venezuela last year, added that the “report should also have focussed on the criminality of the repeated attempts at a coup d’etat [because] there is nothing more undemocratic than a coup.”

On Saturday thousands marched in Caracas and other Venezuelan cities to reject the OHCHR report. For its part, the Venezuelan government responded with a 70-point rebuttal and Maduro wrote an open letter challenging the OHCHR report. According to Caracas, more than 80% of the 558 individuals interviewed by the OHCHR were not in Venezuela and Maduro asked, “can a political project legitimized 23 times at the ballot box in the last twenty years be called a dictatorship?” The Venezuelan government also criticized the OHCHR for failing to call for the lifting of unilateral sanctions, which the Center for Economic and Policy Research recently found responsible for 40,000 deaths from August 2017 to the end of 2018. The sanctions have become more extreme since. A Financial Times story last week titled “Venezuela sanctions fuel famine fears” and a New York Times op-ed titled “Misguided sanctions hurt Venezuelans” highlight their growing impact.

Canada has adopted four rounds of unilateral sanctions against Venezuela. It also contributed to the one-sided OHCHR report. In mid-June Bachelet met Prime Minister Justin Trudeau and foreign minister Chrystia Freeland. They reportedly discussed Venezuela. Bachelet also participated in a panel with Freeland on “the global fight for human rights.” It was moderated by former Canadian Ambassador in Venezuela Ben Roswell, who has been Canada’s most vocal advocate for overthrowing Maduro’s government.

The statement released by Bachelet’s office at the end of her two-day visit to Montreal and Ottawa reflects what could be described as an ‘imperialistic human rights agenda’. In a press release titled “Canada ‘a welcome ally’ in advancing human rights around the world”, Bachelet declared, “Canada is a leader in promoting the international human rights agenda and the benefits of the rules-based international order.” That’s a Trudeau government talking point that doesn’t withstand minimal scrutiny. During their mandate the Liberals have cozied up with repressive Middle East monarchies, backed brutal mining companies, justified Israeli violence against Palestinians, enabled a corrupt, illegitimate and murderous Haitian president to remain in power, allied with an unconstitutional Honduran government, deployed troops on various NATO missions, failed to end Canada’s ‘low level war’ on Iran, refused to support nuclear weapons controls, increased military spending, etc.

The OHCHR is dependent on countries hostile to Maduro for its funding. About 45% of its budget comes from general UN funds and most of the rest from discretionary state contributions. Norway, Britain, European Commission, Sweden, Denmark and the US are its top donors. Canada was the OHCHR’s ninth biggest national funder in 2018 and the tenth biggest in the first six months of this year.

What prompted me to dissect the OHCHR report was an email sent to my mother from a politically sympathetic family member who asked whether it was a mistake to dog Trudeau on Venezuela. (At a public event last month I repeatedly yelled “Hands off Venezuela”, “end illegal Canadian sanctions”, “non a l’intervention Canadien au Venezuela” a few feet from the Prime Minister and a week ago I yelled “hands off Venezuela” and “end the Illegal Canadian sanctions” as Trudeau left a press conference. In a similar vein, some 50 individuals confronted Freeland about Venezuela at a Canada Day barbecue and last week activists in London, Ontario, challenged Trudeau on Venezuela at a music festival.) My relative wrote that he supported countries’ right to self-determination but felt that Bachelet’s report was a credible indictment of the Maduro government.

But if the attempts to overthrow the Venezuelan government were really about human rights violations how do you explain the lack of similar Canadian (or other Western nations) action against dozens of countries with terrible human rights records but that do not challenge capitalism?

Even those inclined to believe some of the more extreme criticisms leveled against the Venezuelan government should support the protesters, not our government. The likely result of Canada succeeding in its current path is a civil war in Venezuela. Moreover, it would set a bad precedent if Canada were to succeed in its brazen coup mongering. (In a further sign of the brashness of their campaign, the Professional Association of Foreign Service Officers gave Patricia Atkinson, Head of the Venezuela Task Force at Global Affairs Canada, its Foreign Service Officers award last month. The write up explained, “Patricia, and the superb team she assembled and led, supported the Minister’s engagement and played key roles in the substance and organization of 11 meetings of the 13 country Lima group which coordinates action on Venezuela. She assisted in developing three rounds of sanctions against the regime.”)

Whatever one thinks of Maduro, Canada’s interference in Venezuela’s internal affairs and unilateral sanctions contravene the “rules-based international order” Trudeau, Freeland and Bachelet claim Ottawa upholds. But, Parliament and the media largely play along so it’s only through grassroots activism that we can hope to pry open the discussion and rein in our government.