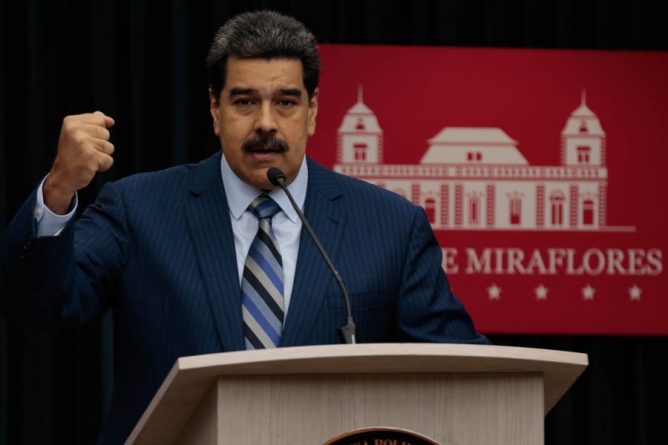 Venezuelan President, Nicolás Maduro, provided more details on Wednesday, in a press conference with national and international media, about a Coup plan against him, gestated from the White House to assassinate him and make “a Council of Transitory Government” in Venezuela. He announced that John Bolton, National Security Adviser of the Trump administration, was appointed head of Plan Venezuela, who acts with the complicity of Colombia to carry out this coup.

“Today I come again to denounce the plot that the White House is preparing to violate Venezuelan democracy, to assassinate me and to impose a dictatorial government in Venezuela,” Maduro complained.

“Mr. John Bolton has been appointed again, as head of the plot to fill Venezuela with violence and to seek a foreign military intervention, a coup, assassinate President Maduro and impose what they called a ‘transitional government council’. I’m telling you to unveil your plans.”

John Bolton is an American diplomat who has served in several Republican administrations and is currently the National Security Adviser to Donald Trump. He is involved in a wide variety of research centers and conservative policy institutes, including the disputed National Rifle Association (NRA), the American Enterprise Institute (AEI), the Jewish Institute for National Security Affairs (JINSA), the Project for the New American Century (PNAC), Institute of East-West Dynamics and the Council for National Policy (CNP), several of these organizations are “think tanks”, generators of right-wing thoughts and intellectuals.

Bolton is considered a neoconservative “hawk of war” of the extreme right. He has been in favor of “regime changes” in countries like Iran and North Korea, and has emphatically requested to finalize the treaties with Iran on nuclear weapons. He supported the invasion of Iraq and still today supports the position he had at that time. He also supported military actions in Syria, Libya and Iran. Maduro reported that Bolton alleges that “he can decide on his own everything that has to be decided, and in the case of Venezuela, he says he will overthrow the Venezuelan government,” Maduro points out that “it has turned Colombia into the base of operations of these maddened and hate-filled plans. You can be sure that we are going to defeat them!”

More than 700 paramilitaries train in Colombia

The Venezuelan president indicated that Bolton has spoken of “a plan that is already under development to assassinate me,” and that there are several places where mercenary and paramilitary forces are being trained, along with Colombia.

“The Colombian government of Iván Duque, who does not want diplomatic relations, politics or communication with the legitimate government of Venezuela, is an accomplice of John Bolton’s plan to bring violence to our country, and so he denounced it. And our Bolivarian National Armed Forces must be more and more prepared to guarantee the stability, integrity and peace of the country, in the face of any threat. ” Maduro said that in the municipality of Tona, in Norte de Santander, Colombia, they are training a paramilitary group called “the G-8” or “the gochos”. He indicated that there are 734 mercenaries, including Colombians and Venezuelans, to at any time take false positive actions and false flag, to simulate “attacks as if they were Venezuelan forces against military units on the border and initiate a violent escalation that confuses public opinion and justify any other military escalation action against Venezuela. ”

Maduro indicated that, if the Colombian government had good faith, it could investigate and capture “in less than an hour” the mercenaries who are training in this Colombian municipality.

The Venezuelan President also denounced the air base of Tolemaida in Colombia, one of the 7 bases that the United States maintains in that country, where another group of mercenaries would be training to attack Venezuela.

From the Eglin base in the United States

He also denounced that a significant group of command forces train in US territory, at the Eglin base of the US Air Force, located in the state of Florida, 5 kilometers southwest of Valparaiso in Okaloosa County. There “groups of special forces are being trained for a surgical aggression against Venezuelan air and military bases. Its objective is to disembark, take and neutralize the Libero Air Base of Palo Negro, the naval base of Puerto Cabello and the air base of Barcelona. ” Indicates that also from the United States the money from secret parties has been increased, directed at bribery and break of Venezuelan officials, so that they publicly made statements against the Venezuelan government. “They have increased the figure from 40 million to 120 million dollars.” He assures that, if this were seriously investigated, they would find John Bolton’s hands on these resources.

Maduro also complained that the retired colonel of the Bolivarian National Guard, Oswaldo Valentín García Palomo, is making calls from Colombia offering large sums of money to Venezuelan officials and their families, who have made the respective complaint to their superiors.

He noted that Bolton traveled to Brazil last week, and that he “assigned missions for military provocations in southern Venezuela, on the border with Brazil.” He denounced that the incoming government of Jair Bolsonaro is cooperating extensively: “One is crazier than another.”

Maduro also recalled that Hamilton Mourao, the new vice president of Brazil who is accompanying Jair Bolsonaro, told Ansa that soon there will be a coup in Venezuela and that, when executed, Brazil’s troops will act in Venezuela as “troops of peace “sent by the United Nations.” To declare what he has declared is crazy, “said President Maduro. “To say that a Brazilian military force is going to enter Venezuela is crazy. What do you think? That this land does not have anyone who care, has no one to defend it? That has no people and has no armed force? Let us never make mistakes, because we are going to teach them a lesson they will not forget in a thousand years! We are going to give a lesson of dignity and strength also to the crazy people of the extreme right, whether they are from Brazil, Colombia or wherever they are! “He exclaimed indignantly.

“I imagine those crazy coward will come in front of the troops,” Maduro said of Mourao. “Between Brazil and Venezuela there will be peace and cooperation, beyond what you think”. He stressed that the people of Brazil and even high officials of that country have told him that they will not lend for these plans.

The president of Venezuela indicated that Venezuela is not going to go back to the 19th and 20th centuries, to the times of colonialism or neocolonialism, pretending that Venezuela kneels. “We do not kneel. We do not surrender, today or ever, that the American Empire and the White House know! ”

He reiterated his invitations to dialogue and his invitation to the president of the United States, Donald Trump. “The only requirement is respect; For the rest, we can talk about whatever you want, where you want and when you want, “he said. He called Trump to turn the page of the conflict and the permanent conspiracy, and “hopefully one day we can have respectful relationships” with the people [government] of the United States.

Questioned about the actions of the so-called Lima Group threatening to break diplomatic relations, Maduro responded: “Governments, do what they want. If you want to leave Venezuela with your ambassadors, let them all go, now! Let them go! Venezuela is not going to be blackmailed by anyone. Who wants to go with his ambassador, there is the airport of Maiquetía! And whoever stays, have to do it respecting Venezuela. ” He indicated that the country has enough friends in the world, including great powers, that “respect us, support us and love us”.

He also responded to complaints from the US government about the visit of Russian Air Force aircraft for combined exercises with Venezuela. “The United States, which has more than 700 military bases in the world and the largest military budget in the world, with 40 million poor people, comes to say that we (President Putin and I) waste money because we have military cooperation. That is called immorality! ” He pointed out that if the United States devotes 10% of its annual military budget to social expenditures, in 5 years would end poverty in Africa.

The President said that he will be President at least until January 10, 2025, and that he will fulfill the expectations of the consensus of the Venezuelan revolutionary forces and the people.

Maduro said that on Thursday there will be an event in the framework of the Economic Recovery Plan where he will make “very important announcements”.