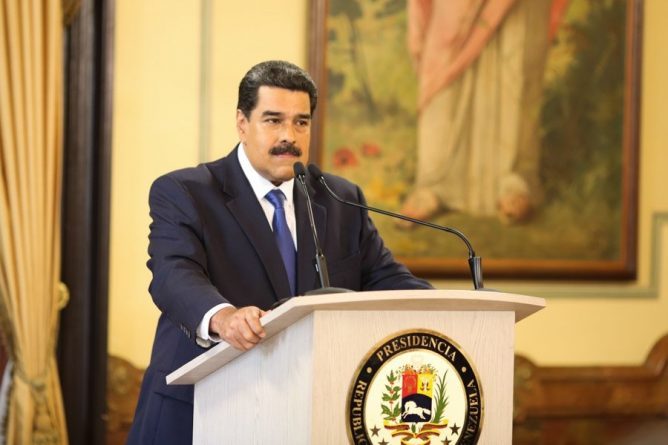 Venezuelan President Nicolás Maduro confirmed on Friday that he will not allow the “humanitarian aid show”, referring to the cargo that arrived at the border with Colombia at the request of Juan Guaidó. Guaidó, deputy to the National Assembly in contempt, proclaimed himself  the nation’s “interim president” on January 23.

“Humanitarian aid has been turned into a show to justify intervention in the country. It’s a cheap show to humiliate Venezuelans. They block our almost 10 billion dollars in the world, they steal our gold, they block our money from oil in the world, and then they come, take out 20 million dollars, and say to the beggars, hold out you hand, take this. Crumbs.”

“Venezuela is not going to allow the show of false humanitarian aid, because we are not anyone’s beggars!” Maduro told a press conference at the Miraflores Palace in Caracas.

He indicated that the media have imposed the version “that Maduro refuses to receive help, the gift. It’s a rotten gift, it’s a stacked deck! It is a very nice package on the outside, but inside it brings the poison of humiliation and tries to cover up the biggest crime that is committed, which is the crime of stealing resources through the blockade and through the sanctions” imposed by the United States government on Venezuela.

“Stop the blockade! Cease the financial persecution! Cease the sanctions and leave Venezuela, calm, quiet!”, Maduro emphasized. “It’s not a gift! They are not giving us anything! They are stealing from us! It is a robbery of our riches! “, Maduro reiterated to the question of a journalist.

The Venezuelan President explained: “We have the capacity of labor and production to serve 6 million families monthly, permanent homes, as they are not served anywhere in the world. We have the capacity to provide education to our children, to give health to our people, to give housing, employment and social security to Venezuelans. ”

“There are problems, but Venezuela is not in any humanitarian crisis (except the one ) fabricated in Washington four years ago, to intervene in our country. This is the dossier that completes the intervention,” said the Head of State. “If you want to help Venezuela, release the money that you have blocked and sequestered from us!”, exhorted the Venezuelan President.

“It’s a macabre game: we squeeze them by the neck and make them ask for crumbs,” Maduro said of the actions the US government is taking against his country. “We stole the money and then threw them toilet paper (hygienic), as Donald Trump threw to the people of Puerto Rico,” said the Venezuelan President in reference to the actions of the US President in October 2017, when he visited the Puerto Rican island for 5 hours after it was devastated by hurricanes Maria and Irma, and he threw toilet paper packages to people who really required humanitarian aid.

“They better go and use that food in the town of Cúcuta, which has 40 percent unemployment,” said President Maduro. He noted that there they have 70 percent poverty and 30 percent extreme poverty. “Stop the show. Why are they not going to bring help to the people of Cúcuta and Colombia? Why do they not give them employment, free health, decent income? ”

“A country does not develop with crumbs and begging. That is the truth, and we say it with dignity.”

“It’s a message of humiliation”

“It’s not any help; It is a message of humiliation to a people, because, if they wanted to help, all financial persecution and the economic blockade, which steals 10 billion dollars from us, should cease. ” He pointed out that, with this money, everything the people of Venezuela need is widely guaranteed.

On the accusation by the US Secretary of State, Mike Pompeo, that the Venezuelan government has links with Hezbollah, Maduro recalled that Hezbollah is a Lebanese political party with deputies and elected officials and assured that, although Venezuela does not have political relations with that party , the country has accepted hundreds of inhabitants  from that country and all of them have their full political liberties.