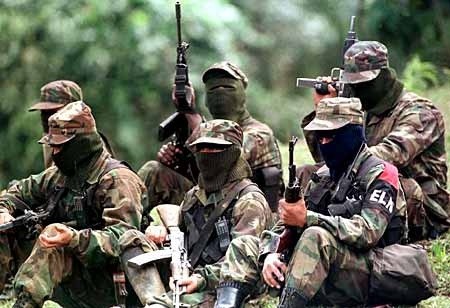 Havana (GPA) – In a rare interview with English media from Cuba, the leaders of Colombia’s ELN pledged to be “first in line” to help repel any US attack on Venezuela.

Late last month many were stunned when the internet noticed Donald Trump’s National Security Adviser John Bolton leaving a White House briefing with his notepad out for the cameras to see. As many readers of this site probably remember, that notepad didn’t have much on it, but one line stood out.

That standout line was, of course, an apparent topic discussed in the briefing of sending “5,000 troops” to Colombia. For his part, Venezuelan President Nicolas Maduro has warned the United States against any plans like these and most recently asked Donald Trump why he would want “want a repeat of Vietnam,” should he try to topple the Bolivarian government.

Now it seems an element necessary to make any potential war as terrible as Vietnam has been added to the mix in Venezuela with renewed promises of solidarity from professional guerillas who have been fighting the Colombian government since the 1960s, the National Liberation Army (ELN). These longtime (sort of) allies of the Bolivarian revolution have operated across Venezuela’s border for years and now they have promised to bring that expertise to any US intervention according to an interview with members of the group’s leadership published by The Telegraph last weekend.

Speaking from exile in Havana, ELN commander Israel Ramírez Pineda, also known as Pablo Beltran told the Telegraph that should Donald Trump plan any operations based out of NATO partner-state Colombia they would first have to get past the guerillas. The fighters from the ELN largely operate near (and across) the border with Venezuela and between there is vast swathes of jungle and harsh terrain on the way from Bogota to Caracas.

Although this porous border area is historically hard to patrol with or move any type of conventional military formation through it has created the perfect environment for a group like the ELN.

Beltran told The Telegraph that it was “certain” than any plans by the US would likely make the ELN “the first in line.” He then went on to give a warning that should the US “come for us, we will respond. We won´t run away and hide.”

Noting that this territory is where the ELN thrives, the commander in exile also stated his confidence in the ELN’s abilities and the fact “We’ve learned we don’t need large structures because we become easy targets,” meaning US troops may want to prepare for intense jungle warfare. Beltran noted that the ELN has been crossing back and forth into Venezuela for years and because “in some areas, the border is an imaginary line.”

Beltran also claims there is another potential pool of recruits waiting inside the borders of Venezuela. According to the Guerilla leader, “we also have to remember that there are millions of Colombians living in Venezuela, who fled the onslaught of right-wing paramilitaries at the height of the Colombian conflict. Those that were ELN didn´t stop being ELN when they crossed the border. This seems to imply there are other semi-retired ELN who would still instinctively be opposed to any US war in Latin America.

While the Bolivarian government in Venezuela and the ELN do not publicly have any kind of formal alliance, this interview with Beltran shows that there is more opposition waiting in Venezuela beyond just the military. With groups like the ELN (and other local militias as well as groups that would likely form to oppose any US invasion) it is key for the Trump regime to realize there are more threats waiting for them in Latin America than they may realize. The ELN has fought Washington’s death squads before and is more than willing to do it again.