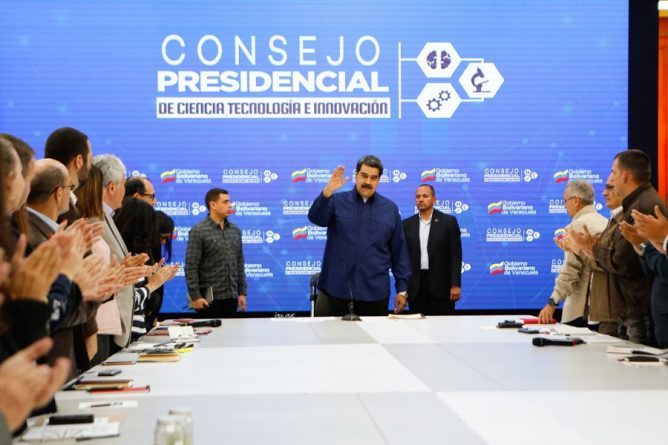 The President of Venezuela, Nicolás Maduro, responded forcefully to his US counterpart, Donald Trump, who at a political event in the International University of Florida – Miami, again threatened the active members of the Bolivarian National Armed Forces (FANB) to “accept the generous offer” of supposed amnesty offered by the deputy Juan Guaidó, or else, “they will lose everything”. Maduro responded that Trump “believes he is in a position to issue orders, and that the FANB will carry out his orders. It is an offense to dignity, to shame!”

During an event with the Presidential Council of Science, Technology and Innovation at the Miraflores Palace, President Maduro pointed out that Donald Trump spoke “in an act of politics to divert public attention from the United States”, a few hours after it was known that 16 states plan to sue him for trying to apply a “national emergency” to build the wall with which he hopes to curb immigration to the United States.

On Monday Trump reiterated his threats to the components of the Bolivarian National Armed Forces (FANB) and asserted, once again, that “all options are on the table” regarding the situation in Venezuela.

From the International University of Florida, in Miami, Trump said: “Today I have a message for all the officials who are helping to maintain” the Venezuelan President, Nicolás Maduro “in office. The eyes of the world are upon you. They can choose between accepting President Guaidó’s generous offer of amnesty and living their life in peace with their families and compatriots, or they can choose the second way: to continue supporting Maduro. If you choose this path you will not find a refuge, there will be no easy way out. They will lose everything, ” Trump threatened.

The US president said that “the Army has a vital role” in the transition of democracy in Venezuela, while noting that although his government seeks “a peaceful transition of power, all options are on the table.” He added: “Today I ask every member of the Maduro regime to end this nightmare, for the people, of poverty, hunger and death,” Trump said.

“They think they are the owners of the country, in their arrogance and contempt for us. And Donald Trump believes in his power to give orders, and that the FANB will carry out his orders. It is an offense to dignity, to shame!” Maduro emphasized.

He recommended that Trump deal with internal affairs in his country. “(He has) enough problems and very serious ones!”. He accused him of trying to fabricate a crisis, create provocations and threaten Venezuela militarily. “Take care of your own problems”,  among them 40 million poor people.

The Venezuelan president authorized the FANB and Vladimir Padrino López, the Venezuelan defense minister, to respond to Donald Trump. “We are going to respond with morality, with truth, with unity! They underestimate us, but Venezuela has to continue its work,” said the Venezuelan President.

In his speech in Miami, Trump also said that “a restoration of democracy in Venezuela” supposedly will “promote democracy” in Latin American countries such as Cuba and Nicaragua, in open disrespect to these nations. “I have come here to proclaim that a new day is coming in Latin America. In Venezuela and throughout the hemisphere socialism is dying and democracy, freedom and prosperity are reborn,” said Trump.

In this regard, Maduro replied : “Trump was in Miami with tired rhetoric” and with a speech that borders on Nazism “questioning the right of our country, free to adopt the ideas of Christian human socialism.” He pointed out (Trump was trying to) “prohibit ideologies, political diversity ” and trying to impose “the sole thinking of the supremacists of the White House.” He pointed out that “Venezuela will continue in its diversity of ideas”, respecting “the diversity of beliefs of all”.

“They want to impose a colonial model on us: either we think like Donald Trump and like the gringos, or we become their slaves. They want to enslave us! “Maduro said.

Trump also paid tribute to the terrorist Oscar Pérez , responsible for the attack on the headquarters of the Supreme Court of Justice and the Ministry for Internal Relations, Justice and Peace, in Caracas, in June 2017. He also acknowledged the work done by David Smolansky, a fugitive from Venezuelan justice, in the “transition process”.