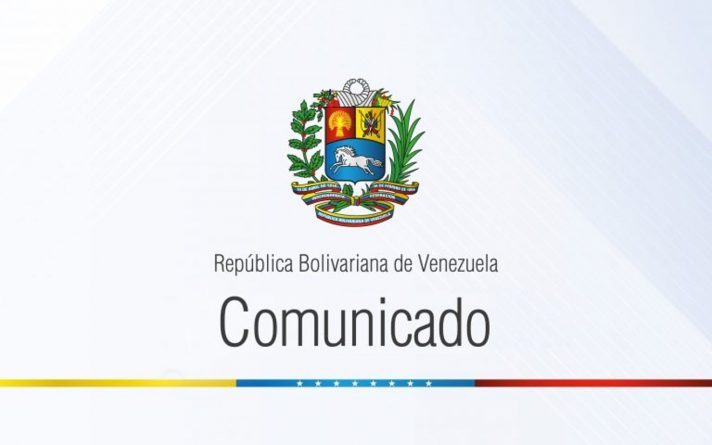 The Bolivarian Republic of Venezuela denounced on Monday, through a statement before the international community, the new threat of military aggression issued by the president of the United States, Donald Trump, in violation of the principles established in the Charter of the United Nations Organization.

“On this occasion, the threats have been extended to the peoples of Cuba and Nicaragua, fraternal countries to which Venezuela sends its words of solidarity and extends its embrace of solidarity,” said the text.

On Monday, Trump reiterated his threats to the components of the Bolivarian National Armed Forces (FANB) and asserted, once again, that “all options are on the table” as regards the situation in Venezuela, after the self-proclaimed deputy of the National Assembly in contempt and legal nullity, Juan Guaidó, on January 23, the Venezuelan News Agency (AVN) reported

Here is the full statement:

The Bolivarian Republic of Venezuela denounces before the international community that, once again, the President of the United States, Donald Trump, has threatened Venezuela with military aggression, in clear violation of the principles established in the Charter of the United Nations, reiterating, in the midst of an anachronistic ideological harangue, that “all options remain on the table” in relation to Venezuela, which includes the military option, as he has been proposing since August 11, 2017.

On this occasion, the threats have been extended to the peoples of Cuba and Nicaragua, fraternal countries to which Venezuela sends its words of solidarity and extends its embrace of solidarity.

Given the evident failure of the coup agenda designed in Washington, with the aim of establishing a puppet government in Venezuela to endorse the looting of its resources, Donald Trump now intends to dictate direct orders to the Venezuelan military to ignore the Constitution, demonstrating his poor understanding of the spirit of loyalty of the Bolivarian Armed Forces of Venezuela, forged in the legacy of struggle of Simón Bolívar and his brave Liberation Army, who over two hundred years ago defeated the most powerful empire that existed then and decided forever never to bow to any foreign power.

Venezuela demands the immediate cessation of all unilateral coercive measures applied against it, which constitute an illegal and criminal blockade against the Venezuelan people while denouncing before the international community that any disturbance of peace in Venezuela will be the responsibility of the supremacist United States government. and its President.