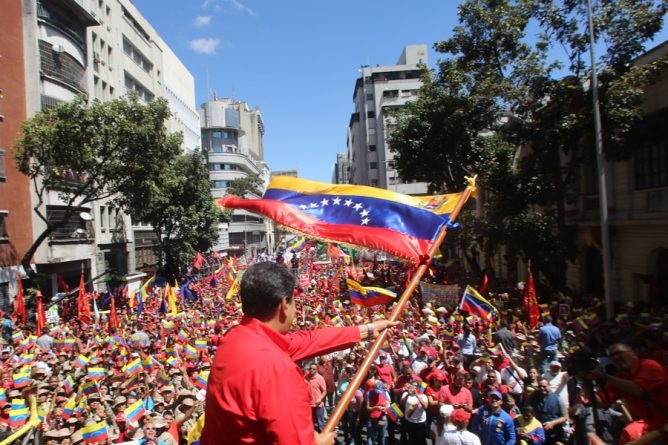 This Saturday during the great chavista march in Caracas, for the defense and peace of Venezuela, President Nicolás Maduro announced that he has taken the decision to break political and diplomatic relations with Colombia.

“Colombia has lent its territory to attack and intervene in Venezuela. Iván Duque has an angel face but what he really is rock thrower, he is the devil himself. That is why I have decided to break political and diplomatic relations with Colombia and your diplomatic staff must leave the country in 24 hours , enough is enough. It is not the people of Colombia, it is the oligarchy, the government” asserted the Venezuelan leader.

The Government of Colombia and its President Iván Duque, has undertaken since taking office a servile policy to the interests of Donald Trump, using the Colombian territory as a platform for aggression and military intervention in Venezuela.

Today two different staged operations have been disarmed by Venezuela due to the excellent job of the law enforcement agents and the journalistic work present allover the border with Colombia.

The first an operation very well synchronized in which 3 Venezuelan National Guards defeat to Colombia using 2 armored vehicles VN-4 that tried to provoke death and injures but they didn’t count with the present of the Telesur Journalist Madeleine Garcia that covered in video the whole operation and the Venezuelan politician waiting to welcome the defectors to Colombia along with Colombian Migration Authorities. They wanted to blame the Venezuelan National Guard for the killing of people.

The second and most recent one in which a group or Colombian and Venezuelan right-wingers were forcing the entry of trucks with the so call “humanitarian aid” to Venezuela. They were launching molotov cocktails to the Venezuelan National Guard but ended up burning two of the trucks and intermediately they blame the Venezuelan National Guard for the situation that happen in the Colombian side of the border where Venezuelan law enforcement can not be. The whole situation can be seen clearly in the twitter post below:

In both cases is evident the complicity of Colombian authorities in inciting or allowing the incidents to happen.