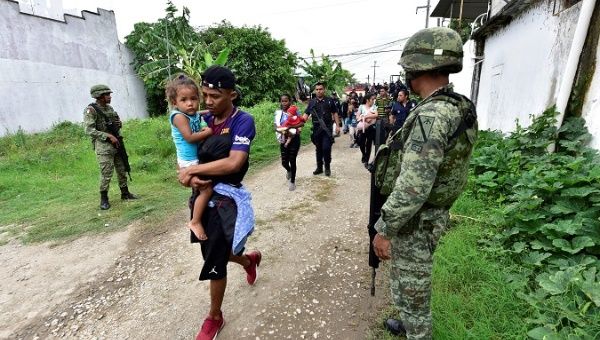 This tragic event happens a day after the Mexican Foreign Minister warned about strengthening immigration controls.

A Salvadoran woman died Friday and two men were wounded in an armed attack on the pickup truck that the migrants were riding in while traveling through Veracruz State in Mexico.

Jose Francisco Gonzalez, 55, who suffered a bullet wound to his left foot and Jose Roberto de Paz, 26, who was shot in his left hand, were both taken to a hospital in Las Choapas, Veracruz to be cared for.

Although the attackers have not been officially identified, “eyewitness accounts say the three Salvadorans were traveling in a pickup truck and were being pursued by alleged elements of the National Institute of Migration (INM) and the Federal Police,” reports the Excelsior.

Another national newspaper, La Jornada, said Friday that the vehicle carrying the Central Americans did not stop at a highway immigration control and “the federals shot them.”

The tragic event in Veracruz, a state that has become part of a popular route for Central American migrants and refugee seekers trying to reach the U.S., happened the day after the Mexican Foreign Minister Marcelo Ebrard said that his country would impose stricter controls on migration flows through the country as part of a deal made with President Donald Trump’s administration in an effort to avoid economic sanctions by the U.S. government.

“If you want to cross our territory to reach another country, we are going to tell you: ‘we do not want you to cross our territory’ if you are just passing through,” Ebrard warned Thursday. On Friday, Ebrard pres​​​​​​​ented the accord to Congress. The agreement includes the deployment of some 6,000 National Guard members, an additional 825 National Institute of Migration (INM) workers by June 18. Hour later, INM Director Tonatiuh Guillen Lopez presented his resignation without specifying his reasons for the decision.

RELATED CONTENT: Trump Slaps Mexico with 5% Tariffs on Everything Until the Immigration Issue is Solved

Per their agreement, Trump’s officials will evaluate how well Mexico is complying with the agreement after 45 days. If Mexico doesn’t live up to the agreed upon measures by U.S. administration standards, it may implement progressive tariffs on Mexican imports, essentially going against the standing North American Free Trade Agreement (NAFTA).

Mexico’s Minister of Economy Graciela Marquez said though the administration is ready to retaliate in kind if the U.S. imposes higher tariffs on its exports. Multilateral procedures to defend Mexican trade may also be initiated.​​​​​​ ​​​​​​​

“There is an armed attack against migrants in La Venta-Agua Dulce Road. The Mesoamerican Migrant Movement reports one woman killed and three injured.”

The motivation for the Friday attacks isn’t known. However, human rights defenders warn the killing was racially prompted. ​​​​​​​Central Americans are often attacked, kidnapped, extorted, and even killed in Veracruz on their way to the U.S. Last December, at least one woman was killed and three others injured while traveling in a truck through the state trying to reach the border with Texas.

#URGENTE: There is an armed attack against migrants on the road La Venta – Agua Dulce, there is talk of at least one migrant woman killed and 3 injured, a check by the Federal Police and the @INAMI_mx. It is located kilometers away from the place of events.

Foreign Minister Ebrard said Friday he will ask the Group of 20 (G20), whose next summit is June 28, to take note of the high numbers of migrants fleeing Central America.

“We’re going to present a document for the Group’s consideration… essentially, asking that they stop shutting their eyes to the crisis that we have in Central America,” Ebrard said.​​​​​​​ Last week the minister named Brazil, Panama and Guatemala as other regional countries that need to take responsiblity for the increased amounts of Central American migration.

“If the measures we are proposing are not successful, we have to discuss with the United States and with other countries, like Guatemala, Panama and Brazil, … a regional model,” said Ebrard last Monday.