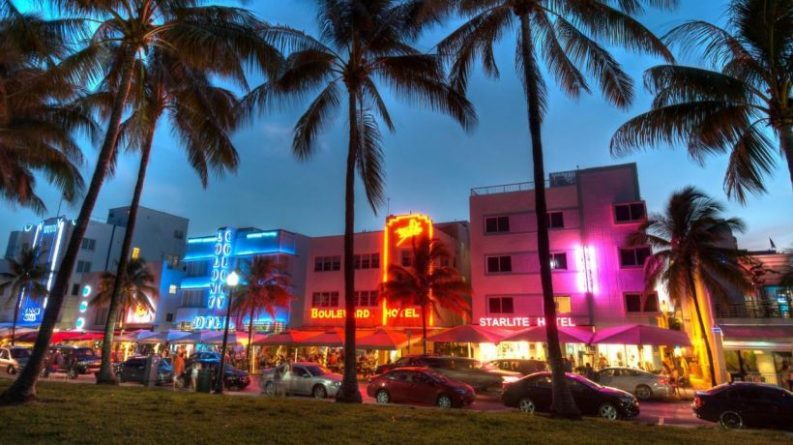 It looks like a sofa dialogue but it’s American television for the Latino audience. Recorded in Miami, Jaime Bayly’s show is one of the most watched by enthusiasts of a military intervention in Venezuela, whose climax came with the interview with Patricia Poleo (a few days ago).

An analysis of the serious discourse spoken in this half hour of interview would yield to a conclusion that has been clarified over the decades: the subjectivity of the Venezuelan (upper-)middle class is taken by Miami. Its imaginary is shaped like a shopping mall in Brickell, the financial district where their aspirations rest. Every time you hear on the street or read on your screens that Cuba or the G2 dominate Venezuela, always think of Miami.

According to this thesis, Cuban influence has been greater than global neoliberalism in Venezuela. Cuba planned on February 27, 1989. Cuba formed Hugo Chavez and crowned him supreme dictator. Cuba spies on us through the led light bulbs. Cuba killed Chávez to make way for its most faithful puppet, Nicolás Maduro, in order to better administer Venezuelan resources: the Mayamera imagination has no limits or respect for any kind of fictional pact.

(But there is a new thesis, continued from the failed RussiaGate: “Venezuela is not governed by Maduro, it is governed by Russia”.)

Carlos Oteiza had already documented, with his “Our Mayami” , the landscape that was affirmed on the conscience of the (upper-)middle class, swollen with petrodollars and in revenge against the peripheral and underdeveloped of his own country, paradoxically anchored to that reality by those from the vanguard of the Venezuelan society before Chávez, its thriving (upper-)middle class, they only understood the country in terms of “cadiveros” (subsidized dollar clients).

Now the extension of this way of thinking crosses all Venezuelan society, the result of crisis and war.

From this Miami celebrated by the now representatives of “the diaspora” are connected individuals called journalists like Bayly and Poleo whose propaganda purposes are linked to a policy that pays tribute to colonialism. The frustration they feel when not realizing the longed awaited invasion of the southern Caribbean basin does not hide when the Venezuelan journalist, based in Florida, vociferates with energy: “I am a coup plotter.  When Chavez was sworned in, I began to conspire.”

Miami is the center of the conspiracy, not only because Poleo says it, but because in that city is symbolically, politically and economically what Venezuelans of that lineage, so proudly anticommunist and liberal, claim for Venezuela. It is the land of Tony Montana (representing the declining Cuban “gusanera”), the concrete mountains as a laundry for narco-dollars, the shopping centers in each corner, the Doralzuela that evokes the eternal aspirants to have American citizenship.

It is, however, a failure for this attempt at supremacism based on petrodollars, a kind of occidentalisis of “Los Palos Grandes” (Caracas upper class neighbor), which is taken to Florida as a way of representing the future of Venezuela (without chavismo): daughter of an invasion and later annexation, according to the liberal-slave ideology of the Founding Fathers, the South belongs to the “barbarians”, the North to the “civilized”, even within the United States. Poleo prefers this regime of internal colonialism to the “banana republic” that she so hates and that Washington so much promoted in the 20th century.

Marco Rubio, a senator from Florida, is, in fact, not the most intelligent anti-venezuelan operator, but he is the most daring of those who represent the “mayamero” axis that tries to press for a military intervention in Venezuela. His role has been key in the siege and suffocation of the Venezuelan population, especially in the coverage and cooperation of actions between Washington and Miami.

In addition, with this Mayamera interview we can diagnose a trend towards denationalization. Poleo says: “This is the first time we are so close, but I do not see it that easy anymore. The opportunity is being erased.”

That is why she blames those around Juan Guaidó, whom she naively calls an autonomous personality, as if he were able to decide the next step of his masters. The dream of leaving the traditional politicians to their fate, only with the support of the United States, is the proposal of the Mayameros operators: “I hope the opposition parties abandon Guaidó.”

They are terrified of the word “cohabitation”, even along with their own political contemporaries (“the dinosaurs”, according to Poleo), so they declare a war of extermination against the Other “barbarian” or “uncivilized”. Bayly makes these kinds of calls constantly from his recording studio in Miami.

The strategy is not turning out as these remnants of the Cold War want. They seek to overturn the plan because they believe that Guaidó is going to be abandoned: “I can not recommend to Guaidó that he stay in Venezuela, besides, if he is put in prison, people will not go out on the streets. People are trying to solve their day to day problems. And the United States is not going to do anything to free him”.

Why? Both Bayly and Poleo found the Holy Grail, even if they do not look at themselves in the mirror: “The majority of US citizens, and not just Trump, believe that we are all Mexicans.  Here I have been called Mexican.”

Conclusion: “Operation Freedom has to come from abroad.” Poleo appeals to the deserters of the Bolivarian National Armed Forces (FANB) and to an early meeting of the “interim” with that force in Washington, ready for the mercenary invasion: “What excuse can Trump have if Guaidó appears with an Armed Force in the exterior?”

There can be no exclamation from someone who is concerned that Article 187, number 11, is not debated in the National Assembly, as if a unilateral action would not have other consequences beyond what journalists of that caliber try to cover up. They do not count on the FANB because “Padrino López is not going to give-up”, they only hide in the strength of a power who is an enemy of multipolarity.

It seems that the approach, beyond “ending a system that has destroyed the country’s institutions,” means eliminating the borders that exist between “the community of free lords” and resources in Venezuelan territory, where the barbarism of the South reigns. Washington intends to redefine the limits in the Caribbean and the rest of America, with the aspirants of always supporting the neoliberal utopia of Patricia Poleo, whose script was clearly written in Miami.

Neoliberalism being a rising phenomenon since the 1970s, presenting these journalists as “the new thing”, like Guaidós with a minimum rating, given to the media hoax and the ideology of dependence, is a dangerous joke in times of war. They represent a tiny part of Venezuela, not only because they support a military intervention against the will of the majority; especially because they bleed from the wound of returning to a colonial status of “mayamero” capitalism.