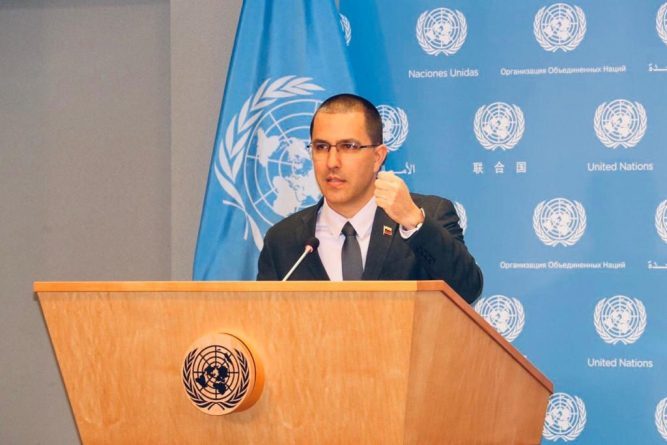 The Minister for Foreign Affairs of Venezuela, Jorge Arreaza, held a press conference from the headquarters of the United Nations Organization in New York, where he repeated the denunciation of the coup d’état executed by the United States government against his country. Arreaza warned about the direct and open participation of the US in the organization, promotion and financing of the aggression, giving orders to the opposition and trying to force an internal military reaction. However, he stressed that the Bolivarian National Armed Forces (FANB) has remained “loyal to the Constitution.”

The chancellor regretted that the European Union (EU) and its institutions have made the mistake of recognizing “the falsity of something that does not exist”, in reference to its position of support for the self-proclaimed Juan Guaidó.

He also thanked the support of some nations that have not joined the interference. “The Italian government has been very conscientious, and has tried to get the parties to achieve a Venezuelan solution and not to be imposing what the US Government says,” he said.

The Venezuelan diplomat highlighted the cynicism of the US government for sending alleged “humanitarian aid” to Venezuela. “We are going to be coherent, does the government that blocks you, attacks you and threatens you, is that the one that wants to offer you humanitarian aid? … In Venezuela there is no humanitarian crisis, there is a blockade and a besieged economy,” he said. He reiterated that the government of that country has assaulted the Citgo company which belongs to Venezuela, in violation of the law and the American business legal framework, “Today Mr. John Bolton writes a tweet threatening the countries that want to help Venezuela and encourages the blockade “.

Arreaza pointed out that the US wants to impose a dictatorship on the world, “that is why at the meeting of Non-Aligned Countries there is a rebellion against that dictatorship, a defense of multilateralism, the Charter of the United Nations, its principles and purposes.”