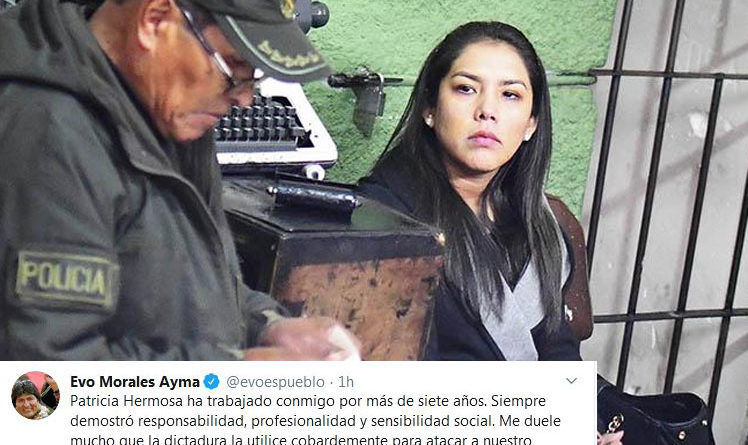 Monday Bolivia’s former president Evo Morales (2009-2019) repudiated the imprisonment of his attorney Patricia Hermosa in a ruling by the coup government.

Despite her condition of being a pregnant woman, Hermosa was arrested on Friday by the de facto authorities for carrying Evo Morales’ documents to register him as a candidate for the Plurinational Legislative Assembly.

“Patricia Hermosa has worked with me for over seven years. She always demonstrated responsibility, professionalism and social sensitivity,” stressed the indigenous leader on Twitter.

The prosecution accuses her of alleged crimes of attempted sedition, terrorism and terrorist financing despite the fact that the coupmongers actually arrested her and stole Evo Morales’ documentation to avoid registering him with the Supreme Electoral Tribunal.

Martin Irusta, Hermosa’s legal defender, rejected the precautionary measure against her defendant because there is no risk of escape or other procedural nature.

Her arrest and the prosecutor’s measure are part of the alleged political persecution against members of the MAS by those who took over Bolivian government after the coup d’etat on November 10 that overthrew Evo Morales.