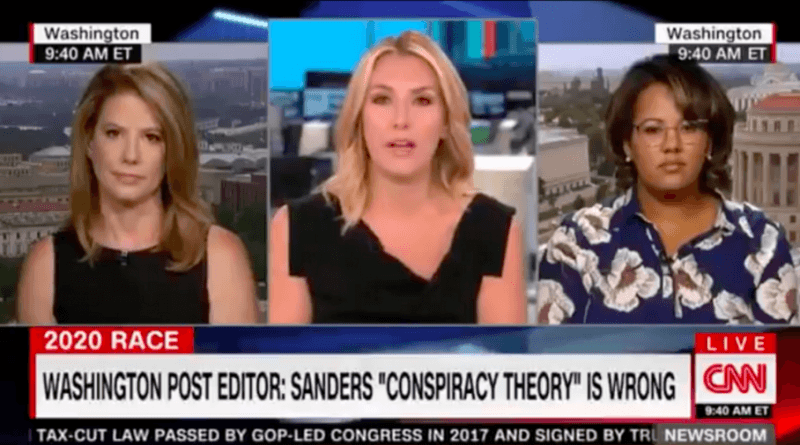 Mass media narrative managers have been throwing a fit ever since Senator Bernie Sanders criticized The Washington Post for providing unfair coverage of him at a New Hampshire town hall on Monday.

“Anybody here know how much Amazon paid in taxes last year?” Sanders asked the crowd.

“Nothing!” the crowd answered back.

“See, and I talk about that all of the time, and then I wonder why The Washington Post, which is owned by Jeff Bezos, who owns Amazon, doesn’t write particularly good articles about me. I don’t know why,” Sanders said.

The reaction has been swift and furious. Outlets ranging from NPR to CNNto Fox News have claimed that Sanders’ comments are “Trump-like” and “echoing Trump”. CNN’s segment on the story insinuated multiple timesthat there is no evidence for Sanders’ claims of biased coverage by WaPo.

“Sen. Sanders is a member of a large club of politicians — of every ideology — who complain about their coverage,” reads a statement by WaPo Executive Editor Marty Baron. “Contrary to the conspiracy theory the senator seems to favor, Jeff Bezos allows our newsroom to operate with full independence, as our reporters and editors can attest.”

All of these people are lying. During the hottest and most contentious point in the 2016 presidential primary, Fair.org documented the fact that The Washington Post published no fewer than sixteen smear pieces about Sanders in the span of sixteen hours. This sixteen-hour window included Sanders’ debate with Hillary Clinton in the tightly contested state Michigan, where Sanders went on to score a narrow but hugely significant upset victory. To say that WaPo has a history of bias against Sanders is not conspiratorial, Trumpian or lacking in evidence, it’s an intellectually honest acknowledgement of an undeniable and well-documented fact.

As of this writing I have not yet seen a single one of the outlets decrying Sanders’ comments about The Washington Post make any reference at all to those sixteen WaPo smear pieces in sixteen hours. This is journalistic malpractice, as is the suggestion that there is no evidence of bias in WaPo’s reporting about Sanders. While huffily protesting the insinuation that a plutocrat-owned media outlet might not give honest coverage to a politician campaigning on the taxation of plutocrats, these media industrial complex narrative managers are themselves churning out dishonest coverage. They’re doing the thing that they insist they don’t do.

Some have gone so far as to call Sanders’ self-evident and completely undeniable accusation of bias “dangerous”.

“This seems like a really dangerous line, continued accusations against the media with no basis in fact or evidence provided,” said CNN anchor Poppy Harlow after running a clip of Sanders’ campaign manager criticizing corporate influence in the media.

Of course, what is actually dangerous is placing blind faith in a mass media institution for no reason other than to prevent that institution’s representatives from getting outraged and indignant when you don’t.

There is no legitimate reason to give mass media institutions the benefit of the doubt in any area whatsoever; their outrage and indignation is based on nothing other than their own self-appointed position as arbiters of truth and reality. There is no law that says plutocratic media must be trusted by the public and praised by politicians, and if there were that law would belong in the toilet. Their whole entire argument, when you boil it right down, is that nobody should distrust the mass media because when they do it hurts the mass media’s feelings. This is not a valid argument to make.

This is especially true of The Washington Post, which is wholly owned by a CIA contractor and never discloses this conflict of interest when reporting on the US intelligence community as per standard journalistic protocol. This same CIA contractor, who is also the wealthiest plutocrat in the world, sits on a Pentagon advisory board and is according to some experts working to control the underlying infrastructure of the entire economy. To suggest that a newspaper that is owned by such a figure has in any way earned the benefit of the doubt is insane. The world’s most adept plutocrat did not invest in the purchase of The Washington Post because he expected newspapers to make a profitable resurgence. That did not happen.

All plutocrats, once their wealth control grows to a certain size, begin buying up narrative control to ensure the perpetuation of the status quo they’ve built their fortune upon. They all have public relations firms, many of them fund influential think tanks, many use corporate lobbying and advertising incentives, some buy up media shares, and some buy up entire media outlets. Bezos did the latter.

RELATED CONTENT: The Vindictive Campaign Against Chelsea Manning, a US Political Prisoner

No branch of the US government could get away with holding the stated position that they are entitled to the trust of the public and that any distrust is dangerous and unfounded. The entire system of checks and balances built into the US governmental system are there solely out of a distrust of unchecked power. Unchecked power of course exists in America, but no branch of its government could ever get away with openly claiming that the total trust of the public is their property that they own. Yet this is exactly what the talking heads of the plutocratic media do whenever any public figure on the left or the right has the temerity to claim that they are untrustworthy. They demand more trust than the government despite their inseparable entanglements with the same plutocratic class that is deeply entangled with that same government.

Many journalists – either for self-serving reasons or due to genuine befuddlement – are completely misinterpreting Bernie’s media critique. The person who explained it most clearly was Noam Chomsky in this 90-second answer to an equally confused BBC host. This will clear it up: pic.twitter.com/AgznEp3LB1

Journalist Glenn Greenwald pushed back against the public freakout of these narrative managers by tweeting a popular Noam Chomsky video with the caption, “Many journalists — either for self-serving reasons or due to genuine befuddlement — are completely misinterpreting Bernie’s media critique. The person who explained it most clearly was Noam Chomsky in this 90-second answer to an equally confused BBC host. This will clear it up:”

“I’m just interested in this because I was brought up like a lot of people, probably post-Watergate film and so on to believe that journalism was a crusading craft and there were a lot of disputatious, stroppy, difficult people in journalism, and I have to say, I think I know some of them,” British journalist Andrew Marr is seen saying in the video in objection to Chomsky’s criticisms of the media.

“Well, I know some of the best, and best known investigative reporters in the United States, I won’t mention names, whose attitude towards the media is much more cynical than mine,” Chomsky replied. “In fact, they regard the media as a sham. And they know, and they consciously talk about how they try to play it like a violin. If they see a little opening, they’ll try to squeeze something in that ordinarily wouldn’t make it through. And it’s perfectly true that the majority — I’m sure you’re speaking for the majority of journalists who are trained, have it driven into their heads, that this is a crusading profession, adversarial, we stand up against power. A very self-serving view. On the other hand, in my opinion, I hate to make a value judgement but, the better journalists and in fact the ones who are often regarded as the best journalists have quite a different picture. And I think a very realistic one.”

“I’m not saying you’re self-censoring,” Chomsky replied. “I’m sure you believe everything you’re saying. But what I’m saying is that if you believed something different, you wouldn’t be sitting where you’re sitting.”

WaPo’s executive editor can try to pin the label “conspiracy theory” on these observations all he likes, but there is no reason to believe that it is pure coincidence that the plutocrat-controlled media display a consistent bias in favor of the status quo upon which those plutocrats have built their respective empires. This doesn’t mean that Jeff Bezos is personally on the phone with Washington Post reporters all day telling them what to write and what not to write, but to suggest that the man signing everyone’s paychecks from the very highest level has no way of exerting any influence at all upon the publication’s overall output is just silly. Again, the man bought The Washington Post for a reason, and it wasn’t to sell newspapers.

The public should be far more skeptical of the mass media, not less. Ignore their shrill, baseless objections and continue exposing them for what they are.