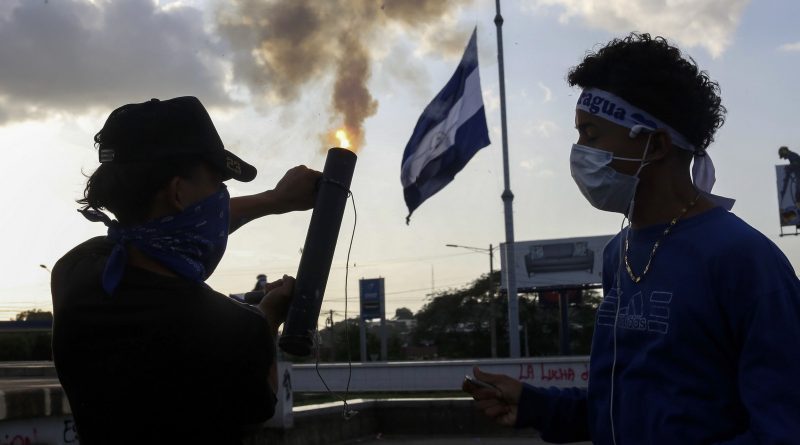 Nearly all US regime-change wars (Venezuela, Syria, Honduras, Ukraine, Libya, Yugoslavia, etc.) are wars of deception, fabrication, propaganda, coups and false flags. Sometimes there is a direct US military assault, more often not. These wars are waged by proxies, media puppets, hired hit-men, torturers, rapists, vandals, saboteurs, death squads and criminal gangs, through mock or pretextual social protest movements, denunciations by “human rights” organizations, and by internal and external economic assaults on the country’s people, transportation, commerce and communications. These were the methods of the 2018 war against Nicaragua, for which the National Endowment for Democracy (NED) alone, a well-known US regime-change shop, has spent 4.1 million USD on Nicaraguan NGOs since 2014.

There is little mystery why the US would take pains to overthrow the government of little Nicaragua (population 6 million). In addition to Nicaragua’s current and historical geo-strategic importance, President Daniel Ortega’s administration greatly improved people’s lives, presenting what is often called “the threat of a good example.”

Prior to the war and during the Ortega administration, poverty and extreme poverty were halved. Basic healthcare and education were free. Illiteracy fell from one-third of the population to nearly zero. Access to electricity went from a little over half the population to 90%. Through state subsidy programs, small and medium agricultural producers had achieved near-complete food sovereignty for the country. In defiance of the dictates of the US and the global neoliberal order, Nicaragua failed to privatize essential public services, and kept friendly relations with Cuba, Venezuela, Russia, China and Iran.

Also notable, in light of the events of 2018, Nicaragua built a national police force recognized by the UN for its humane, community policing, headed until mid-2018 by Aminta Granera Sacasa, former nun, mother of three and Sandinista revolutionary, who during her tenure was among the most popular politicians in the country.

In the eyes of the US, these achievements are capital crimes.

Pretextual student protests covered the launch of the war on April 18, 2018. The protests came following announced changes to the country’s social security programs, falsely presented by the media as austerity measures. In fact, the changes avoided the austerity plan sought by the Nicaraguan business lobby (COSEP) and the International Monetary Fund (IMF). COSEP called for student protests, which were led by relatively well-to-do students from the private universities but directed toward the Polytechnic University (UPOLI) campus, one of the two main public universities that serve poor and working class students.

The police killing of a student protestor was mis-reported on the first day of protests (the student later turned up alive and unharmed). The next day, three more killings at the UPOLI were wrongly attributed to the police.

The UPOLI was taken over by armed opposition forces (not UPOLI students) demanding the government resign. The daycare center, reproductive health center and women’s dormitories were vandalized. The leader of the UPOLI student union, Leonel Morales, publicly denounced the armed opposition, and was tortured and nearly killed.

Directing operations at the universities and elsewhere was Felix Madriaga, US raised and Harvard trained, and funded by the NED. Madriaga’s role was revealed by gang leader “Viper,” whose criminal organization was enlisted by the opposition.

Opposition tactics included 100s of roadblocks across the country meant to wreak havoc on the country’s transportation systems and economy. These roadblocks, called tranques, became opposition paramilitary bases, terrorizing the population with killings, beatings, torture, rape and extortion. A 10-year-old girl was kidnapped and raped at the tranque in Las Maderas, and the opposition attacked and set fire to public buildings as well as homes of Sandinista loyalists.

The Catholic Church hierarchy, ostensibly mediating between the government and the opposition, played a leading role in organizing the tranques, something Bishop Silvio Baez was caught on tape bragging about, as well as calling for President Ortega to be put before a firing squad.

Yet the government agreed to opposition demands to withdraw the police from the streets. For nearly two months the police were confined to barracks while the war continued. This controversial, pacifist move may have saved lives by avoiding police confrontations with opposition forces while they were fresh and well-supplied with money, food, hand-held mortar-launchers, guns and other weaponry. Meanwhile, organized civilian self-defense forces mitigated the violence of opposition forces, even managing to remove many tranques. Eventually the police returned to the streets, and after three months of war, relative calm had returned to Nicaragua, although opposition killings of police continued.

Over 250 people were killed and many more injured. More than 250 buildings were burned down or ransacked, with public sector property losses of over $230 million USD. GDP fell nearly 4%, a loss to the economy of nearly 1.5 billion USD, with job losses of up to 300,000.

Not conceding defeat, both houses of the US legislature unanimously approved presidential authority for sanctions barring Nicaragua from receiving aid from international financial institutions, a virtual economic embargo, illegal under the UN Charter.

From the very first day of the war, Amnesty International, Human Rights Watch and the media spun a relentless and knowingly false “human rights” narrative of police repression by a dictatorial state, uniformly attributing to police the injuries and deaths inflicted by the opposition or from accidents. Aiding this propaganda effort were a tiny political party and grouplets of former prominent Sandinistas, who claim left status but lack popular support and have long been part of the US-backed rightist-led opposition.

Yet Nicaraguans have waged an heroic struggle against the most powerful empire in history. The peoples of the world owe them an incalculable debt of gratitude.