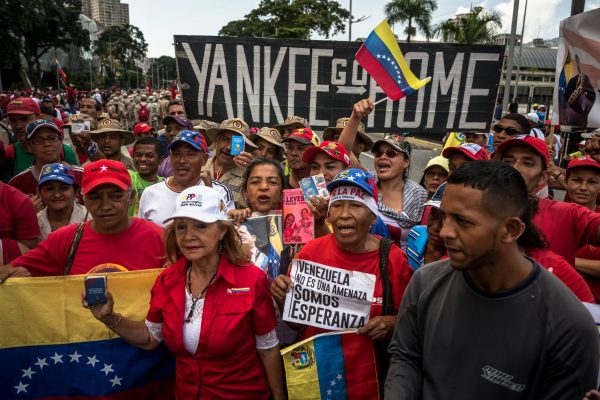 To the Editor in CHIEF

NYT – 18 May 2019 – Venezuela’s Collapse Is the Worst Outside of War in Decades, Economists

Subtitle: Butchers have stopped selling meat cuts in favor of offal, fat shavings and cow hooves, the only animal protein many of their customers can afford. This introduction is accompanied by a picture of a man in rags, pushing a shopping cart through a garbage dump site. You, NYT, say it is in Maracaibo, Venezuela, the man looking for recyclables. The photo could be from anywhere, the same with a picture further down in the text – depicting a young woman nursing a baby in the dark – you say in a typical Venezuelan blackout. This is a flagrant misrepresentation of what’s going on in Venezuela.

The New York Times is known for selecting photos from places of misery, could be slums from anywhere in the world, and placing them where it is most convenient to propagate a lie story – a story meant to demean a country in the public opinion, a country that the empire wants to subdue by bashing and insulting it – so the public – the brain dead western public, notably in the US and Europe, will tolerate or even scream for a “humanitarian invasion” from the friendly US of A.

Why don’t you NYT’s shameful liars tell the full truth?

Who is responsible for the collapse, the lack of food, medicine, blackouts – actually for all of the collapses that you described in your manipulating master piece of deceit and propaganda? – And many more ‘collapses’ that you don’t even mention?

The NYT article compares Venezuela with “Zimbabwe’s collapse under Robert Mugabe, the fall of the Soviet Union, and Cuba’s disastrous unraveling in the 1990s”. The Times is completing its baseless preposterous accusation by saying, “the crumbling of Venezuela’s economy has now outpaced them all. Venezuela’s fall is the single largest economic collapse outside of war in at least 45 years, economists say.”

The economist your article quotes is none less than the former chief economist of the IMF, Harvard professor, Kenneth Rogoff, one of the most neoliberal, bordering on neofascist, economists you could have chosen. But that figures. Impressing with name calling. No matter how biased they are; no matter that they too defend the US hardline – invade Venezuela to safe the people.

Whom do you think you impress with such names? The ignorant, of course, and – yes – there are plenty of them in the great and unique US of A; and your key objective and that of most MSM is to keep them ignorant, so the exceptional nation can continue sowing misery around the globe for the benefit of a few – killing millions and millions of innocent people, for power, the theft of resources and world hegemony.

Aren’t you – the Editor in Chief – ashamed for putting up a totally false scenario? – One of lies and half-truths, all with the objective of further brainwashing the western public – into becoming warmongers, like your criminal government, and like your criminal paper. Yes, the NYT is a criminal paper, for doing what it does: Lying after lying to sway public opinion towards war, towards killing – mass-killing, mass-murder, that’s what your government has been doing for the last 70 years – all under false flags and lies, pretending fighting terrorists, yet, fomenting terrorism, while building up the base for world hegemony – and insane profits for the American war industrial complex – the oligarchs of death.

Did you know – you must! – that the US economy could not survive PEACE; that this sadistic and satanic economy depends on war, permanent war? That the war machine manufacturing complex and its associated industries and services account for more than 50% of the US GDP? And do you realize – you should! – that the US’s economic output is one of destruction – of killing, of annihilation – instead of building and developing human knowledge and wellbeing, the intrinsic thrive of human society – evolving in conscience, integrity and conscientiousness towards living well for all?

How is that for an exceptional nation? – Indeed, an exceptional nation, a nation in disrespect of all international laws and conventions – just breaching the Vienna Convention to which the US is party – by violating the diplomatic code, invading the Venezuelan Embassy in Washington and a few years ago, by seizing Russian diplomatic properties in Washington and New York. Wonderful precedents for other unaligned and disobedient countries to prepare for – but also for other countries – if and when they wake up and take their courage into their mind and fist – to do the same to US Embassies on their soil. What would Washington do? Does Washington even consider such a possibility? I guess not. But it’s the easiest thing to do – retaliate.

It would just take a number of countries acting in solidarity, simultaneously – and Bingo! – the emperor will be standing there with his pants down.

Your paper didn’t mention this little diplomatic episode that happened a few days ago in the context of lawlessness, of breaching the Vienna Convention on diplomatic relations which entered into effect in April 1964, one of the few sacrosanct UN Conventions on diplomacy of which the US is a signatory.
—-

Back to the Venezuelan “misery” you, Mr. Editor in Chief, and the NYT are so eager to report on. Why don’t you say that the United States of America – the self-proclaimed exceptional nation, with war criminals leading it – is responsible for far most of the suffering of Venezuela, through its totally illegal (who cares in Washington about legality) sanctions, blockage of food and medical imports, theft and confiscation of some US$ 130 billion in Venezuelan assets and reserve funds in US banks and around the world, economic blackmail and strangulation that has, according to economists Mark Weisbrot of the Center for Economic Policy Research (CEPR) in Washington D.C. and Jeffrey Sachs, Columbia University, caused the death of some 40,000 Venezuelans.

This racist, misogynist and neofascist government, centered in and around the Swamp of Washington, is responsible for most of the suffering in the world today, by planting wars and conflicts – eternal war on terror; the same terrorists, trained, funded and armed by the very Washington, the CIA, the Pentagon, NATO and the spineless European puppets – for power, domination and theft of resources.

Does the NYT ever report on this? – Why can’t you, the NYT and YOU, the Editor in Chief, for once be honest and stand up for true journalism? – Because you would lose your job? Right, that’s it, isn’t it? – So, why don’t you pull out your card of ethics that you subscribed to in the school of journalism – from deep-deep down in your soul – look at it, internalize it – and think how much more you will be gaining in esteem around the world, if you bring the truth to the people, rather than keep lying – and brainwashing the world into war, misery and death? – Try it. You may be surprised.

Don’t you think, Dear Editor in Chief, sooner or later this lie-propaganda, this abject non-journalism will haunt you eventually all the way into the grave?

People will wake up, the empire will fall, it’s just a matter of time. What will you do then?

Switch sides? – You truly think, you really honestly think, people will believe you? – And I mean you and your paper, the once-upon-a-time highly reputed New York Times? That the people are so dumb to forever buy your lies, your untruths? – It’s now or never that you should switch sides. You may feel the brunt for a while from those who pretend running the world, but deep down in your soul you still have a spark of ethic left. Pull it out. Bring it to light. It will reward your life forever.
—-

Largely thanks to you, the NYT and your think-alike AngloZionist mass-media colleagues and partners in crime – which encourage people to call for wars, for invasions, conflicts and regime change, all based on your deceit, misinformation and false flags – as a disgraceful result of these lies millions and millions of people have been killed around the globe. Estimates put the figure at between 20 and 25 million since the end of WWII – all by the US, NATO, and their proxies and vassalic European minions.

By repeatedly spreading lies and deception, you are creating a false truth, indoctrinating people into consensus for wars and more wars, for invading and killing more innocent people, for the benefit of a few kleptomaniac oligarchs, stealing natural resources and, especially, of the corrupt war machine. Goebbels, Hitler’s Propaganda Minister, had it right, when he said: Give me control of the media and I convert the people into a herd of pigs. Most of the western populace is already a herd of pigs.

Venezuelans are no herd of pigs. They, and Cubans, Nicaraguans, Bolivians, Iranians, Syrians, Russians, Chinese – and many other sanctioned, blackmailed and suffocated people, have been resisting and will continue to resist, no matter what it takes to bring the empire to its knees. Let’s face it, the latest amok race around the globe dishing out sanctions and more sanctions – from Venezuela, to Iran, to China, to North Korea, to Syria, to Iraq – by the ultra-dangerous, sadistic warrior-jokers, Bolton, Pompeo, Abrams, Pence – and not to forget, the Goldie-Lock of incompetence in the White House – with a fleet of the largest warplane carriers encircling the seas of Iran and the Gulf of Hormuz – these people and the scenarios they create, are a true reflection of hopelessness befalling a fading empire.

You, the New York Times, could help bringing this abject war on terror, the merciless killing of millions to an end, accelerate the downfall of the empire, by spreading the truth – the truth that you, Editor in Chief, as well as many of your colleague journalists know – by stepping out of your MSM-box, making a 180-degree U-turn, siding with the people, the 99.99% who crave PEACE. – You would earn and receive an enormous THANK-YOU.

Peter Koenig is an economist and geopolitical analyst. He is also a water resources and environmental specialist. He worked for over 30 years with the World Bank and the World Health Organization around the world in the fields of environment and water. He lectures at universities in the US, Europe and South America. He writes regularly for Global Research; ICH; RT; Sputnik; PressTV; The 21st Century; TeleSUR; The Saker Blog, the New Eastern Outlook (NEO); and other internet sites. He is the author of Implosion – An Economic Thriller about War, Environmental Destruction and Corporate Greed – fiction based on facts and on 30 years of World Bank experience around the globe. He is also a co-author of The World Order and Revolution! – Essays from the Resistance.