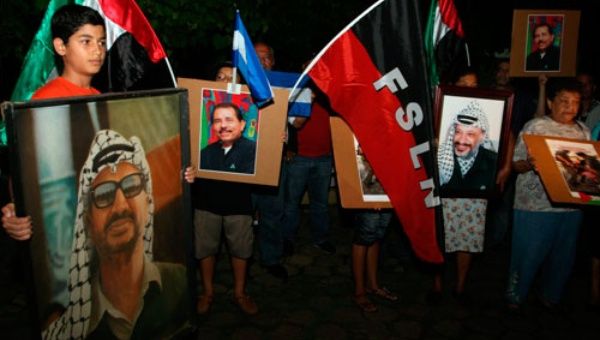 “Khuffash expressed joy at being the first Nicaraguan ambassador to Palestine, stressing that he would work toward strengthening and enhancing ties between the two countries.”

The Sandinista government of Nicaragua have sent their first ambassador to Palestine, handing over diplomatic credentials to Riyad Malki, Minister of Foreign Affairs and Expatriates on Wednesday.

RELATED CONTENT: The US is in Debt to Central America

The new ambassador will be Mazen Khuffash, a Nicaraguan official of Palestinian heritage, something Al-Maliki said “proves the role and importance of the Palestinian community in that Central American country.”

The move by Nicaragua’s leftist government is in contrast to neighboring Central American country Guatemala, whose right-wing government is one of the few states to follow the U.S.’ lead in moving their Israeli embassy to the contested city of Jerusalem.

Nicaragua’s Sandinistas have long had ties to the Palestinian movement, during the Nicaraguan revolution, the PLO sent arms to the Sandinista rebels. Then one year after the revolutionary victory, in 1980, Nicaragua formally recognized Palestine and established diplomatic relations. During that period Palestinian leader Yasser Arafat visited Nicaragua and said, “The way to Jerusalem leads through Managua.”

Palestinian news agency Wafa reported that “Khuffash expressed joy at being the first Nicaraguan ambassador to Palestine, stressing that he would work toward strengthening and enhancing ties between their two countries.”​​​​​​​