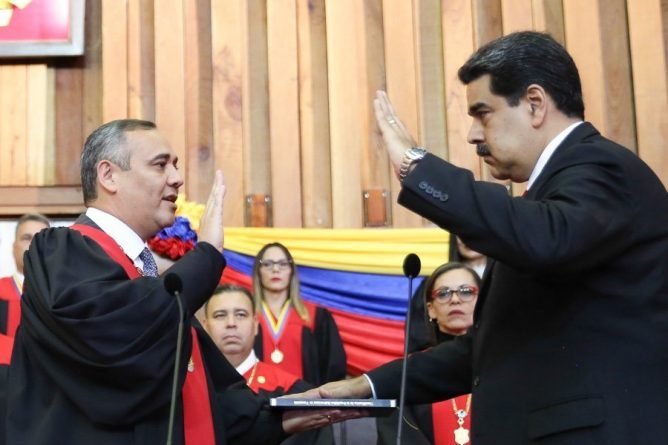 “I swear on behalf of the people of Venezuela; I swear by the legacy of our ancestors and the great Cacique Guicaipuro; I swear by Negro Primero and our Afro-descendant peoples; I swear by the Liberator Simón Bolívar and the liberating armies of America; I swear by the legacy of our beloved commander Hugo Chávez; I swear, for the children of Venezuela and the future; that I will not give rest to my arm or rest to my soul, and that I will fulfill and enforce all the postulates and mandates of the Constitution of the Bolivarian Republic of Venezuela to try to defend the Independence and the absolute integrity of the Homeland, to try to bring the Social and Economic Prosperity to our people and build Socialism of the XXI Century, as was the mandate of our Commander Chávez. I swear to our country! I swear by our people, citizen president of the TSJ! I swear by our Almighty God and I swear on my life! And I will fulfill it,” said the Head of State when he was sworn in on January 10 by the President of the Supreme Court of Justice (TSJ), Maikel Moreno.

For his new presidential term, the Venezuelan head of state was elected with 67.84% of the votes of the people, which translates into 6 million 248,864 voters.

“I say to the people: This band is yours, this power is yours, not of the oligarchy, not of imperialism. It belongs to the sovereign people of Venezuela,” he stressed during his speech.

Before the ANC on Monday

In his speech, the President said that it will be next Monday, January 14, when he presents himself before the National Constituent Assembly to present a series of announcements and economic measures framed in the Recovery and Economic Growth Program.

“I am obstinate of the indolence and the bureaucratism that damages the life of the people”, exclaimed the President in another point of his speech. “I want a fight against corruption (indolence, inefficiency and burocráticas) in all its forms of expression. It’s with you, comrades who hears me and listens to me”. Maduro also refereed to the Lima Group and their abusive and ilegal last declaration and reiterated that he gave 48 hours to all diplomats of those countries in Venezuela to correct their position specially referring to section 9 of that document, or they will face the strongest diplomatic response a country can take. At the same time he reiterate his invitation to address this issue in a CELAC summit in which all the countries of the region deal face to face with their differences and try to overcome them for the good of the peoples of Latin America and the Caribbean.

President of the TSJ: Maduro was elected in a free and sovereign electoral process

In his speech prior to the swearing, the president of the TSJ, Maikel Morero, highlighted the legitimacy of the new government of the head of state, Nicolás Maduro for the constitutional period 2019-2025, recalling that the national president was elected in a free and sovereign electoral process.

He noted that the people of Venezuela made use of the vote to define their destiny and thus deepen democracy and overthrow violence, in reference to the victory that Maduro obtained in the presidential elections of May 20, where the socialist leader was elected with 6 million 248,864 voters.

“On May 20, 2018, through the voting tool, the people deepened democracy and defeated those who sought to destroy it, this is how Nicolás Maduro was elected as president of the Bolivarian Republic of Venezuela,” stressed the president of the TSJ . Moreno stressed that the TSJ guarantees the stability of the country. “The branches of the national Public Power and especially the Judicial Power have the duty to guarantee the stability of our country and the action of their Constitution within the framework of the Rule of Law defined in the Magna Carta itself,” he stressed. From the seat of the TSJ , in Caracas, Moreno stressed that the swearing in of the president of the Bolivarian Republic of Venezuela, Nicolás Maduro for the constitutional period 2019-2025 before the Supreme Court is carried out in accordance with article 231 of the Constitution of the Republic. Article 231 of the Constitution states that “the elected candidate shall take office as President of the Republic on January 10 of the first year of his constitutional term, by oath before the National Assembly. If, for any reason, the President of the Republic could not take possession before the National Assembly, he will do it before the Supreme Court of Justice (TSJ). “The president of the TSJ, explained that the swearing in of Maduro is done before the TSJ since the National Assembly is in contempt of court since 2016 and therefore their acts are null.