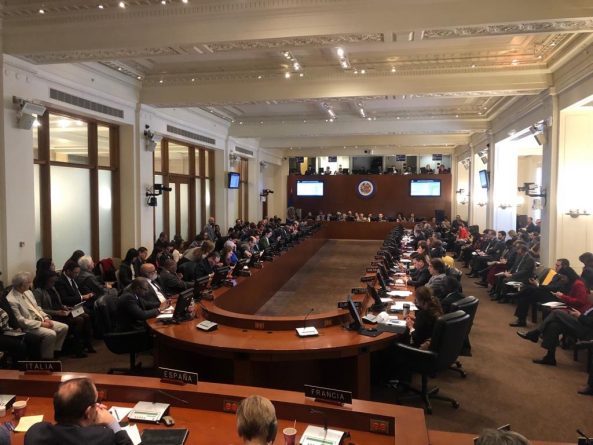 The Organization of American States (OAS) approved, on Thursday, a resolution to declare illegitimate the second term of Venezuelan President Nicolás Maduro, practically simultaneously to his oath before the Venezuelan Supreme Court. The resolution was approved by 19 votes in favor, six against, eight abstentions and one absence. “[They approved] with the 19 votes of always an illegal resolution that is not in the OAS statutes,” said the Venezuelan Deputy Minister of Foreign Affairs, William Castillo.

In the resolution, it is declared “the illegitimacy of the new period of Nicolás Maduro that started on January 10” and “calls for the preparation of new presidential elections with all the necessary guarantees for a free, fair, transparent and legitimate process”.

Among the countries that voted in favor were the United States, Argentina, Colombia, Chile, Ecuador, Canada and Brazil, members of the Lima Group.

Venezuela, Nicaragua, Bolivia and some Caribbean countries voted against and among the countries that abstained was Mexico.

“Say it well: We, Luis Almagro and the other lackeys of the United States proposed to apply the Inter-American Democratic Charter to Venezuela and they failed. They approved with the same 19 votes of always an illegal resolution that is not in the OAS statutes, “responded William Castillo, Venezuelan deputy minister of Foreign Affairs, to the announcement of the OAS on the resolution.

The Venezuelan delegation to the OAS, led by Ambassador Samuel Moncada, rejected the meeting of the Permanent Council as a “hostile and unfriendly act” and anticipated that it will not recognize “any decision that could be adopted”.

The extraordinary session of the Permanent Council of the OAS was requested by the missions of Argentina, Brazil, Canada, Chile, Colombia, the United States, Guatemala, Paraguay and Peru, members of the so-called Lima Group. Maduro won the presidential election on May 20, with 67.8 percent of the vote.