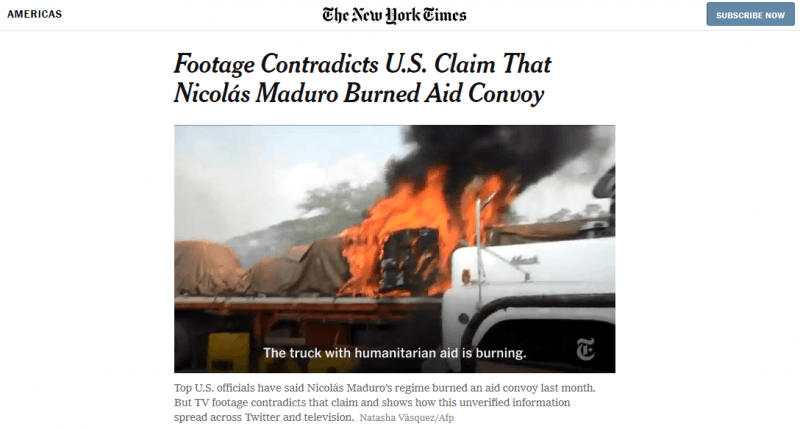 The New York Times is pretending to do journalism again.

A lot of people have been patting the New York Times on the back recently for publishing an article telling the truth about the US aid trucks burned on the Colombia-Venezuela border. According to The Times, they reviewed and submitted their own footage which they used to reconstruct the standoff at the border, revealing that the initial story told by “the US” was wrong.

While it may be nice to see The Times be forced to tell the truth about something for once, that’s what the media is supposed to do. So, instead of congratulating the largest, wealthiest, and most revered newspaper in the country, it’s probably more appropriate to tell them to f*ck off.

The Times didn’t suddenly have an urge to tell the truth. Geopolitics Alert and multiple independent media outlets published pieces last week calling the accusations against the Venezuelan government false while mainstream media spread the lie that the Venezuelan military had burned the trucks.

Among media spreading these lies from the White House as truth was the bastion of the “paper of record” New York Times. Despite being a flagship of the anti-Trump “Resistance” fact brigade, The Times had no problem parroting lies from the Trump regime, word for word, as fact.

This is why The Times shouldn’t be absolved. They helped spread Washington’s lies! Their story was falling apart and they bent to social media and independent journalism revealing the truth and now they’re trying to pretend they had no part in creating a complete fabrication.

Yet, if you look back to just a few weeks ago, The Times’ story is one of “aggression” by the Maduro government culminating in “border skirmishes.” According to The Times, the Venezuelan military were the antagonists who fired on opposition supporters.

If NYT’s reporting was to be believed at the time, all of these supporters of US-recognized President Juan Guaidó were mostly innocent, and as the Times said repeatedly: unarmed and peaceful. Now, after weeks of allowing these stories of the Venezuelan military murdering innocent civilians for no reason other than stopping a truck to circulate, The Times admits that ‘what do you know? There were antagonists among the opposition.’

The Times also reported on the aid convoy as if the attempt to bring US supplies to this often-violent opposition wasn’t, in itself, an antagonistic act. Even the United Nations and Red Cross agreed that the US aid stunts surrounding Venezuela were political theater while the Times continued to portray Marco Rubio and Mike Pence as freedom-loving altruists.

The Times did report that the opposition promised to bring in the US aid by any means necessary but the Times also didn’t have the spine to admit that meant violence. Venezuelan authorities have already found US weapons being smuggled into the country which the special envoy for Venezuela, Elliott Abrams, has a history of sending to child murdering rapist death squads.

The Times also shouldn’t be congratulated for finally taking time to do their jobs simply because this is such a rare occurrence. Since the rise of digital media, The Times has continued to cut down on their investigative reporting by laying off actual journalists to save money to have the blood-soaked hands of neoconservative “Never Trump” Iraq War architects (and friends to Elliott Abrams) write op-eds.

The New York Times poses as part of some “resistance” to the Trump administration but the truth will always be that they’re an imperial lap dog. The Grey Lady has no problem cheering Trump on for things like continuing the war in Syria and highlighting the “brave US volunteers” of the YPG fighting the other US proxies in IS.

The Times has also helped boost the worst members of Trump’s cabinet such as Nikki Haley, who they fawned over for her strong defense of Israel. If you look you can see this time and again when it comes to US foreign policy regardless of who is president. The Times was THE major paper who broadcast the Bush II administration’s lies about Iraq and they’ve done the same with Trump on multiple subjects.

The Times loves empire and the changing story on Venezuela is a result of pressure from anti-imperialist media and individuals not a real desire for truth. The Times lied about Venezuela last week and they probably will again before this week’s out.