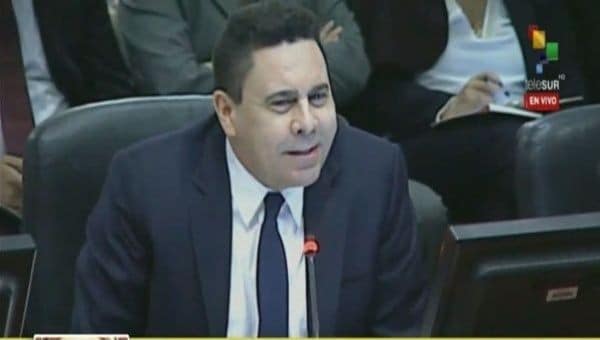 “If you want to help Venezuela, do not threaten us with war and return what has been stolen,” Moncada said in reference to the Venezuelan resources blocked by the U.S. government.

The Venezuelan Ambassador at the Organization of American States (OAS), Samuel Moncada, stated on Friday that there are procedures to remove Venezuela from the organization, and it can’t be done without the necessary 24 votes of members of the OAS general assembly.

“As the representative of the Venezuelan State and of constitutional president Nicolas Maduro Moros (…), the only way for me to stand up from this chair without violating international laws is that there is a resolution approved by the Extraordinary General Assembly of the OAS, where 24 member states vote for the suspension,” Moncada stated during his address at the OAS.

The Venezuelan representative reiterated that the only way of suspending a country from the OAS is by an extraordinary session of the organization’s General Assembly and that the resolution needs to have 24 votes to be approved. “The lie collapses, the fraud collapses, do not keep lying, get the 24 votes in the Assembly and I’ll leave here legitimately.”

Samuel Moncada also denounced that the United States government stole over USD$30 billion from the Venezuelan people. “Mr. Trump proclaimed himself the owner and lord of the natural resources, territories and inhabitants of that colony that he now calls Venezuela, and we have a real epidemic of auto-proclamations,” he said.

He then explained that the U.S.-backed coup d’etat against the Bolivarian Government is only effective in Washington, “where everyone celebrates the sacking of our nation, but it is a failure in Venezuela.” He argued that the illegally self-proclaimed “interim president,” Juan Guaido, is the one in Venezuela defending “the measures of economic suffocation against our people because they produce the necessary suffering so that the military decides to support him.”

“If you want to help Venezuela, do not threaten us with war and return what has been stolen,” the diplomat said in reference to the resources blocked by the U.S. government, as part of the unilateral and illegal sanctions imposed against the South American country.

#FromTheSouth News Bits | The Venezuelan ambassador to the OAS has condemned the Trump administration for pretending to provide aid to the people of Venezuela. #Venezuela #HandsOffVenezuela #OAS @SMoncada_VEN pic.twitter.com/0WaxIdY1m1