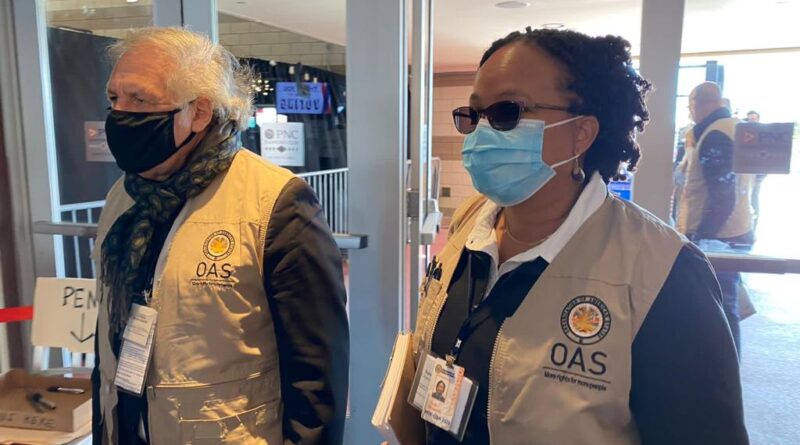 The mission noted that it is “critical” that “candidates act responsibly by presenting and arguing legitimate claims in court and not by speculation.”

The Organization of American States (OAS)—the electoral observation mission—regarding United States elections stated this Friday, November 6, that it had not “directly observed any serious irregularities” in the elections and asked the candidates to avoid “harmful speculation.”

In its preliminary report, made public this Friday, the mission indicated that it recorded that in the days following the vote a candidate—without naming him—made statements about the credibility of the process.

PRELIMINARY REPORT | Preliminary Report of the Electoral Observation Mission of the #OASinUS for the #Election2020 of November 3, 2020

The President of the United States, Donald Trump, cried “fraud” on the night of the election, and has continued to do so on the days following. On Thursday he warned: “If illegal votes count, they may try to steal the election from us.”

The campaign of the Republican magnate initiated several legal processes to challenge the results in the states of Georgia, Nevada, Pennsylvania and Michigan. In the latter, the claim was dismissed. Meanwhile protests of Trump supporters and Biden supporters have burst out in different cities.

Likewise, the mission stated that it is “critical” that “candidates act responsibly by presenting and arguing legitimate demands in court and not by unfounded speculation in the media.”

In this regard, he indicated that the observers deployed in Michigan and Georgia “did not witness any of the aforementioned irregularities.”

On Thursday, the mission of the Organization for Security and Cooperation in Europe (OSCE) criticized President Donald Trump, noting that his “baseless accusations” about systematic deficiencies in the elections “damage confidence” in the institutions.

The OAS deployed a small mission led by its Secretary General, the Uruguayan Luis Almagro, made up of twenty-eight experts from thirteen countries. Despite being questioned for its role in the 2019 coup d’état against Evo Morales in Bolivia, the OAS managed to deploy this symbolic observation delegation, perhaps following a direct request from Donald Trump, whom Luis Almagro seems to obey diligently.

Luis Almagro was photographed Tuesday in a beige vest with the OAS logo and a badge around his neck inspecting a polling station in Maryland, and the image was publicized by the OAS on its Twitter account along other images of their “work”.