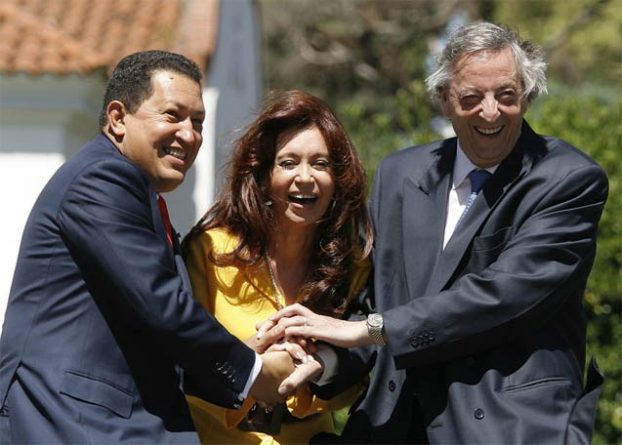 Six years after Hugo Chávez’s death, Venezuela is undergoing constant aggression from the U.S. government and the regional and world right and ultra-right, in the aim of eradicating the “Bolivarian virus” of sovereignty, popular empowerment, self-determination, Latin American unity, which he reintroduced in 1999.

Hugo Chávez, the engine that propelled the construction of the Great Homeland, the homeland of the peoples, left an orphaned nation, an orphaned homeland. Fourteen years have transformed Venezuela and the region. The great majorities, those invisible to the elites and the hegemonic media, were no longer considered objects but political subjects. Dignified life for all, empowerment of the poor: access to schooling, food, health, education.

He ventured to do what many thought (or believed) impossible, such as confronting imperialism, breaking with the customs of formal and liberal democracy, institutions and discourse.

Chávez understood that it was necessary to move beyond the phase of more than 500 years of resistance to a stage of the construction of sovereign nations, of true participatory democracy, of popular power creation, through a revolution by peaceful means, advancing towards the integration and unity of our peoples – as well as of our trade – through complementarity, cooperation and solidarity, far from the dictates of the Washington Consensus.

Six years after the death of Chavez, the main opposition spokesman, Juan Guaidó, declared that he does not rule out the intervention of the United States “if necessary”, a position outside the principles of patriotism of any nation, and in particular those of South Americans, based on the pro-independence struggle. And what is most striking is that no opposition leader has publicly challenged that statement.

RELATED CONTENT: Roy Chaderton: Venezuela Could be a Deadly Trap for the Empire

Hugo Chávez symbolized the emergence of regional emancipatory thinking of the changing era, with anti-capitalist criticisms of the Marxist style, and a humanist approach. And he rescued the “buried” idea of socialism as a utopian horizon.

Today imperial politics, the Trojan horse of the economic interests of transnational corporations, are destabilizing not only Venezuela but entire countries and continents. They seek to invade Venezuela, to appropriate its wealth (oil, gold, the Amazon), but above all they wish to annihilate by all possible means the deep Chavista sentiment of the Venezuelan people.

Today, the old democratic and republican forms are not besieged by popular revolutions but by “right-wing populisms” of an ultraconservative and dependent nature, which jeopardizes the entire globalizing project and the western democratic forms that appear to have consolidated a “new logic of capital” in this century.

The proposition is for the whole region, but it is also good for Venezuela, because without a conscious evaluation of what has been done, if the same programs are repeated without transforming the structural relations of domination, the subsequent defeat will be even more forceful.

RELATED CONTENT: After Guaido’s 23F Defeat he Started Talking About Chavez and her Daughter

A political process that does not deepen, regresses and destroys the very subjectivity that made it possible. “The governments of the left were able to resolve in their favour the contradictions of neoliberalism and they advanced towards a postneoliberalism, but were unable to advance towards post-capitalism, maintains the former minister of the Bolivian government, Hugo Moldiz.

Today we are witnessing the reconfiguration of the bipolar world, which is no longer based on an ideological dichotomy, but on geopolitics, in which domination is based on systemic chaos. “If today all the legal spaces of struggle are closed to us, what other paths do we still have?” asks Moldiz. “I don’t have answers, but what I do know is that people find new ways to open up, in relation to their own traditions and history.

Everything that has happened in these 20 years certifies that a solid democracy cannot be built in Our America without the political literacy of the population and organizing the grassroots; without structural and constitutional reforms that change the electoral structure, that will end with corrupt judiciary at the service of de facto powers, and without the democratization of communication in order to end the monopoly of the media, a decisive factor in the political-ideological dispute.

Nor can democracy be built without paying due attention to a world that has changed radically, with formal democracy in crisis, that seems to be heading towards plutocracies (practical refutation of the liberal creed), and where the hegemony of financial capital deprives resources that could be directed towards the generation of goods and employment, and productive activities, in order to direct them, divert them towards speculative activities.

Today there is no doubt that Venezuela (and the world) miss Chávez’s thought, action, creativity. The Latin American left is on the defensive: it is defending the project and is not speaking of change or the future, of what is to come and how to proceed. The left disdains the middle classes and ignores the fact that when the poor cease to be poor, they become the middle class.

Exactly two years ago, we said that it was necessary to recreate a left that was not based on melancholy or nostalgia. Why doesn’t the left reach out to youth and attract them? Because it speaks only of development and not of human happiness; it speaks of social conquests but does not offer hope, not realizing that through its inclusive policies a new proletariat has emerged, with a university base. We cannot repeat the same libretto of 40 years ago, because thus it is impossible to reach young people. Social justice is not enough, what about the future?

The left remains disunited while the right is content to follow the imperial libretti (as does the “self-proclaimed” Juan Guaidó); it has lost its connection and so there is no common struggle against the common enemy. With Hugo Chávez’s ” driving force ” there was an informal-formal coordination of at least the governors: now everyone is on their own, many are repeating Washington’s slogans… and others in disarray.

Six years ago the myth was born

His death brought much pain, immense pain to an entire desolate people in the streets. Chavista or escuálido (antichavista) who could have imagined five years ago Venezuela without Chávez, Latin America without him? And without Lula, without Néstor Kirchner, without the supporters next to him of the “ALCa-rajo” that buried the American commercial aspiration, the Bolivarian thought that sustains what he named Socialism of the XXI Century.

Chávez understood the need to create his own ideological symbol. And Chavez considered this to be based on an effective State, which regulates, drives and promotes the economic process; the need for a market, but one that is healthy and not monopolized or oligopolized, but rather, the individual, the human being. In his proposal of rupture with hegemonic capitalism, there appeared a humanist model with Marxist roots, with the need to construct his own ideological model, and to see himself through Venezuelan and Latin American eyes.

“(Formal) democracy is like a mango, if it were green it would have matured. But it is rotten and what we have to do is take it as seed, which has the germ of life, sow it and then fertilize it so that a new plant grows in a new situation, in a different Venezuela,” he used to say.

And he set in motion his peaceful revolution towards socialism, a path he charted from Porto Alegre, in one of the Social Forums in which he participated, together with all the social movements.

He survived the 2002 coup, when the people in the street demanded the return of their constitutional president. He survived the oil sabotage and a 62-day lockout. The cancer – itself, induced – ended his life when he was about to begin a new term, and initiated the myth. The dreamer, sometimes naïve, forgiving, the warrior, the one who always wanted to be a baseball player, who also suffered the loneliness of power, knew how to combine political and ideological thought with the pragmatic.

Six years after his death and the beginning of the legend, the vision of those ‘eyes’ continues to spread throughout Venezuela. The Chavista icon has been erased from the National Assembly building by the opposition leadership, but it continues to appear in every neighborhood throughout the country, in the countryside, on the T-shirts of young and old, accompanied by their yearnings, their hopes, their faith. “Hay golpes en la vida, tan fuertes… Yo no sé!” (“There are blows in life, so powerful… I don’t know!”) César Vallejo would say.

Remembering Hugo Chavez, Venezuelans try to retake the path of struggle, of hope, of giving power to the poor, of integration, of unity… of hope and of a common future, in spite of Washington’s tireless attempts and their accomplices, Latin American and European, to prevent it, along with the inefficiency and ineffectiveness of his successors in solving the serious economic-social crisis, largely produced by sanctions, piracy of funds, US and European Union embargoes.

Chavez is dead, Chavismo is alive today, in Venezuela in Latin America and the Caribbean.