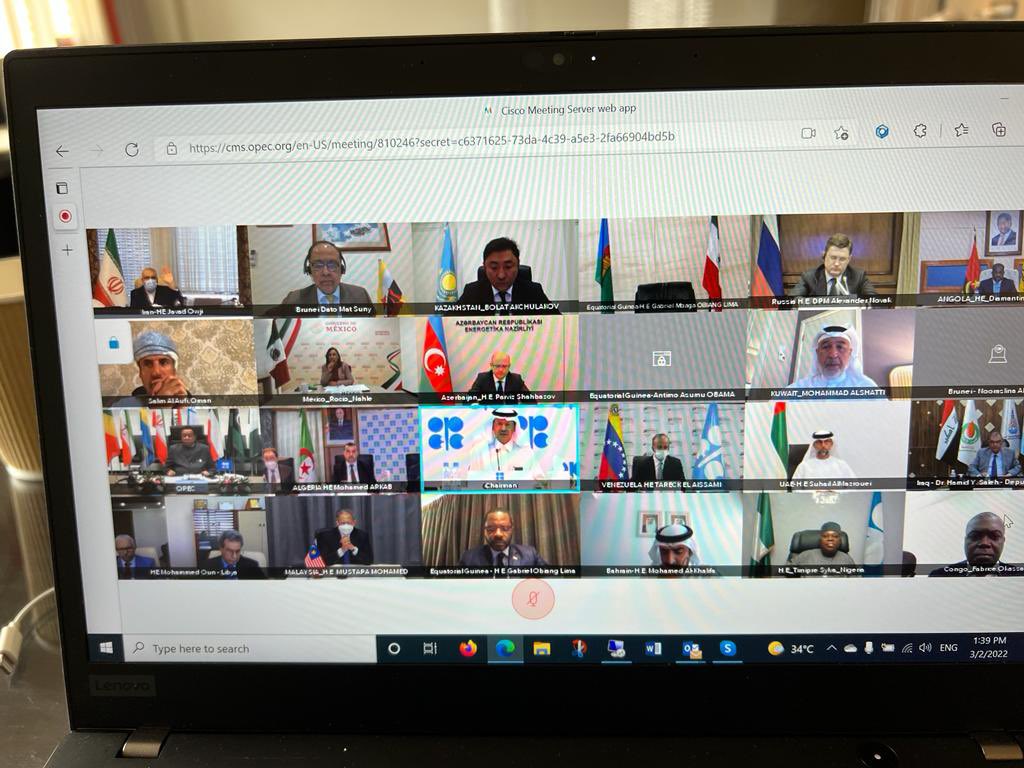 OPEC virtual meeting seen from a computer in the Vienna Secretariat. Photo: Twitter/@OPECSecretariat.

The Organization of Petroleum Exporting Countries (OPEC) and its 10 independent allies (OPEC+), including Russia, agreed to increase the production of crude oil in the month of April.

In their final statement, published on their website, OPEC and OPEC+ reported that there was a consensus between them that at the moment the oil market “is well balanced” and that “the current volatility (of prices) is not caused by changes in market fundamentals, but rather by current geopolitical events.

For this reason, they agreed to “adjust global production (of the group) by upwards of 0.4 mbd for the month of April.”

In the document both parties “reiterate the critical importance of adhering to the full compliance and compensation mechanism, taking advantage of the extension of the compensation period until the end of June 2022. Compensation plans must be presented in accordance with the declaration of the 15th OPEC and Non-OPEC Ministerial Meeting.”

Likewise, a new meeting was set for March 31 of this year.

The 26th OPEC and non-OPEC Ministerial Meeting has commenced under the Chairmanship of HRH Prince Abdul Aziz bin Salman, Saudi Arabia’s Minister of Energy, and Co-Chair HE Alexander Novak, Russian Deputy Prime Minister, together with … pic.twitter.com/BTLA4ZQv3F

The decision is in line with requests made by OPEC+, in which they indicated that they had not planned to modify the current roadmap that has been in effect since August 2021, through which they aspire to gradually recover, by next September, the production level from before of the pandemic.

The price of brent crude oil, the reference in Europe, was trading this Wednesday at 111.59 dollars after the London futures market, 6.3% more than at the close of Tuesday, reported EFE.

OPEC’s decision sets the maximum production limit of OPEC+ at 41.698 million barrels per day (mbd), of which 24.316 mbd correspond to OPEC and 16.381 mbd to the group of the ten allied independent producers.