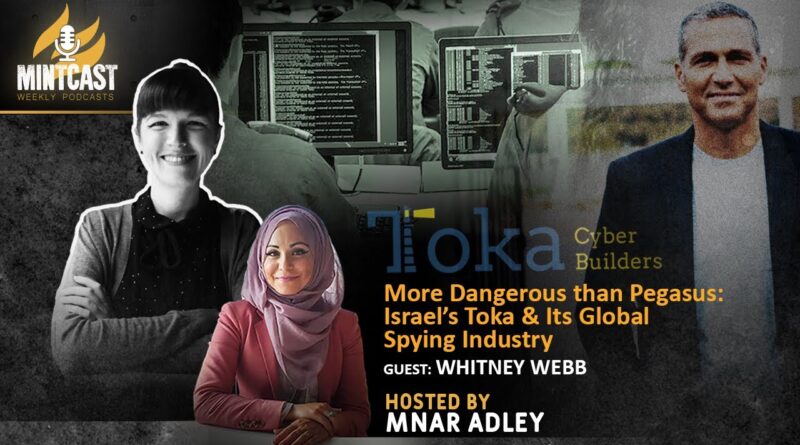 Edward Snowden has called it “the story of the year.” An Israeli spying company has been caught selling software to authoritarian regimes that have used it to surveil more than 50,000 people worldwide.

That company is NSO, founded in 2010 by former members of Unit 8200, the Israeli military’s notorious intelligence squad. Their product is called Pegasus, and it was sold to military, law enforcement, and intelligence agencies in 40 countries, among them some of the world’s worst human rights abusing governments.

On this “MintCast,” investigative journalist Whitney Webb joins Mnar Adley today to discuss Pegasus, Toka, and the global Israeli cyberspying network. Whitney Webb is a writer and researcher for the outlets Unlimited Hangout and The Last American Vagabond. She principally covers intelligence, technology, surveillance, and civil liberties. Between 2017 and 2020, she was also a senior investigative reporter for MintPress. Her latest article, “Meet Toka, the Most Dangerous Israeli Spyware Firm You’ve Never Heard Of,” was published by MintPress earlier this week.

Pegasus is able to attack the cellphones of targeted individuals without them realizing it, monitoring and recording their calls, texts and accessing other information stored on their devices. Dozens of human rights activists, nearly 200 journalists, several Arab royals, and more than 600 politicians are known to have had their communications spied on and compromised. Among those include French President Emmanuel Macron, Pakistani prime minister Imran Khan and president of Iraq, Barham Salih.

Close associates of the Washington Post journalist Jamal Khashoggi were also attacked and compromised just before his murder by Saudi operatives in 2018, strongly indicating that the information gleaned through Pegasus was crucial in this endeavor. NSO vehemently denied that their product was used in his assassination. Yet it also put out a statement insisting that it had no access to what its clients did with the software — two seemingly contradictory assertions.

The Pegasus story has made major waves in India, too, where it was revealed Prime Minister Narendra Modi had used it to spy on his political opponents in the run-up to the 2019 elections. The Indian Congress Party has accused the prime minister of committing treason. Also disclosed was that the government hacked the phone of a woman who accused the Chief Justice of India of raping her, a revelation undermining the entire justice system and the concept of a fair trial.

Yet a new MintPress News investigation asserts that Pegasus is merely the tip of the Israeli cyber spying iceberg and that another piece of software, Toka, is far more dangerous and outrageous. Toka markets itself as “a one-stop hacking shop for governments that require extra capability to fight terrorists and other threats to national security in the digital domain.” The company’s software is designed to infiltrate any device connected to the internet, not just smartphones.

Toka is a product of the Israeli national security state, having been co-founded by former prime minister, Ehud Barak, and was also designed by members of Unit 8200, leading Webb to suggest that it is a front for the Israeli government.

Mnar Adley is founder, CEO and editor in chief of MintPress News, and is also a regular speaker on responsible journalism, sexism, neoconservativism within the media and journalism start-ups.