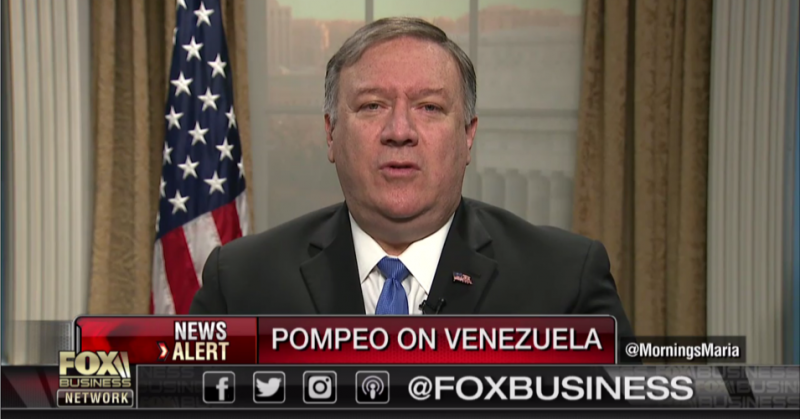 International Opinion
May 2, 2019May 29, 2019 Jake Johnson coup d’etat, failing coup, lost in space, no pasaran, pompoe in maduros payroll, Trump not knowing what to do, US Imperialism

“The team that brought you Iraq seems to thrive on death, destruction, and spending workers’ hard earned tax dollars,” said one anti-war activist

Going a step beyond the “all options are on the table” platitudes consistently parroted by Trump administration officials, Secretary of State Mike Pompeo said Wednesday the U.S. is prepared to take military action in Venezuela “if that’s what’s required.”

“The president has been crystal clear and incredibly consistent—military action is possible,” Pompeo said in an interview on Fox Business.

Trump administration officials are “trying to do everything we can to avoid violence,” Pompeo said, even as the White House expressed unequivocal support for the “military uprising” led by Venezuelan opposition leader Juan Guiado.

“In the event that there comes a moment—and we’ll all have to make decisions about when that moment is and the president will ultimately have to make that decision—he’s prepared to do that if that’s what’s required,” said the Secretary of State.

In an appearance on MSNBC just hours after Pompeo’s interview, national security adviser John Bolton echoed many of the Secretary of State’s talking points while continuing to make the Orwellian claim that the coup the Trump administration is supporting in Venezuela is somehow not a coup.

“If [Guaido] holds constitutional legitimacy as we believe, trying to take control of the government is not a coup, it’s his constitutional obligation,” Bolton told MSNBC’s Andrea Mitchell. “The coup that we’re worried about in Venezuela may have already taken place through the insertion of tens of thousands of Cuban security forces.”

As Common Dreams reported, progressive advocacy groups and lawmakers have condemned the Trump administration’s support for the attempted coup and urged the U.S. to stop interfering in Venezuela’s internal affairs.

“Bolton, Pompeo (and Guaido) say they want a ‘peaceful transition,’ even while creating chaos in the streets and calling for a military coup,” Gerry Condon of Veterans for Peace wrote for Common Dreams on Wednesday. “In recent years, we have been overwhelmed by endless wars on multiple fronts. Will Venezuela be one more such war? No, we say. This will not stand.”