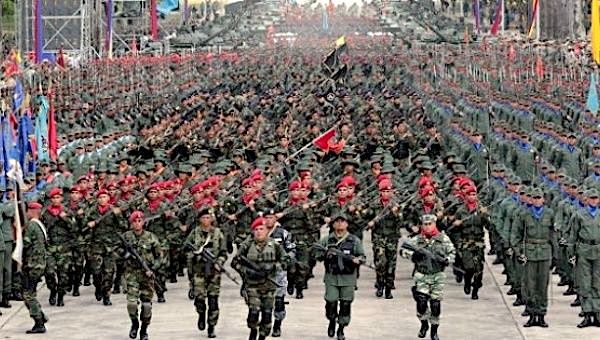 Opinion Security and Defense
May 2, 2019May 6, 2019 orinocotribune intelligence community, lost in space, no pasaran, Trump not knowing what to do, US Imperialism, us military aggression

Trump doesn’t give a farthing about Venezuela and is letting his underlings let slip the dogs of war in so long as it secures Florida’s electoral votes for Trump 2020, says Lawrence Wilkerson.

Knowing what I know about my own administration’s attempt to unseat Venezuelan President Hugo Chavez in 2002, I was not surprised when the effort was recently renewed by the Trump Administration, particularly when such arch-defenders of Latin American rights as Elliott Abrams, Marco Rubio, and Rick Scott – not to mention John Bolton – began to appear on the White House payroll.

Knowing as well that Trump did not give a farthing for what happened in Venezuela but was concentrated on what he is always focused on, domestic politics, I knew these underlings would be allowed to cry havoc and let slip the dogs of war in Venezuela so long as doing it secured Florida’s electoral votes for Trump in 2020.

What I did not know – but looking back to 2002, should have – is how utterly incompetent the CIA would be in pulling off the “soft coup d’etat” that its leaders promised Trump. The events of the past 48 hours have demonstrated that incompetence markedly, as well as the real motivations of Trump’s lackeys on Venezuela, from the shrimp-lusting-after-Cuba Marco Rubio to the bombastic former governor of Florida Rick Scott, to the pardoned criminal Abrams, to the supine and totally incompetent Juan Guaido and his backer, Leopoldo Lopez in Caracas. What a crew the GOP can muster!

And they just might have let slip the dogs of war. I know the Venezuelan military; I’ve trained some of them. They are not your usual “I want to shower after meeting them” crowd, as I would describe for instance the Honduran military. Instead, they are reasonably professional, reasonably aware of Venezuela’s historical commitment to democracy, and reasonably competent at their day jobs. They are proud of the fact that they are not Panama, i.e., a country into which the U.S. can send paratroopers overnight, kill several thousands, grab a narco-trafficker, and leave.

The majority of them, if the U.S. military arrives in Venezuela, will take to the hills – very formidable hills, with jungle-like backdrops – and they will harass, kill, take prisoner from time to time, and generally hold out forever or until the “gringos” leave. We might remember how the North Vietnamese and the Taliban accomplished this; well, so will the Venezuelans.

Were I looking down from Mars and with no dog in this fight, I might say that it would be suitable comeuppance for the sheer stupidity of the Trump gang. One might shout loudly as the quagmire develops, “Get elected now, Mr. Reality-TV man!”

But the bloodshed in Venezuela – military and civilian – and the dead and wounded U.S. Marines and soldiers will afford this old soldier no comfort at all. Instead such an outcome will make me regret even more profoundly our Founding Fathers’ grievous error in creating the Electoral College because they feared the demos in democracy.

This article was reprinted with the permission of the author.

Larry Wilkerson is a retired colonel, U.S. Army (ret.), and former Chief of Staff for Secretary of State Colin Powell.