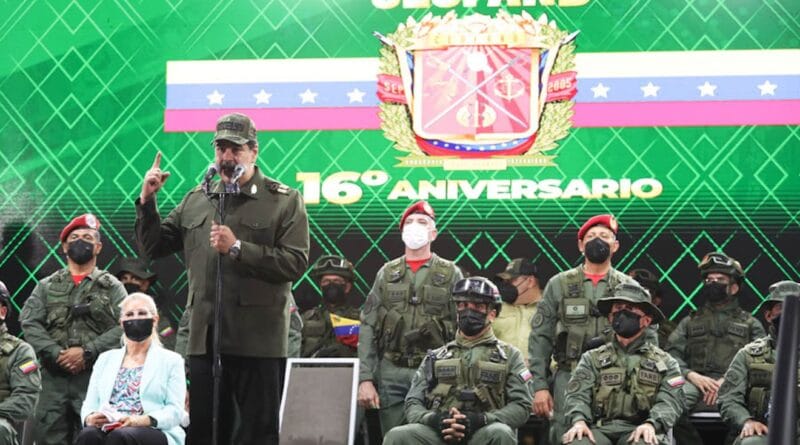 The President of Venezuela, Nicolás Maduro, denounced an infiltration into Venezuelan territory by a Colombian armed drug trafficking group known as Tancol, and called upon the Venezuelan military forces to locate and expel this mercenary organization.

During the commemorative act in honor of the 16th anniversary of the founding of FANB’s Strategic Operational Command (CEOFANB), President Maduro announced that the Bolivarian Shield 2021 will be activated in October. In this regard, he stated that “the Colombian oligarchy’s strategy is to infiltrate our country by armed terrorist groups, like the drug traffickers known as Tancol.”

“These are neither guerrillas, nor pseudo-guerrillas, nor paracos [paramilitaries],” explained the president. “They are the Tancol, terrorists: armed individuals and drug traffickers from Colombia. And these Tancol groups have been infiltrating Venezuelan territory.” Furthermore, Maduro alerted “the entire military force of Venezuela, the military leaders, to declare war on the Tancol, to find them and expel them from the country; to capture them and prosecute them. End this threat to Venezuela’s security and peace.”

President Maduro specified that the Tancol “are in groups of 30, 50, up to 100 people, trained in Colombia, financed in Colombia, brought through the border to decimate our internal security, attack our people, traffic Colombian cocaine, and carry out targeted attacks on military, police, political leaders, and the people.”

Given this, President Maduro stated that a plan has been prepared for identification and expulsion of the Tancol gangs from Venezuelan territory.

The president emphasized that peace, stability and security are the premises of the Venezuelan government. “It is what we want,” he commented. “Only with peace and security can we continue the country’s recovery effort and climb the slope to overcome the sanctions and criminal blockades against our economy, thus deepening democracy, freedom and the constitution of the Republic.”

Security Plan ready for November 21
On the other hand, Maduro applauded the announcement made by the Operational Strategic Commander, General-in-Chief Domingo Hernández Larez, who stated that the FANB is “ready to protect the polling stations and guarantee that the November 21 elections will be free; our plan for the republic is ready.”

In addition to this, Maduro commended the fact that in October, Venezuela will be close to reaching a 55% vaccination rate in the country, and “if the vaccine arrival schedule is met, by the end of October, we will reach the target of vaccinating 70% of the Venezuelan population who are in vaccination age.”

“Once 70% of the population get vaccinated,” stated Maduro, “while still maintaining health measures, we will be able, in November and December, to declare greater opening of economic, social and family activities.”